There is no hard and fast rule regarding the space needs for fish in captivity, indeed this value varies greatly between species.  However, if the only available method at your disposal is to just guess, the following method will more accurately assess the space needs of your fish as they grow. 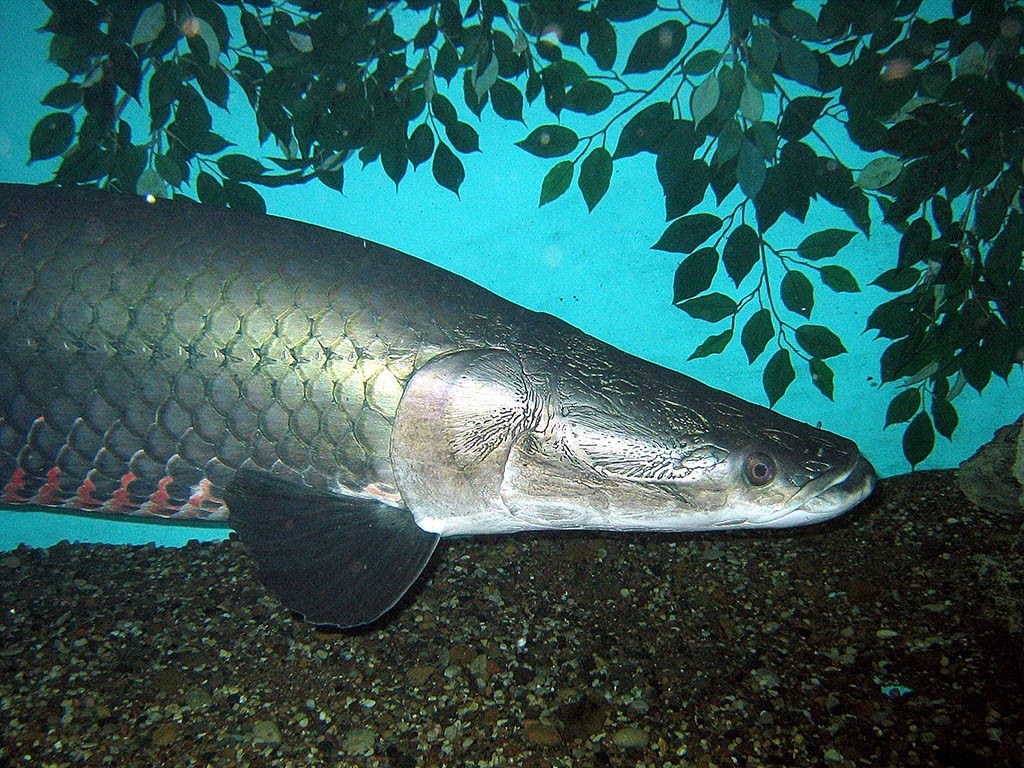 The Arapaima is a prime example of a fish species capable of outgrowing home aquariums.

The first step is to determine the maximum adult size of the fish in question.  This can be done by looking up its listing at www.fishbase.org  There will be a value given for the maximum recorded length for that species in the wild.  An informal study at one public aquarium showed that on average, long term captive fish typical of those housed in home aquariums only reached 66 to 75% of the maximum length for that species listed on FishBase.  Therefore, multiplying the given maximum length by 0.75 will give a reasonable estimate of how large that species will grow in an aquarium.  If this value is greater than 80% of width of the aquarium you have available, then that species will definitely grow too large for those accommodations (the fish need to be able to turn around freely). The depth of the aquarium is not as critical of a factor, as all commercially built aquariums are sufficiently deep for the fish they are intended to house.  The only time where an aquarium could be too shallow would be a custom built tank of odd dimensions.  In those cases, the height of the fish needs to be less than 50% of the tank’s depth.

The second step is measure the open space of the aquarium (not filled with rocks or other decorations), by adding the length and the width (front to back).  This number, (L+W) is then divided by the maximum captive size of the fish you already determined.  The resulting number must be greater than 4, and greater than 6 would be even better.  If the number is less than 4, this species is capable of outgrowing that particular aquarium and should not be acquired.

For example, the panther grouper, Cromileptes altivelis is reported by FishBase to reach a length of 70 cm.  Multiplying that by 0.75 gives an estimated captive adult size of 53 cm or 21”.  Suppose the available aquarium is 3’ wide by 6’ long.  The 21” maximum fish size is less than 80% of the 36” tank width, so the fish passes that test.  The aquarium’s length plus width is 108”.  Dividing that by the 21” maximum fish length gives a result of 5.1, or just barely large enough to house an adult panther grouper.

There are exceptions to this formula; eels don’t need as much swimming space as their long length would indicate they might.  Active swimmers such as surgeonfish and sharks need more open swimming space, with numbers greater than 8 being required.  Additionally, these calculations do not factor in carrying capacity, or in other words, how many other fish can the aquarium hold at the same time?

Understand that this calculation only determines the minimum size aquarium needed to house a particular species of fish, not the optimal size.  Many aquarium detractors will say, “how can a fish be happy in an aquarium when they had the whole ocean to swim in?”  Of course, fish don’t utilize the “whole ocean” and who truly can tell if a fish is “happy” or not?  What aquarists need to be mindful of is that the size of the aquarium used to house their fish be large enough that the fish can live their entire lives there, without developing “artifacts of captivity” such as bent fins, bruised snouts or damaged eyes that occur when a fish is kept in too small of an aquarium.