Counting fish based on “reef dandruff” 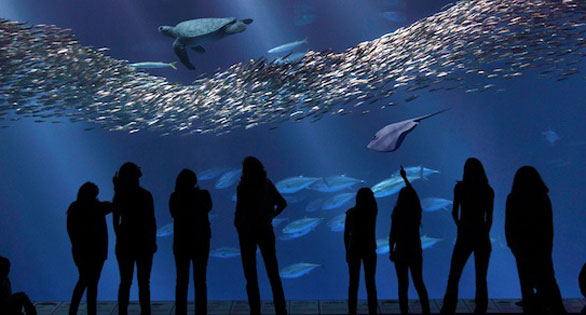 Estimating piscine populations without draining the tank or sacrificing the fish
By Stephan M. Tanner, Ph.D.

Screening water, soil, or other media for the presence of so-called “environmental DNA (eDNA)” to study microbial communities has become a well-established scientific method. In recent years, the idea has branched into testing water bodies for the presence of invasive vertebrate species such as Asian carp in Lake Erie. Now researchers from Stanford University and the University of Washington have used eDNA to assess the biodiversity in a large marine tank at the Monterey Bay Aquarium (Kelly et al. 2014).

In essence, this may allow biologists to study the population of fishes in a body of water without having to sacrifice any animals. According to the researchers, this technology could revolutionize the study of aquatic biodiversity for conservation, populations of different species for fishing quotas, or the ecological impact after the dredging a harbor or damming of a river.

Why is this noteworthy? In general, studies of biodiversity require that in order to learn what fauna is present in a body of water, the representatives of the resident species have to be captured, identified, and counted. More often than not, this process is labor intensive, expensive, and ends with the specimens being killed. Certainly, whales or large resident reef fish can be manually counted but for most species, wholesale netting, rotenone sampling, or electrofishing are the only reliable methods to assess what the water hides, especially when it comes to cryptic species. 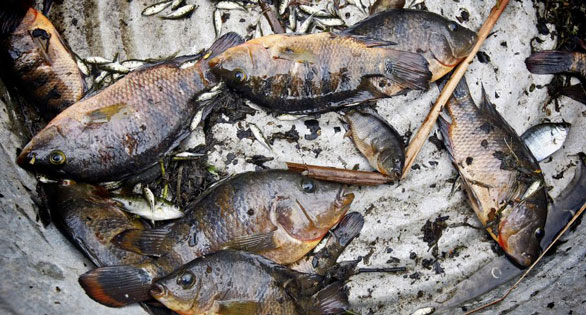 No-Kill Population Studies
Studying the trajectory of populations using traditional methods requires repeated sampling of live animals, with consequential disruption, however minor, of the biotope. The new method described in the paper is non-invasive, since the only impact comes from removing a few buckets of water.

How does this work? The source of the eDNA stems from cells the fish shed into the water from their skin, digestive tract, or gills—akin to the animal’s “dandruff.”  While very dilute, this eDNA persists for some time and in its nucleotide sequence contains the genetic information of its former owners. To access it, the water is sampled and the cells filtered out. The eDNA is then isolated and studied.

However, many challenges are involved. The released cells are so scarce that mitochondrial DNA (mtDNA) is assayed rather than the nuclear genome. There are usually hundreds of mitochondria per cell, each with a genome, while there is only one nuclear genome. Hence, it is easier to amplify part of the mtDNA. In this experiment, 106 base pairs of the so-called 12S ribosomal gene was polymerase chain reaction (PCR)-amplified and sequenced. The molecular probes (primers) used were optimized for the vertebrate version of this gene, otherwise microbial contamination would have cluttered the results. However, the small fragment only permits the identification of its former owner down to the genus or family level. In the future, a combination of various pieces and longer stretches of mtDNA should permit a more precise determination. 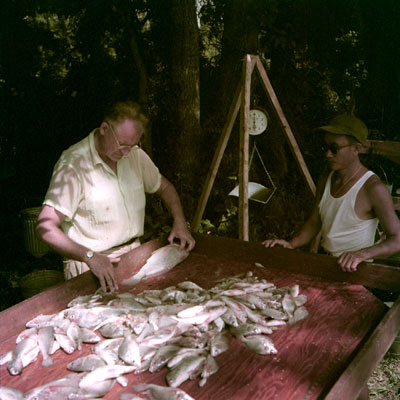 Traditional fish census studies often called for sacrificing of fishes using the poison rotenone. Shown is Auburn University ichthyologist R.H. Swingle measuring fish sacrificed in a study of the the Tombigbee River, circa 1954.

Promising but Not Yet Perfected
The results are encouraging because even at this early stage, the data provides a good picture of the biodiversity in the tank, the Monterey Bay Aquarium’s popular Open Sea Exhibit. The researchers report that there was some bias in the results, which succeeded in identifying  bony fishes known to be present while failing to detect the sharks, ray, and sea turtle in the system.

Tweaking of the method will undoubtedly improve these shortcomings. Moreover, the technology permits not only the determination of what is in the aquarium but also an indication of the relative abundance of the species. Imagine that catch quotas for food, sport or aquarium fishes could be set by checking ocean water for eDNA traces of certain species. This could theoretically allow opening up  and managing areas for fishing before physical harvest reports and trends signal that a quota change is indicated.

In theory, this technology might work to survey the population trends of fish, corals and invertebrate species in reef areas, or the degree of contamination by invasive species. In the near future, rather than collecting and perhaps killing what lives in a body of water in order to study it, we may just scoop up some of that water and check for telltale “dandruff.”

The ocean is a soup of its resident species’ genetic material, cast off in the forms of metabolic waste, shed skin cells, or damaged tissue. Sampling this environmental DNA (eDNA) is a potentially powerful means of assessing whole biological communities, a significant advance over the manual methods of environmental sampling that have historically dominated marine ecology and related fields. Here, we estimate the vertebrate fauna in a 4.5-million-liter mesocosm aquarium tank at the Monterey Bay Aquarium of known species composition by sequencing the eDNA from its constituent seawater.

We find that it is generally possible to detect mitochondrial DNA of bony fishes sufficient to identify organisms to taxonomic family- or genus-level using a 106 bp fragment of the 12S ribosomal gene. Within bony fishes, we observe a low false-negative detection rate, although we did not detect the cartilaginous fishes or sea turtles present with this fragment. We find that the rank abundance of recovered eDNA sequences correlates with the abundance of corresponding species’ biomass in the mesocosm, but the data in hand do not allow us to develop a quantitative relationship between biomass and eDNA abundance.

Finally, we find a low false-positive rate for detection of exogenous eDNA, and we were able to diagnose non-native species’ tissue in the food used to maintain the mesocosm, underscoring the sensitivity of eDNA as a technique for community-level ecological surveys. We conclude that eDNA has substantial potential to become a core tool for environmental monitoring, but that a variety of challenges remain before reliable quantitative assessments of ecological communities in the field become possible.

Stephan M. Tanner, Ph.D., is a publisher and senior editor of AMAZONAS at Aquatic Media Press.