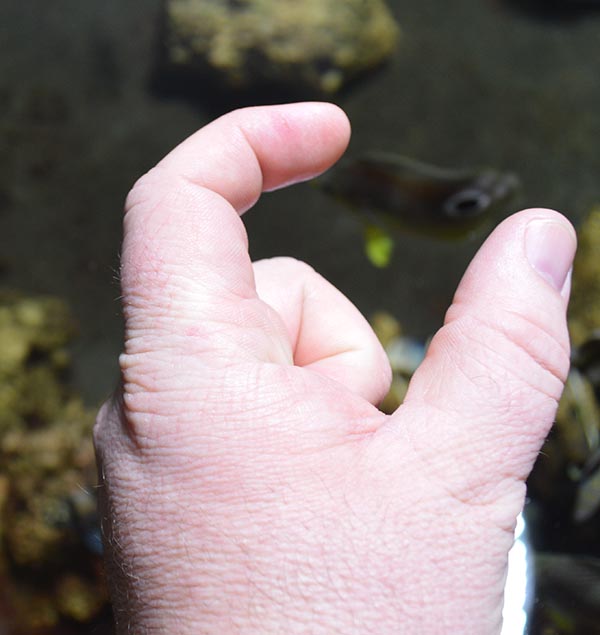 How close are we? “This Close”!

It occurred to me that sometimes we use the phrase “this close” in idle conversation, often holding up our fingers perhaps a centimeter apart, as if to give an actual indication of dimension when what we’re really trying to convey is is not something so physically concrete. Instead, we’re talking about missing the mark by “that much”, 9/10ths of the way, the slimmest of margins. We’re talking about a cry from the back seat, demanding to know “are we there yet?” with 10 minutes left on the car ride. In other words, “This Close” might be something best summed up as simply a goal not met, an accomplishment narrowly avoided, also known as hearbreaking disappointment, but on the edge of greatness all the same. Or my personal favorite twist on a classic phrase, “snatching defeat from the jaws of victory” (yes you read that correctly)!

The recent butterflyfish larviculture accomplishments by Frank Baensch & the Hawaii Larval Fish Project are nothing short of groundbreaking, but a captive-bred butterflyfish is not here just yet. As we featured in our recent excerpt of Baensch’s Hawaii Larval Fish Project article in the March/April 2014 issue of CORAL, he’s succeeded in rearing a wild collected butterflyfish egg through to post-settlement juvenile, all in captivity. But what long time CORAL readers may have forgotten, and new aquarists may be completely unaware of, is that 2 years prior, Dr. Matthew L. Witternich and Eric Cassiano caused quite a stir when they reared the same species, Heniochus diphreutes, from captive-spawned eggs to 41 days post hatch in the lab.

So when it came time to find a way to convey just “how close” these researchers really are to achieving the first captive-bred marine Butterflyfish (Chaetodontidae), I had to find a better way than holding up my fingers to my laptop to hopelessly gesture that we are “this close”.

When talking face-to-face with someone about this extraordinary set of circumstances before us, that of two independent researchers both coming “very close”, each one having achieved the milestones that the other did not and holding the missing puzzle pieces that the other needs, I like to show the progress and disconnect by holding my arms out in front of me, each hand bent towards the opposite elbow, my right arm hovering parallel over my left arm. But come on, is that really the visual you want stuck in your head? Does this sufficiently convey the status of Butterflyfish breeding and how close we are?

My international gesture for “missed connections” when trying to explain overlapping, disassociated achievements.

Ultimately, what I’m trying to convey is a thought I’ve called “running a race from opposite ends”…one group of researchers has “almost completed” rearing captive spawned butterflyfish (Wittenrich, Cassiano, and more recently Degidio with Chaetodon milliaris), and another researcher (Baensch) has now successfully reared wild collected butterflyfish eggs trough the entire larval life stage and on to a juvenile fish. Degidio’s work aside, the rest have been working with the same species to boot. The timeline overlap is immense, but what we lack is this – No one has done the whole thing. No one has completed a start to finish, “captive-spawned egg” to “post-settlement juvenile” breeding run that will solidify their title as “the first” to produce a captive-bred Butterflyfish.

And since a photograph of my forearms doesn’t quite cut it, I present to you a small infographic I’ve called “Running A Race From Opposite Ends: A comparison of aquaculture achievements with Heniochus diphreutes on the road to a captive-bred Butterflyfish – March, 2014″. 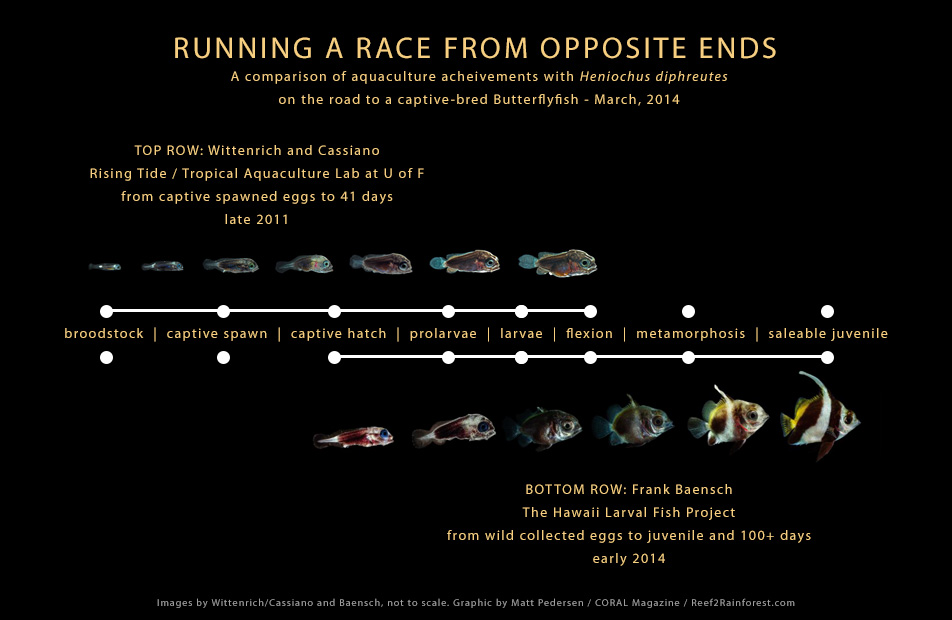 How close are we to a captive bred Butterflyfish? ^ THIS CLOSE ^ (click to enlarge)

So the next time someone asks you how close we are to seeing an entirely new family of marine fish added to our “captive bred marine fish list“, don’t say we’re “this close” – you have a better way. Send ’em a link to this.