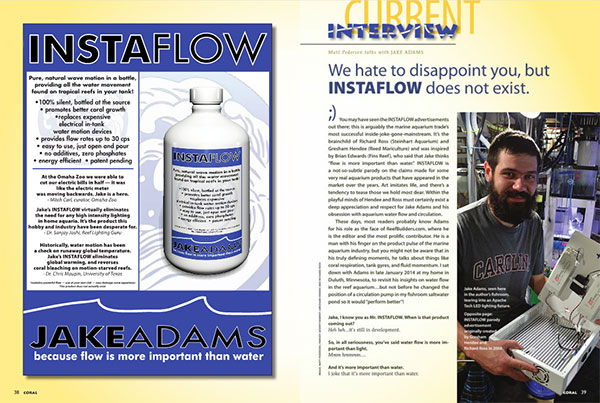 The following excerpt is a selection from “We hate to disappoint you, but INSTAFLOW does not exist.”, interview with JAKE ADAMS, by Matt Pedersen. Get it now in the March/April 2014 issue of CORAL Magazine

You may have seen the INSTAFLOW advertisements out there; this is arguably the marine aquarium trade’s most successful inside-joke-gone-mainstream. It’s the brainchild of Richard Ross (Steinhart Aquarium) and Gresham Hendee (Reed Mariculture) and was inspired by Brian Edwards (Fins Reef), who said that Jake thinks “flow is more important than water.” INSTAFLOW is a not-so-subtle parody on the claims made for some very real aquarium products that have appeared in the market over the years. Art imitates life, and there’s a tendency to tease those we hold most dear. Within the playful minds of Hendee and Ross must certainly exist a deep appreciation and respect for Jake Adams and his obsession with aquarium water flow and circulation.

These days, most readers probably know Adams for his role as the face of ReefBuilders.com, where he is the editor and the most prolific contributor. He is a man with his finger on the product pulse of the marine aquarium industry, but you might not be aware that in his truly defining moments, he talks about things like coral respiration, tank gyres, and fluid momentum. I sat down with Adams in late January 2014 at my home in Duluth, Minnesota, to revisit his insights on water flow in the reef aquarium…but not before he changed the position of a circulation pump in my fishroom’s saltwater pond so it would “perform better”!

Jake, I know you as Mr. INSTAFLOW. When is that product coming out?

So, in all seriousness, you’ve said water flow is more important than light.

And it’s more important than water.

I joke that it’s more important than water.’

So start from the top.

When I was in college I had the opportunity to do a research project. I took a look around to see what people were working on. Light is sexy. Sanjay [Joshi] had that down. Dana Riddle had that down. Everybody was trying to be the lighting expert. I liked the flow aspect, so I just started working at it.

We were in the dark ages back then. People would talk about turnover rates in their tanks—x-times turnover rate per hour. Back then it was all system pumps and powerheads. We didn’t have prop pumps to just move water—to move a lot of water.

I want to go all the way back to the coral research that you did, looking at flow rate and its effect on coral respiration. Please bring that back to the forefront, because I think that information has kind of been buried.

A coral is a very passive organism; it’s very much at the mercy of its environment and the elements. It’s dependent on the light to hit it where it is, and the flow to come to it where it is. That means we have to drive the system around for the coral. I was looking at the effect of water flow on respiration and photosynthesis, breathing and making energy. [A lot of] my research was really figuring out how to do the research.

What were you doing?

I was measuring the change in oxygen levels when applying various levels of unidirectional flow [in a contained sample of water with various small Pocillopora coral colonies]. The linchpin of the research was having a fiber optic sensor that was sensitive enough to measure minute changes in oxygen levels. So if the O2 level drops, that’s oxygen consumption; if it stays the same there’s a balance between respiration and photosynthesis; if it rises, that’s photosynthetic output. I was looking at how these changes in O2 level occurred under a few different flow speeds, and it was quite fascinating.

What were some of your conclusions?

You talk about laminar flow. One of the things I remember you bringing up is the coral itself…

You haven’t finished the question yet, but I know the answer. So ever since the beginning, it’s been all about random, chaotic, turbulent water flow—that’s where the gas or nutrient exchange takes place. What people don’t understand is that turbulence only needs to happen at the site of the coral, right where the water hits the coral. We’re talking about a microns-thick layer of water around the coral. It doesn’t have to happen in the open water.

The best way to [have turbulent flow at the site of the coral] is to have faster water. Its just like driving a car and crashing into a tree at 15 miles per hour: you’ll be walking away because you don’t experience much turbulence. You hit that same tree at 60 miles per hour? You’re going to need an ambulance.

So the old-school idea of pointing two powerheads at each another and blasting away is wrong?

It’s not wrong…it’s misguided. The reason I focus on laminar (unidirectional) flow is because…

Like what you read so far? What’s so important about laminar flow? How does Jake Adams maximize water flow efficiency? Why are gyres and alternating currents important? When are windswept corals OK? What’s are the problems, and benefits, with oscillating water flow?  What advances in reef aquarium water circulation does Adams expect in 2014? The full article is available in the March/April 2014 issue of CORAL Magazine