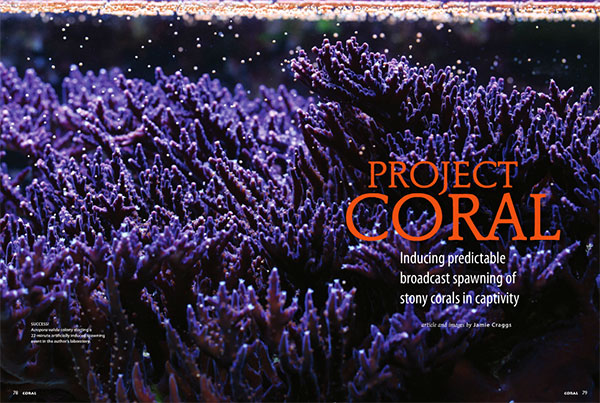 The following excerpt is a selection from “Project Coral” by Jamie Craggs. Get it now in the March/April 2014 issue of CORAL Magazine

Whilst there have been captive coral spawning events in a few public aquariums and a small number of home aquariums around the world, they have always been unplanned, incidental events, often catching the onlooker by surprise. So the challenge of spawning corals in a controlled, predictable way is considerable and presents some major obstacles.

Despite this, I’ve always felt it could be achieved if the approach was right. When we attempt to breed aquarium animals, the method is the same in principle. First we need to research the individual environmental and/or nutritional components that trigger a species to reproduce in the wild; then, using that knowledge, we replicate these conditions in our aquariums. Surely, inducing broadcast corals like Acropora to spawn in captivity should be no different, even if their environmental cues and triggers are
more elusive to define?

Two years ago my research partner, Gary Fletcher, and I started to plan a multi-year coral research project. Our aim was a simple but ambitious one: we wanted to predictably induce broadcast corals to spawn in captivity, then use the techniques we learned to start to understand how climate change might affect a coral’s ability to reproduce. After a year of planning, in January 2013 we added the first corals to the research system at the Horniman Museum and Gardens in London. It’s been a journey of discovery, and this is what we’ve learnt so far.

From frags to broodstock colony in 9 months!

It turns out there is a surprising amount of information about broadcast coral spawning out there—in aquarium articles, research papers, and even dive company Twitter feeds! Combining this information with discussions with aquarists and field observations during SECORE Foundation workshops, these are the factors we feel must be replicated in order to induce broadcast spawning in captivity: colony size, appropriate heterotrophic feeding, annual temperature change, photoperiod, and lunar cycle. The following describes how we have applied each of these factors within our coral research system and induced our first two broadcast spawnings…

We have built an open source website called the Coral Spawning Journal, www.coralspawningjournal.com. We created this so that researchers and aquarists alike can log spawning events, both in the ﬁeld and in their aquariums. Through this website we want to build an open source, comprehensive library of coral spawning events around the world. Have you observed spawning? If so, why not add your sighting to the website and be part of the future of our industry?

Using our techniques, we want to develop coral sexual reproduction in captivity for the beneﬁt of coral aquaculture and climate change research, and to do this we need funding and your help. We are planning to build an additional research system, controlled by our newly designed microprocessor, LEACS (Laboratory Environmental Aquarium Control System). Then we want to deploy an ocean monitoring buoy on a coral reef in Guam. The buoy will communicate with LEACS via live satellite feed, transferring data so our research system can replicate in real time the exact conditions on this reef. Through this we will research the impacts of climate change on coral reproduction. In late March and early April we will be running a Kickstarter crowd source funding campaign. Would you be interested in sponsoring our work? Then please visit our Kickstarter page (www.kickstarter.com, search for Project Coral) and pledge what you can. All donations, no matter how small, will be gratefully received. With your help we can do some amazing coral science!

A video of our ﬁrst two coral spawnings can be found on the Horniman’s website, www.horniman.ac.uk/coral [embedded below]. It’s well worth a look to fully appreciate the splendor of these events! —Jamie Cragg

Update 9/29/2016 –  the original video above is no longer online, but additional videos from Horniman on the coral project have been added below.

Like what you read so far? How did Craggs and Fletcher grow massive sexually mature colonies from frags in a matter of months? What did they do to incite captive spawning from these corals? What does the future hold for sexual coral reproduction in aquaculture? The full article is available in the March/April 2014 issue of CORAL Magazine