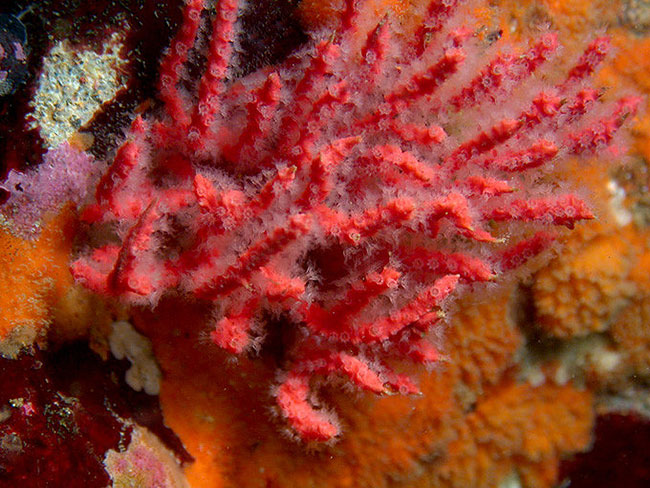 A startling splotch of vivid crimson growing on the substrate was what first caught the eye of Peruvian marine zoologist Yuri Hooker in 2002 while he was diving in the relatively unexplored waters of the Peruvian Pacific. Not a sponge, which Hooker collects from time to time, the colorful organism turned out to be a gorgonian coral, but not one he could identify.

Now a team from the Smithsonian Tropical Research Institute (STRI) and the University of Costa Rica have collected the species again and have described as Psammogorgia hookeri in a new report published in the Journal of the Marine Biological Association in the UK. 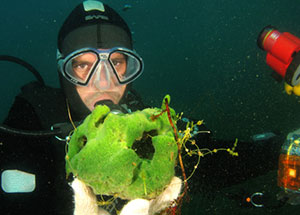 “This new species may be found nowhere else in the world,” said Hector Guzman, marine biologist and soft-coral expert at STRI. “But coral reefs and coral communities in Peru have never been systematically studied. We expect more surprises as we look at new collections.”

The new coral was collected by scuba divers from rocky ledges at depths to 25 meters (approximately 80 feet) in Peru’s Paracas National Reserve on South America’s sparsely inhabited west coast.  The corals’ hand-sized colonies are slightly smaller than the colonies of their closest relative in the genus Psammogorgia, part of the huge family Plexauridae that includes many genera of branching colonial octocorals.

The researchers and Odalisca Breedy, lead author of the report, named the coral in honor of Dr. Hooker, currently a biologist and naturalist at the Cayetano Heredia Peruvian University in Lima, Peru.

This new species was identified based on colony characteristics and examinations of the coral using both light and scanning-electron microscopy. Breedy and Guzman compared the new samples with specimens at Peru’s Ocean Institute, IMARPE and at the Yale Peabody Museum of Natural History. Most of the museum specimens were more than 90 years old because no one has collected in this area in recent times.

“With logistical support from the Peruvian National Protected Areas Service, we’re beginning to discover the amazing biodiversity of corals and marine invertebrates in the Peruvian Pacific,” said Hooker. “It’s mostly a matter of looking in the right places and inviting experts who can identify these relatively unknown and unstudied creatures.”

In an interview with Clarice Brough of Animal World, Dr. Hooker said that aquarists should not expect to see this coral anytime soon. 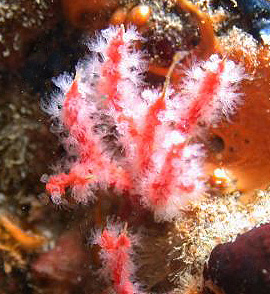 The coral has also been noted growing on live mussels being sold in Peruvian fish markets.

“Interestingly, this soft coral has been seen attached to mussel shells in local fish markets!” Brough reports. “However its availability for the reef aquarium is pretty slim right now, as finding Psammogorgia hookeri specimens in fish stores or online is difficult, if not impossible.” Some fellow members of the family are known to be photosynthetic and are sold in the aquarium trade as sea rods, sea plumes, and sea fans.

Abstract
The first record of the plexaurid genus Psammogorgia from the shallow waters of Peru is reported here. A new species (Psammogorgia hookeri sp. nov.) is described from Isla San Gallán, Paracas National Reserve. The new species was morphologically analysed using light microscopy and scanning electron microscopy. It is distinguished from the others in the genus by its small size; prominent calyces with wide lips around polyp apertures and without a special type of sclerites, but with a concentration of irregular, thorny spindles and wart-clubs around the calyx rim; coenenchymal sclerites that do not reach more than 0.2 mm long; the occurrence of conspicuous star-like radiates; and the colour of the colony and coenenchymal sclerites, which is coral red. The results increase species richness within a genus that has not been studied for more than a century, and contribute to the establishment of characters for further morphological studies. Additionally, the new species adds value to existing protected areas and to the octocoral biodiversity records for the Peruvian region and the eastern Pacific.