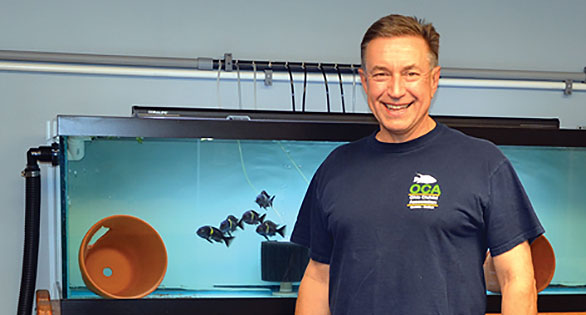 Approaching its twentieth year, the Extravaganza lives up to its name, offering world-class speakers and three days of camaraderie among hundreds of people united by their dedication to the hobby. OCA is an outstanding example of an aquarium society whose mission is to support conservation and cichlid research efforts.

Especially noteworthy is the Jim Smith Endowment Fund, named in honor of a well-loved member and OCA chairman who had a passion for teaching and getting young people involved with fishes and aquariums. This year, the OCA funded three projects: Crenicichla (pike cichlid) research with Ed Burress; Hypsophrys nicaraguensis (Nicaragua Cichlid) breeding research with Dr. Ron Coleman; and funded aquariums for the Case Western Reserve University lab run by Dr. Ron Oldfield. In prior years, the Jim Smith Fund has helped sponsor Ad Konings’ placement of anti-netting devices in sensitive areas to protect Lake Malawi cichlids, as well as captive breeding programs for Pseudotropheus saulosi and Melanochromis auratus (Auratus Cichlid). 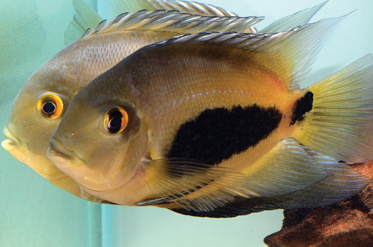 While in Strongsville, I had the opportunity to meet one of the OCA Extravaganza’s founders, Don Danko, and visit his extraordinary fishroom. Don lives in the Cleveland suburb of Medina with his wife, Marilyn, and is the senior engineering manager for Eaton Corporation. Don’s fishroom is a DIY work of art! If there were awards for thoughtful planning and orderliness, it would be a sure winner, and records kept by the Ohio Cichlid Association Breeder Award Program reveal that over the years his meticulous methods have helped Don successfully breed more than 140 different cichlids, with 19 first-recorded U.S. spawns.

Aquarium therapy
Don, 60, is a lifelong fish keeper who got started in the hobby at the recommendation of his ophthalmologist when he was in the third grade and recuperating from an eye injury and surgery. He started with a 15-gallon (57–L) community tank, but under his father’s influence, quickly became enamored of cichlids and their breeding behaviors. 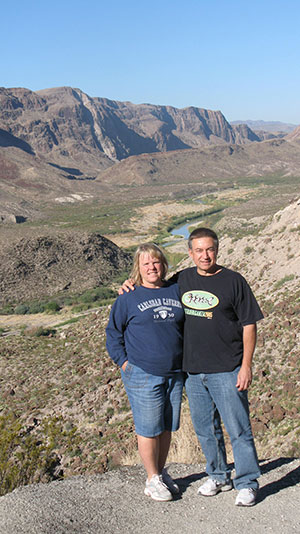 Don and wife Marilyn on on of their frequent aquatic travel trips. Image by Ad Konings.

Don has made more than 30 collecting trips to Mexico and two to Costa Rica. His favorite spots are Laguna de Media Luna in Rio Verde and the Rio Aqua Buena in Tamasopo, both in Mexico. He credits his love for those areas to the experience he had on his first collecting trip with “great friends” Juan Miguel Artigas Azas and Cleveland-area fish retailer Steve Zarzeczny.

“I had the time of my life and will never forget the experience,” says Danko. “They are both amazingly cool places, with crystal-clear water and lots of fishes to see when snorkeling. Media Luna is the home of Herichthys bartoni (Barton’s Cichlid) and H. labridens (the Curve-Bar Cichlid), both fantastically beautiful animals. I have watched the destruction of the habitat in both locations over time, through locals turning them into swimming parks and increased tourism. Additionally, tilapia have been introduced to the lagoon, as well as Herichthys carpintis (the Lowland Cichlid), which have been hybridizing with the endemic labridens.”

Fishroom Redesign
Don recently downsized his fishroom from 60 tanks to make his breeding space more manageable after moving to a smaller house. He is currently running about 17 tanks, ranging from 40 gallons to 125 gallons (150–475 L). The room is split into multiple setups featuring a 6-foot (2-m) tank on the top and two 40-gallon breeder tanks on the bottom. Marilyn has her own area of the fishroom, with 13 aquariums dedicated to pleco breeding. Don designed the room to be easy to care for and energy efficient, with an aesthetically pleasing environment. It features an automated water-change system modeled after those of Rusty Wessel and Dan Woodland, and utilizes an electronic lawn sprinkler controller programmed to run twice daily, adding fresh water and forcing surplus system water to overflow into waste drains. 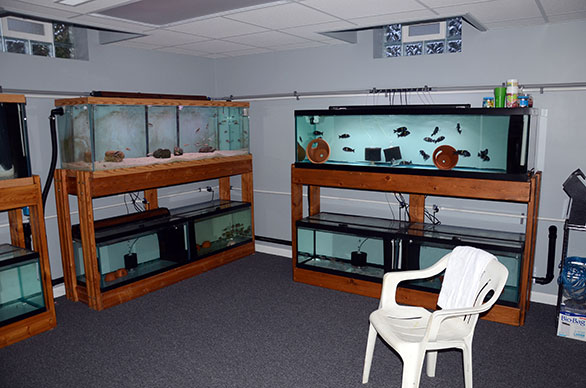 “Basically,” Don says, “hot and cold city water flows through a thermostatic mixing valve, a large carbon filter, and PVC tubing and into the aquariums via emitters with different flow ratings. Each tank is drilled and equipped with a bulkhead fitting through which old tank water runs into a line that empties into a floor drain. Taking the time to lay out and install this system was the best fishroom move I’ve ever made. I literally don’t do manual water changes anymore, except for the quarterly hydro-cleaning I do in a few tanks that employ gravel.” 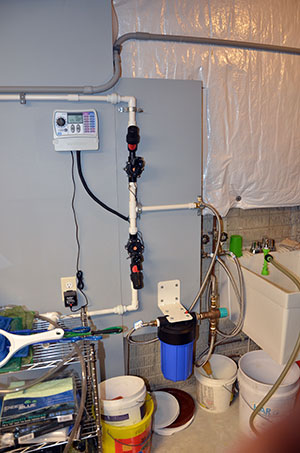 Water-changing system is mostly automatic and a significant time and effort saver, according to Don.

One approach to energy efficiency was installing glass basement-block windows to supplement with natural sunlight and reduce the use of overhead electrical lighting. Don insulated both the exterior and interior walls and uses a small, oil-filled radiator heater, centrally located and set at 75ºF (24ºC), to maintain the room’s temperature—with the Uaru tank a notable exception. Very few of his aquariums utilize in-tank heaters. Humidity is managed by a humidistat-controlled exhaust fan, as well as mildew-resistant paint on the walls. I found the layout open and inviting and enjoyed the ample space; I could easily picture club members and fish friends socializing here and admiring Don’s collection of extraordinary species.

Danko “Firsts”
While Don is best known for his work with New World Cichlids, he has also kept and bred many African species. His first U.S. spawns included such noteworthy fishes as Paleolamprologus toae (1984), Herichthys bartoni (1985), “Cichlasoma” grammodes (1986), Theraps lentiginosus (1988), Theraps coeruleus (1989), Herichthys sp. “Poza Rica” (1990), and Vieja regani (1992). He personally collected many of these species, or obtained them via annual or semiannual transoceanic trades with his good friend from the Netherlands, Willem Heijns.

Don’s first U.S. spawn of P. toae was done in this way. He had to learn how to import fish and clear them through customs and U.S. Fish and Wildlife, as they were not available in the United States. He remembers being surprised that “all the P. toae in the tank participated in spawning; it wasn’t restricted to just a pair, as I had expected. It was actually quite remarkable to watch and photograph the entire group traversing the tank together, shaking and spawning.” Don is currently keeping the fish again after almost 29 years, hoping to see the behavior replicated. 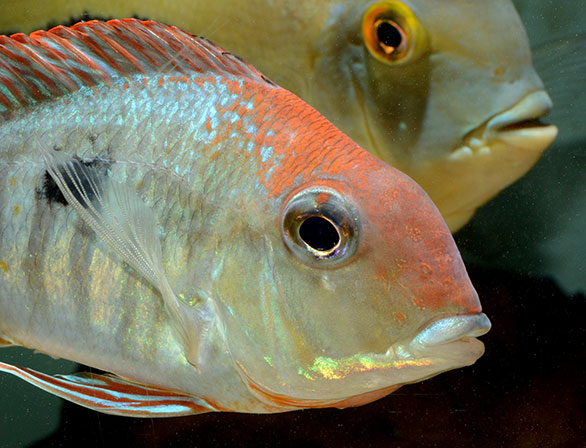 Don and Marilyn have also spawned 17 types of catfish, and current projects include L204 (the Flash Pleco), Albino Farlowella, L184 “Brilliant” Ancistrus, and L002, the Tiger Pleco. Don says that the most challenging fish he has ever spawned is discus, back in 1985. At that time, breeders were not open about the methods they used and he had to go through a lengthy trial and error period before he was able to induce successful parenting behaviors and, ultimately, rear several varieties.

However, he says his most rewarding spawning success to date has been with Uaru amphiacanthoides. He notes, “I’d had an interest in this fish for some time, but I could not find any to raise. I ultimately found what turned out to be a female at a Cleveland-area pet shop, and then later got a few pretty abused young adults from a hobbyist. As I recall, I was able to restore one back to health and that individual mated and spawned with the earlier female. The pair tended to be egg eaters, so I had to learn to artificially hatch and raise the fry. I was successful and continued rearing Uaru for several years, and this fish continues to be a favorite of mine today. Selling off those desirable fry covered a lot of fishroom expenses!” 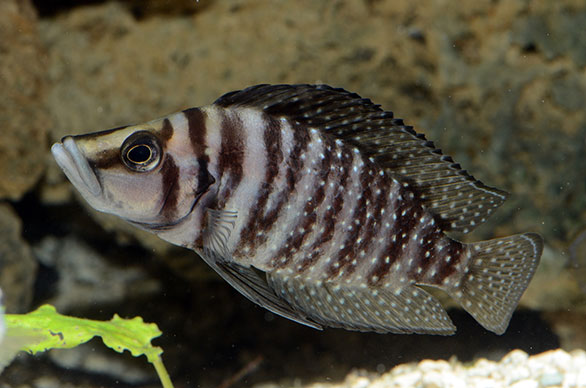 Not everything is easy, of course. “My biggest failure to date was with ‘Cichlasoma’ beani (the Green Guapote),” Don says. “A long time ago, at an ACA Convention, someone put a large sexed pair of C. beani in the Sunday auction. They were believed to be from the stock of the Sonora Desert Museum near Tucson. They were 10 inches or more in length and really cool. I kept bidding and ultimately bought them for $300, assuming I would be able to spawn them. I never got any spawning behavior, and the male kept getting ill from intestinal parasites. Ultimately, the male died, and much later the female as well. I tried again a few years later, after collecting some wild individuals with Juan Miguel near Tepic, Mexico, but I also lost all of them. Spawning them is still on my bucket list.”

To condition and maintain his fishes, Don feeds twice daily, sometimes more on the weekends. “I feed my Tropheus high-quality green flakes, with periodic feeding of vegetable-based pellets. For the Tanganyikans other than Tropheus, I feed green flake, various freeze-dried foods including krill, Mysis, brine shrimp, and Daphnia, as well as decapsulated brine shrimp. For the Tang fry, I pulverize those same foods, but incorporate a higher ratio of the decapsulated brine shrimp. For my Uaru and other South and Central American fishes, I feed predominantly freeze-dried krill, prepared food sticks, fresh spinach, and Romaine lettuce. The Plecos are fed salt-free French-cut green beans, green flake, and pellets.” (Don eats a lot like his fishes, maintaining a near-vegan diet and exercising daily.) 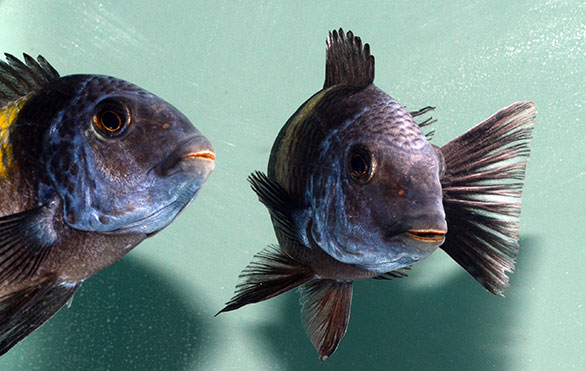 Don Danko is a big believer in engaging younger folks and children in the hobby. “I think we, as parents, should educate children about the hobby and allow them to take over responsibility for their own aquariums. Getting them involved in club activities can help, and the meetings need to be fun in order to make new members and visitors feel welcome while bringing in interesting speakers to facilitate new ideas and activities. I think getting the word out on social media to show the spectrum of awesome fishes is a great way to use the Internet to promote the hobby.

“My best advice for hobbyists who want to spawn fishes for the first time is to be resourceful—network and find out who is keeping what you want, or try to get them yourself. Research the habitat in which they live in the wild, and what they might be eating. Also, never give up! Keep experimenting with different water conditions, foods, temperatures, and other parameters. Persistence frequently pays off. Don’t be afraid to spend money to get what you want! Life is too short, so go for it!”

About the Author
Rachel O’Leary is a frequent AMAZONAS contributor and writer who lives with her husband and three children near York, Pennsylvania, where she operates Invertebrates by Msjinkzd, importing, breeding and selling rare and hard-to-find nano fishes, crustaceans, snails, and other aquatic animals and plants.