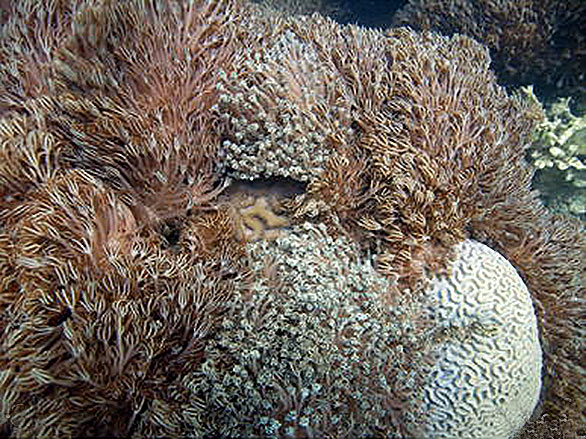 Scientists have discovered what they are calling “an invasive alien soft coral” that appears to be spreading in the southern Caribbean Sea.

The Xenia invader, apparently related to Xenia membranacea Schenk 1896, is an Indo-Pacific species known for its rapid growth rates. It has been found overgrowing reef areas off the northern coast of Venezuela, near Valle Seco, in the coastal state of Anzoategui, as reported in the journal Coral Reefs, January 2014.

“The current findings are the first report of an invasive soft coral of the Xeniidae and its expansion beyond the Indo-Pacific region,” say the authors of the paper, J. P. Ruiz Allais et al. “It appears to have been illegally introduced into Venezuela by commercial aquarists and intentionally seeded in the rocky substrate for propagation and farming purposes.

Xenia soft corals are known as ephemeral pioneering species, meaning that they are among the first organisms to fill in voids in areas following disturbances. They grow rapidly and have short life histories (reaching reproductive age and size quickly). Many aquarists can attest the abilities of Xenia to smother a reef when conditions are right.

“There has been no attempt to remove the species. The ecological consequences of the invasion, and both spatial and temporal changes in its spread, should undoubtedly be carefully monitored.” 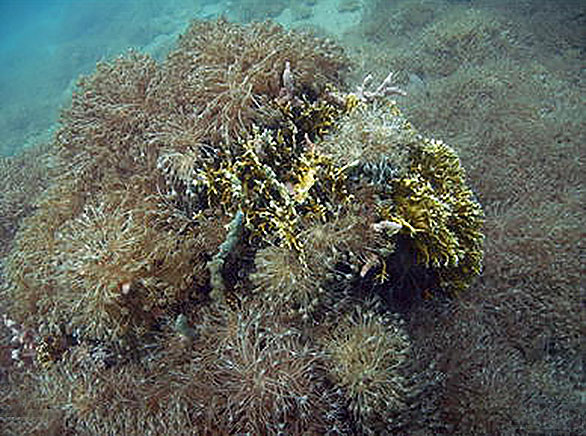 The non-native Xenia is shown here colonizing the Venezuelan reef, even encroaching on fire corals.

The authors present no documentation regarding the alleged transplanting of the Xenia into this area, but have been tracking the spread of the coral since 2007.

“An invasive xeniid soft coral with close genetic affinities to Xenia membranacea Schenk 1896 from Indonesia (C.S. McFadden pers comm) was first found in 2007 on the coastal coral community of Valle Seco (northeast Venezuela, 10°14.6 N; 64°31.70 W),” they report in the paper. “At that time, a single colony was found growing on a dead stony coral and subsequently found on coral rubble, sand, and debris.

“Since then, it has increased in abundance, spreading several km away to Conoma Bay and Mono Island, occupying ~ 20 % of the substratum. Abundance fluctuates, with a decrease during the rainy season. This soft coral inhabits both soft and hard substrata, including introduced debris, in well-illuminated habitats (0.5–4 m). 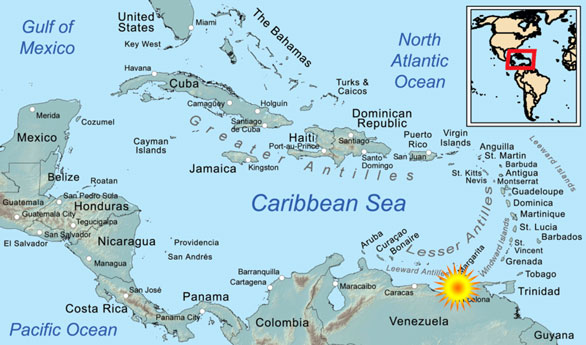 Caribbean Sea, with approximate location of Xenia introduction show by the yellow starburst.

“It overgrows scleractinian corals, such as Colpophyllia natans (Fig. 1a), Diploria strigosa (Fig. 1a), Orbicella annularis, Montastraea cavernosa, and the hydrocoral Millepora alcicornis (Fig. 1b), the latter being a principal component of the coral communities. Biodiversity at the sites has deteriorated, mainly due to the loss of living stony coral coverage.”

Other References
Benayahu Y, Loya Y (1985) Settlement and recruitment of a soft coral: Why is Xenia macrospiculata a successful colonizer? Bull Mar Sci 36:177–188