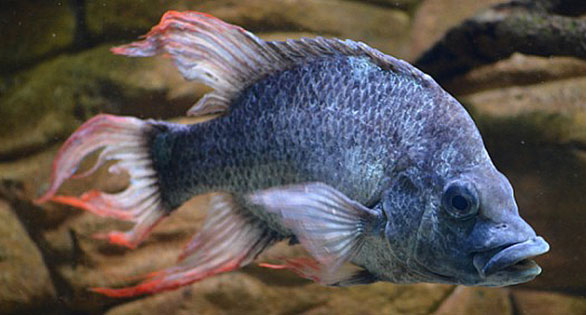 Male Mangarahara Cichlid at the Zoological Society of London, prior to the discovery of new wild broodstock.

In the end, the search for a mate to help save the critically endangered Mangarahara Cichlid, believed to be down to its last two males at the Zoological Society of London, was not found lurking in another zoo or private aquarium, but rather in a muddy watering hole in the remote back country of Madagascar.

A desperate public call for help had gone out in 2013, in which the ZSL put out a world-wide appeal seeking a female mate for the famously ugly Mangarahara Cichlid, Ptychochromis insolitus, known to the ichthyologists working to save it as “Insolitus”.

The fish was believed by scientists to be lost in the wild due to intense deforestation and river diversions created for rice farming and agriculture drying up its native habitat of the Mangarahara River in Madagascar, and two of the last known individuals – both male – were residing in ZSL London Zoo’s Aquarium.

After launching the public appeal for help finding a mate in May 2013, hundreds of private aquarium owners, fish collectors, and scientists got in touch with the Zoo’s Aquarium Curator, Brian Zimmerman, to offer up advice, support and suggestions. 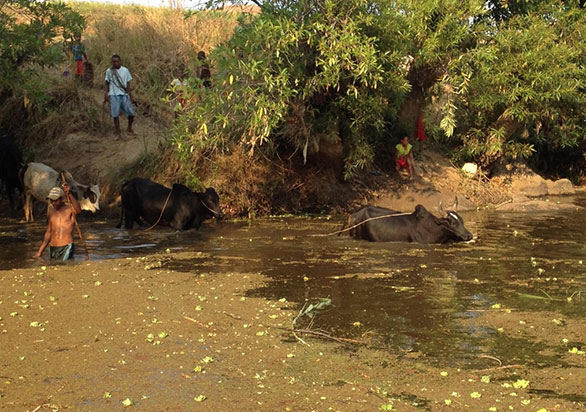 Looking Homeward
One of those to respond to the appeal was a farm and business owner in Madagascar, who recognised the fish as one he’d seen in a secluded north-Madagascan town.

An exploratory expedition was organized, led by Brian Zimmerman and Kienan Parbles from ZSL London Zoo with aquarists from the Toronto Zoo in Canada. The team would spend almost three weeks in mostly discouraging search of shallow, muddy unpromising streams in barren, deforested lands in northeastern Madagascar.

After days of search along barely passable dirt tracks, and rapidly losing hope of finding the cichlid, the team visited a tiny village built on the edge of a now-disconnected tributary from the Mangarahara River.

With help from local villagers, areas of water were cordoned off using nets to mark the search areas. Initially finding only other native species, the team were ecstatic when they finally found the first one of the last remaining Mangarahara cichlids in existence. 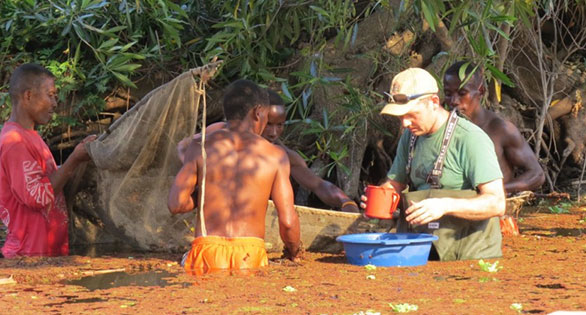 Collecting “Insolitus” in a shallow, remote watering hole in an area where they were believed to be extinct. Image: Tim McCaskie/ZSL.

Brian Zimmerman said: “We are simply thrilled that we found the Mangarahara cichlid surviving in Madagascar.”

Some 18 live fish were collected by the team and a throng of excited local volunteers in a pool shared by three cebu (“Zebu”) cattle.

“We weren’t holding out much hope of finding any fish in the wild, as so much of the Mangarahara River now resembles the desert because of deforestation and intensive slash-and-burn agricultural use.

“These cichlids have shown remarkable survival skills, and managed to find one of the very last remaining water sources to live in, but their numbers are tiny and the non-flowing water is not an ideal habitat for them. We’re now doing all we can to protect these remaining fish.”

Rather than risk transporting the animals home, the team delivered them to an aquaculture farm in Madagascar where it is hoped that a foundation breeding stock can be built up.

As part of ZSL London Zoo’s Fish Net conservation project, which focuses on protecting freshwater species, conservation plans are made to bring the species back from the brink of extinction.

SOURCES
From materials released by the Zoological Society of London.

ZSL Blogs: In Search of the Mangarahara Cichlid, by Kienan Parbles with images by Tim McCaskie.