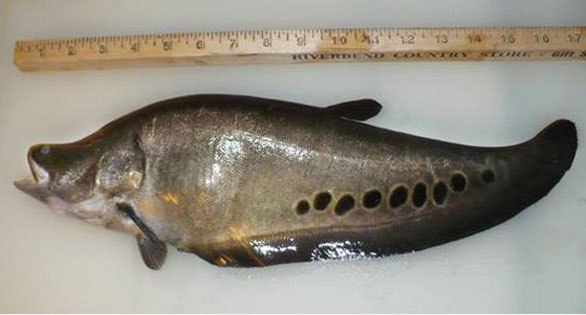 Clown Knifefish, Chitala chitala, found in a coldwater pond in the New England state of Vermont.

A Vermont man discovered something highly unusual while fishing outside of the Vermont State Capital of Montpelier last week. An exotic fish species known as a Clown Knifefish, native to Southeast Asia, was found dead near the boat ramp on North Montpelier Pond, a water reservoir and popular fishing lake covering about 72 acres.

The angler took a photo of the fish and contacted Shawn Good, fisheries biologist for the Vermont Fish & Wildlife Department, to identify it.

“This was likely someone’s pet,” said Good. “The Clown Knifefish (Chitala chitala) is a popular species when they are young and small, but they can often outgrow the confinement of hobby aquariums.”

Although the specimen discovered in North Montpelier Pond was only 17 inches (43 cm) long, the species is capable of growing to nearly 40 inches (102 cm) and has the potential to be a voracious predator of other fish. They cannot survive in temperatures below 55 degrees Fahrenheit, so this one may have quickly perished in the cold water.

“Unfortunately, many aquarium owners believe they are helping their pet by releasing it into a nearby waterbody,” said Good. “In reality, the illegal release of aquarium fish is a common source of invasive species introductions.”

The fish was found approximately 40 miles from the U.S. offices of AMAZONAS Magazine, where Editor James Lawrence said: “These incidents make us all look bad. Aquarists with unwanted fish should return them to their local aquarium shop for resale or to be euthanized. I’m sure our local independent store would have taken in this fish to keep it from being released.”

There have been dozens of known introductions of invasive species into North American waterways from people releasing aquarium species, including fish, plants and invertebrates. These infestations can devastate native aquatic ecosystems, introduce disease, disrupt recreational and commercial fisheries, and cost millions of dollars for control and management.

“If this introduction had been a fish species that is able to survive Vermont’s cold water temperatures such as a snakehead, we may have had to take drastic measures to reclaim the waterbody,” said Good. “When this happens, we are forced to eliminate all of the fish in the pond and then rebuild the pond’s fish stock with native species.”

Good advises owners not to release unwanted aquarium fish and plants into the wild, but instead to give them away to another aquarium owner or a pet shop. “If no other options are available, you can dispose of the fish by placing it in a container of water and putting it into the freezer, as cold water is a natural anesthetic to tropical fish.”

Releasing aquarium fish and many other fish species into Vermont waters is illegal and punishable by a fine of up to $500.