Exotic and fascinating in their behaviors, the livebearing freshwater halfbeaks deserve to be better known by aquarium keepers.

AMAZONAS Editor Hans-Georg Evers takes the reader into the remote waters of Sulawesi in search of a number of halfbeak species that could make exceptionally interesting aquarium inhabitants. “Quirky” is how Evers describes them, admitting, “I put my heart and soul into finding and describing them for this issue.” 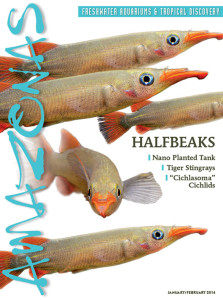 • Tiger Stingrays: Startlingly beautiful, Potamotrygon tigrina is a Holy Grail freshwater elasmobranch coveted by aquarists throughout the world. In this issue Jennifer O. Reynolds, a senior biologist at the Vancouver Aquarium, provides a look at efforts to breed Tiger Rays in captivity.

• “Cichlasoma” Mysteries: These big, fiesty Central American cichlids display flamboyant colors when in breeding mode, but identifying new wild imports can be a challenge. Cichlid expert Thomas Weidner recounts his own puzzlements over “Cichlasoma” ornatum and “Cichlosoma” gephyrum and provides the reader an image gallery of related species, including the glorious Red Terror, “Cichasoma” festae with his own accounts of husbandry and breeding attempts.

• Nano Planted Showpiece: With more than 50 species of plants carefully tended in just 18 gallons of water, Colorado graduate student Sumer Tiwari has created a spellbinding small-tank world that has caught the eye of veteran hobbyists and aquascapers. Sumer reveals his tricks and techniques, including rare plant selection and installing an affordable LED lighting system.

•Christoph Kobald describes his success breeding the so-called Candy Stripe Plecostomus or Rio Negro Peckoltia L 135— a rare and beguiling species • Rachel O’Leary visits the fishroom of Kris Weinhold, the talent behind Guitarfish.org • Juan Miguel Artigas Azas takes the reader in search of rare and unusual fishes in the waters of the Rio Negro in Brazil • And much more…..