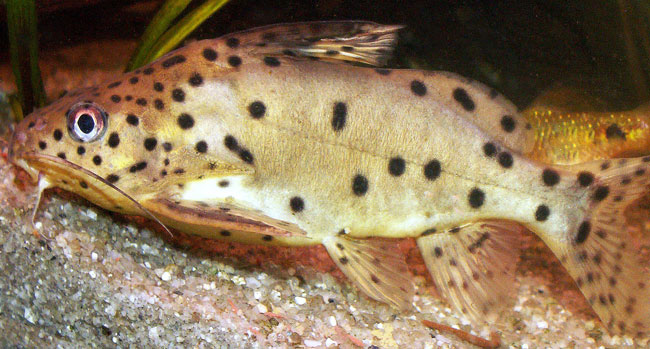 Synodontis njassae, the The Malawi Squeaker Catfish, member of a genus that can live for decades in captivity.

In October 2013, the AMAZONAS Magazine editors posed this question to a group of the magazine’s readers in an online SURVEY:

What is the oldest aquarium fish you have ever owned?
Please include age in years and the species common name or scientific name.

John Boniface: I have a Koi Carp (Cyprinus carpio) that my grandfather first bought in 1963, making it at least 50 years old. It is still hale and hearty and so domesticated that it will let you lift it out of the pond …  I reckon that it probably weighs in at around 7 to 8 kgs.

David Keane: Synodontis nyassae. Bought 32 years ago this November; still going. Closely followed by a Chromobotia macracantha, owned by me for 29 years (as the second owner!) and still going.

Sue Scimeca: Two  Clown Loaches (Chromobotia macracanthus) I purchased them from a friend, who sold me his tank and all the fish in it, in 1993. They were about 5″ long then. They are still very much alive and happy in that one tank I still have, these 20 years later. I’m guessing they have to be at least 25-28 yrs old now considering how large they were when I first got them.

Phil & Jan Benes: Distochodus sexfasciatus, 26 years old. Also have a Redtail Catfish that is 25 and a Scleropages jardini, Australian Arowana, that is 19 years old.

Daniel Anderson: I had a Golden Severum that lived to be over 22 years old. The fish was purchased as a baby by my sister-in-law about a month after my nephew, Paul, was born. When Paul was 16, she gave the Severum to me. I had it in my home tank for over 4 years before I sold it to a friend. I saw the friend several years later and the fish was still alive and well-—at least 22 years-old that I know of.

Jack Mullen: Common Pleco was 21 years old when he passed.

Pamela Wildt: A Pleco, named Wally, aged 13 years. He lives in a 75-gallon tank and is quite peaceful.

Michael Zajac: Corydoras aeneus,15 years.  This was a fish that I spawned and spent its entire life in a 50-gallon tank.