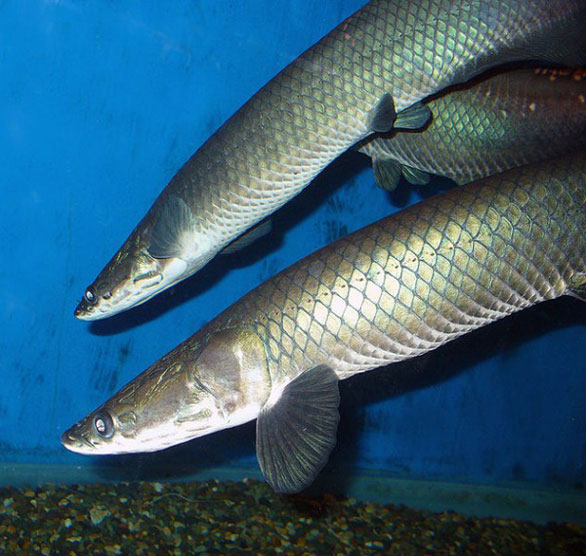 A new species of giant arapaima, South America’s largest freshwater fish, has been described from the central Amazon in Brazil, and scientists say the discovery raises questions about what other related species remain to be discovered.

They also believe it highlights the potential for ecological problems when animals are relocated from their native habitats.

“Everybody for 160 years had been saying there’s only one kind of arapaima,” saya Dr. Donald Stewart of the SUNY College of Environmental Science and Forestry (ESF) at Syracuse University, who made the discovery. 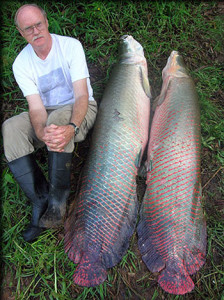 Dr. Donald Stewart of the SUNY College of Environmental Science and Forestry (ESF) at Syracuse University with two of the newly described arapaima. Image: SUNY ESF (Click to enlarge.)

“But we know now there are various species, including some not previously recognized. Each of these unstudied giant fishes needs conservation assessment.”

The discovery was reported in a paper Stewart published this month in the journal Copeia.

For two centuries, arapaima have been among the most important commercial fishes in freshwaters of the Amazon. “Arapaima have high economic, cultural and scientific value, but their diversity has been overlooked for too long,” Stewart says.

Four species of arapaima were recognized in the mid-1800s, but in 1868, Albert Günther, a scientist at the British Museum of Natural History, published an opinion that those were all one species, Arapaima gigas. Over time, Günther’s view became the prevailing wisdom.

“Until this year, no taxonomist has questioned Günther’s opinion about these iconic fishes,” Stewart wrote.

That lack of inquiry changed, however, when Stewart began studying the genus in Guyana and Brazil. “If you’re going to do conservation biology, you have to be sure about the taxonomy of the animals being studied,” he said. “If each study area has a different species, then results from one area should not be applied to manage populations in the next area.”

Delving into scientific literature from the 19th century and examining original specimens preserved at the National Museum of Natural History in Paris, Stewart concluded that all four of those originally described species were, in fact, distinct. Earlier this year, Stewart re-described one of those original species (in a paper published in the March issue of “Copeia”) and summarized status of the other three species. Stewart’s most recent discovery came when he examined preserved arapaima at the Instituto Nacional de Pesquisas da Amazônia in Manaus, Brazil. This new description brings the total number of species to five. 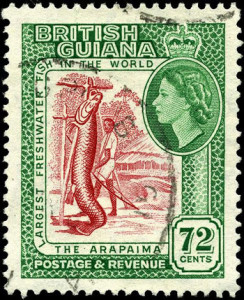 Huge arapaima dwarfs a fisherman on this postage stamp from British Guyana, 1954. (Click to enlarge.)

The recently identified specimen was collected in 2001 near the confluence of the Solimões and Purus rivers in Amazonas State, Brazil. It is distinguished from all other arapaima by several characteristics, including the shape of sensory cavities on the head, a sheath that covers part of the dorsal fin and a distinctive color pattern. Its scientific name, A. leptosoma, is in reference to its slender body.

Arapaima Aquaculture
“Failure to recognize that there are multiple species has consequences that are far reaching,” Stewart said. “For example, there is a growing aquaculture industry for arapaima, so they are being moved about and stocked in ponds for rearing.

“Eventually pond-reared fishes escape and, once freed, the ecological effects are irreversible. A species that is endangered in its native habitat may become an invasive species in another habitat. The bottom line is that we shouldn’t be moving these large, predatory fishes around until the species and their natural distributions are better known. Given the uncertainties, precaution is needed.”

There are unconfirmed reports of a giant fish on the loose in Kenyir Lake, Malaysia, where one newspaper dubbed it the Kenyir Monster.  It is believed by some to have contributed to deaths of two men in June, 2009.

In their home waters, arapaima are the most historically overexploited fishes of the Amazon Basin, having been subjected to intense and largely uncontrolled fishing pressure for at least a century. “Abundances of arapaima in large expanses of their natural habitat today are near-zero, largely as a consequence of overfishing,” says Dr. Leandro Castello, an authority on arapaima in Brazil. “The likely impacts of this magnitude of overfishing on species diversity are not good.”

Stewart says that the newly discovered species is on display in a public aquarium in the Ukraine, where it was identified as Arapaima gigas, the single name that has been applied to all arapaima for the past 140 years.

Stewart believes that Arapaima leptosoma already is being cultured and exported from South America, but under the wrong name.

Arapaima leptosoma in the Sevastopol Aquarium.

Stewart’s work was supported by ESF and the National Geographic Society.