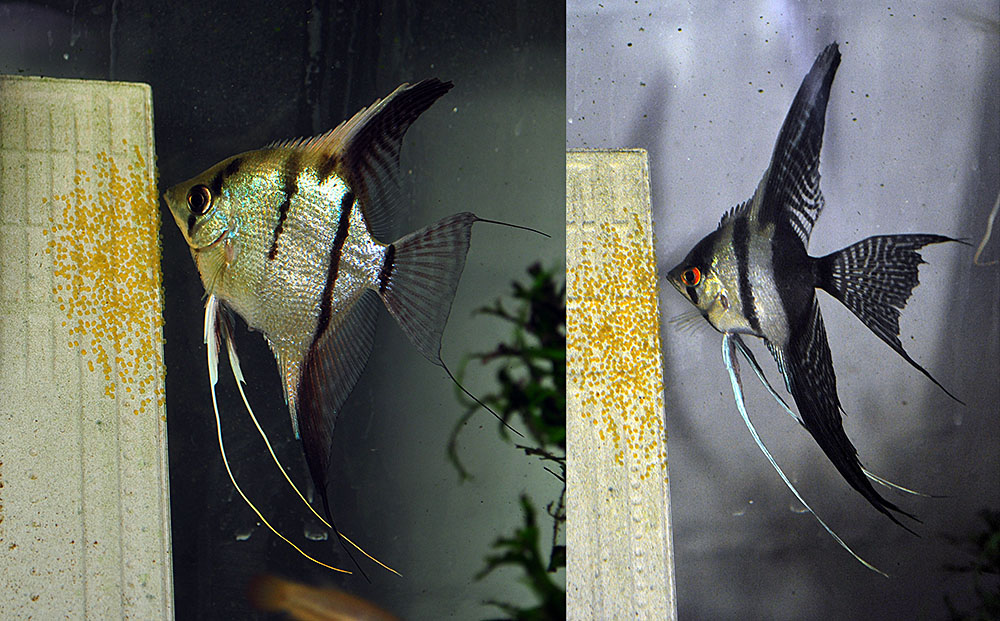 Female (left) 50% wild Silver, and Male (right) Haflblack Silver Veil Angelfish tending one of their first nests, this one 6/19/2013

Whether or not to incubate the eggs of your fish artificially has been a long running debate—certainly as long as I’ve been breeding fish and no doubt long before I ever started.

Mathias Eberhardt spoke of the downsides to artificial incubation our interview with Eberhardt in the current (November/December 2013) issue of AMAZONAS Magazine, suggesting that “artificially reared fish are subsequently difficult to breed,” in his case referring to problems with female Tropheus spp. often eating their eggs before learning to carry fry to term. “Naturally reared fish do not have this problem and carry out broodcare reliably from the beginning,” Eberhardt believes.aa

Still, there are times when natural brood care fails (whether parents are egg / fry eaters or other inhabitants are to blame), and there are times (which Eberhardt eluded to) where emphasis is on maximizing production (whether for commercial or conservation motives).  In the case of the Angelfish pair shown above, I had an additional reason to pursue artificial incubation—to not only maximize production, but to determine whether this new pair was fertile.

Given my design of broodstock tanks for Angelfish production, allowing natural “parent-raising” has always meant that babies are goners once they are free swimming, so ultimately I have relied on artificial incubation for the production of my fish. I did a lot of researching and reading on the internet before ultimately coming up with a methodology that is so consistent that I can reasonably assume that if the eggs foul, it was a problem with the eggs, not the incubation.  Here’s how I do it. Part 1 – Spawning Substrates For starters, I give all my angelfish pairs removable substrates to spawn on.  Many breeders seem to like gray slate tiles; I’m doing fine with white ceramic tiles, presenting the rough side to the fish for spawning (I have had a pair go behind the tile and spawn on the smooth side..it still worked, to my surprise).

The reason to use the tile or slate is that you can remove it very quickly once you discover a spawn; this reduces in-tank contamination and short circuits egg eating. Most breeders seem to suggest pulling the eggs simply as soon as you can, citing diminishing success rates the longer you leave them with the parents. I cannot say I’ve observed this level of time sensitivity.

When you pull the nest from the parents, you can instantly replace the tile with another one.  They still seem puzzled by the sudden disappearance of the eggs, but I think leaving them without the tile for several days might cause problems with them using it for subsequent spawns. If you can’t get your angelfish to spawn where you want them to, no worries. I’ve developed a protocol for dealing with that which is simple and effective; I’ll cover that in my next installment.

Part 2 – Incubation Vessels I have settled on a large (half-gallon) specimen cup as an easily obtainable and reasonably reliable vessel for incubation of the eggs on the tile. It is large enough that no matter where the eggs are laid on the tile, I can keep them all submerged, even if I have to get a little creative with the orientation of the tile in the container.  The main reason I like the specimen cup is that I can hang it in the broodstock tank, which then functions as a water bath and keeps the temperature constant for the eggs.

I prep the specimen cups often by giving them a quick wipe down with hydrogen peroxide followed by a good rinse in tap water. I should also mention that, along with the container, you need a good air-feed with an air stone for circulation.

Part 3 – RODI Water This part is critical in my opinion. Every time I have tried artificial incubations with my tapwater I have run into problems. While I maintain a highly productive RO/DI unit in my fishroom for my marine aquariums, you can easily purchase RO water at the grocery store one gallon at a time. Realistically, just one gallon per incubation is probably what you need. 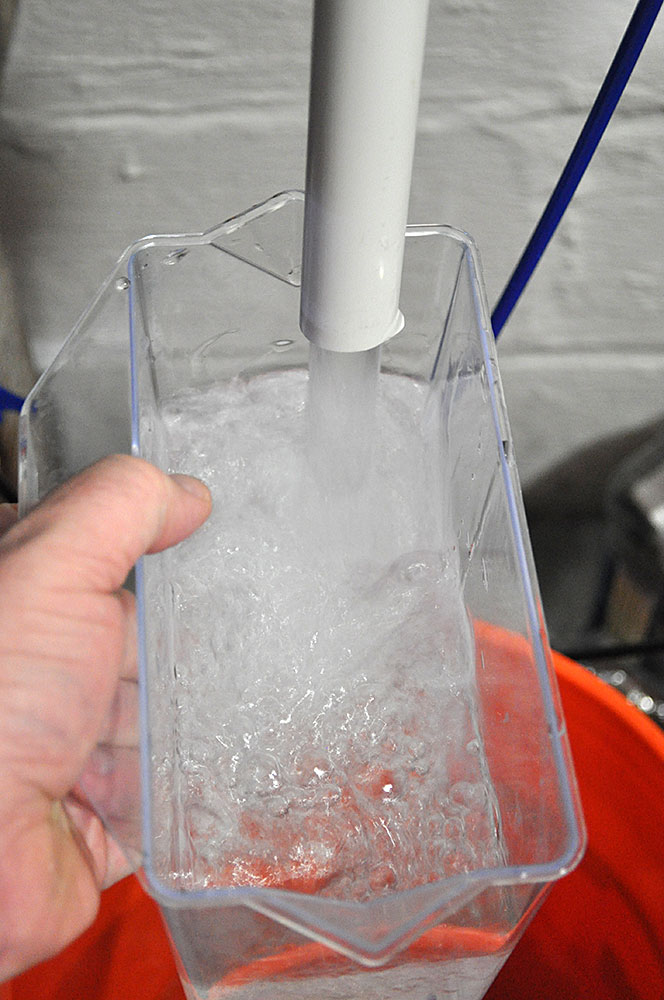 My RO/DI storage is heated, so I have no issues simply taking water and using it immediately. After cleaning my specimen cup, I fill it with RO/DI water and place it in any one of my broodstock aquariums for incubation. 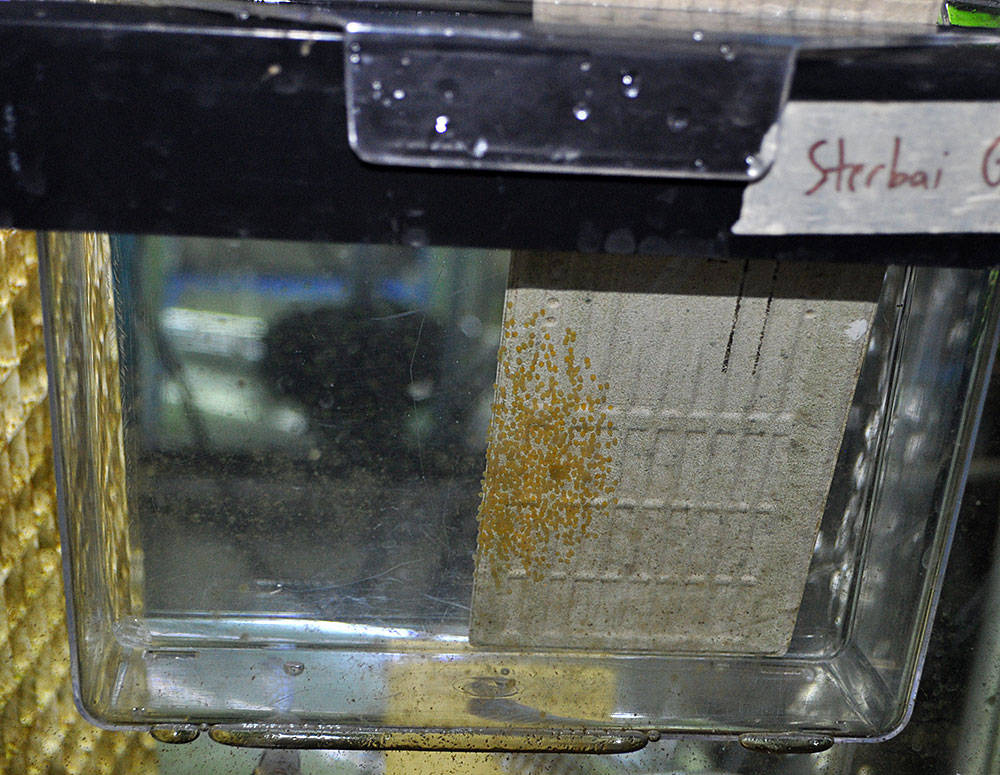 Moving the eggs couldn’t be simpler – just pick up the tile and put it into the prepared specimen cup.

This is beyond simple.  Pick up the tile, and place it in the now-filled specimen cup.  You do not need to worry about briefly  exposing the eggs to air (case in point, this clutch was the clutch I used for my egg counting demostration).  Once in the container, I adjust the air flow to be pretty brisk – not enough to blast the eggs off the tile, but simply enough to keep the water circulating well. 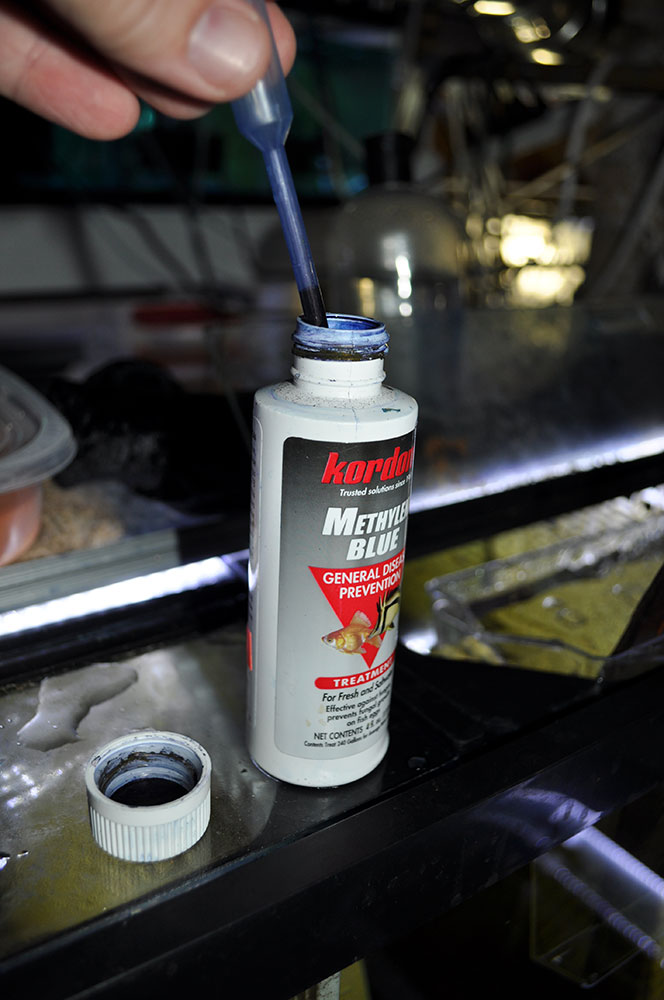 Dosing methylene blue is said to perform a number of beneficial functions in artificial incubation.

Many different anti-fungal / anti-bacterial additives have been proposed for the artificial rearing of angelfish, including Acryflavin, Hydrogen Peroxide, and Methylene Blue.  I like Methylene Blue because I’ve had zero problems with it, it is easily accessible, and it seems to “do the trick”.  Once the eggs are set up in the incubator, I dose methylene blue at a rate of 10 drops per gallon (so the large specimen cup gets 5 drops; if I’m forced to use a small specimen cup which is roughly a quarter gallon, I use 2 drops). Part 6 – Label The Batch 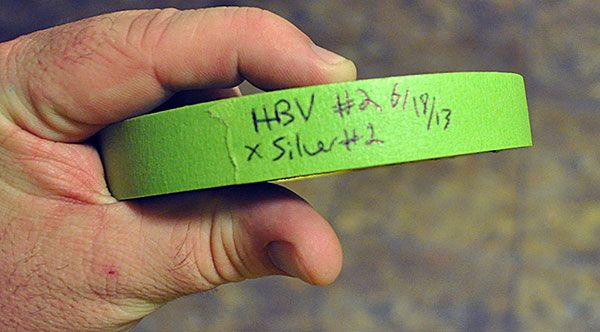 My fishroom is covered in masking tape and sticky notes.

I label the batch with parental information and spawn date. Simply writing on masking tape, and affixing it to the specimen cup’s hanger, does the trick. Part 7 – Now You Wait 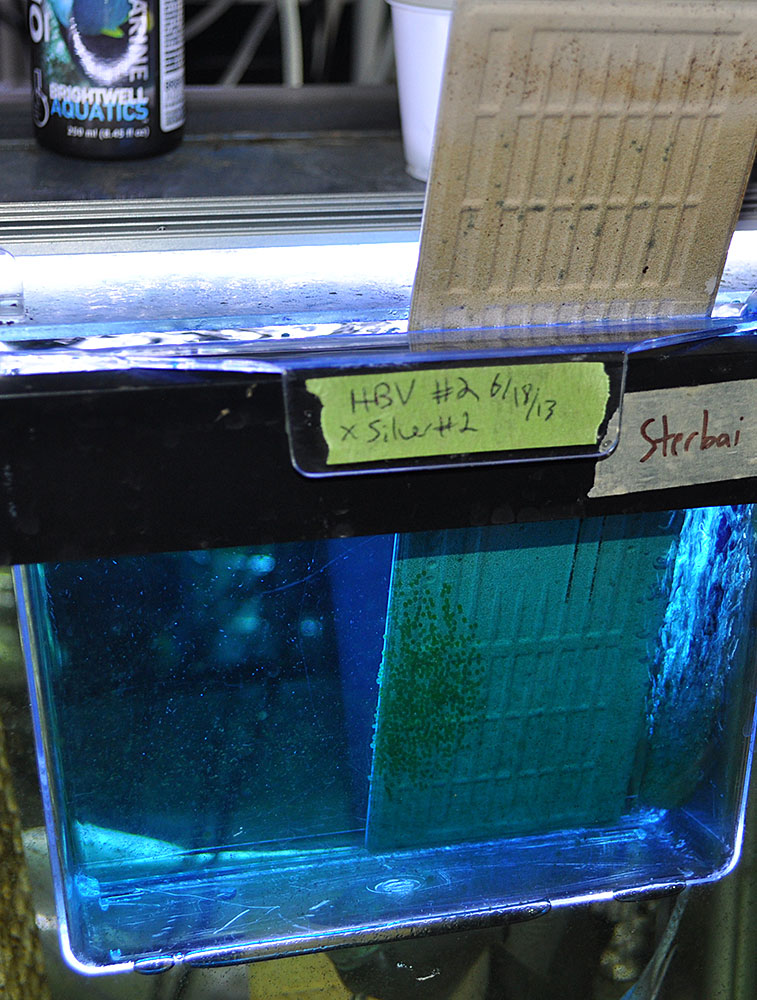 Artificial Incubation is all set and ready to go!

Read on to Part 2 to see how it all turned out!