“On September 23rd, 2013 we observed another spawning event on our coral greenhouse.

“At approximately 7:45 pm nearly all fragments of our Blue Voodoo (Acropora sp.) spawned. These corals are split up into multiple tanks and isolated systems, yet their spawn was still synchronized.”

Earlier in 2013, ORA shared another coral spawning event in their culture greenhouses; this video uploaded January 22nd, 2013 (update: this was a spawning event recorded in 2010).

Congratulations to ORA on what can only be called clear evidence that they must be doing something very right! 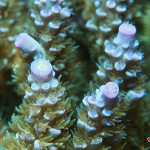 Thanks to Dustin Dorton for sharing these videos. Dustin will be interviewed by Matt Pedersen about these events in the November/December Issue of CORAL.

Editor: This extraordinary event flies in the face of conventional wisdom that only mature colonies of stony corals will spawn. It is still uknown if the gametes will prove fertile.

The next issue of CORAL (November/December 2013) will feature a cover story on sexual reproduction in corals, with a report from J. Charles Delbeek and Jamie Cragg on this year’s coral spawning in Guam.