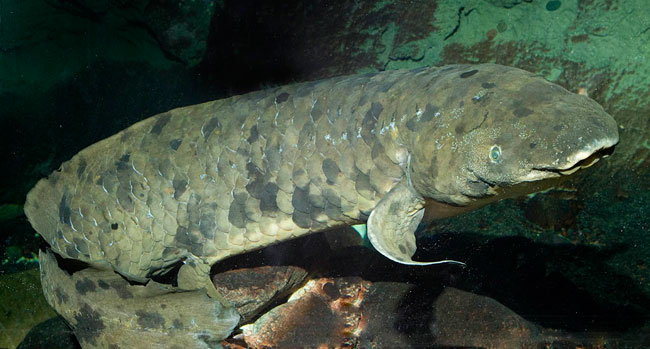 “You can’t kill them,” says one aquarist who keeps lungfishes, and, indeed, the world’s oldest-living aquarium fish recently was toasted for having delighted visitors to Chicago’s Shedd Aquarium for the last 80 years. 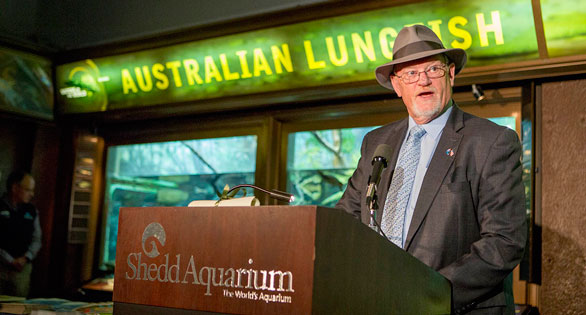 Australian Consul-General The Honorable Roger Price kept his hat on but saluted Granddad’s many years under the care of Shedd’s aquarists. © Shedd Aquarium/Brenna Hernandez

Affectionately known as “Granddad,” this curiously fossil-like creature is an Australian Lungfish, Neoceratodus forsteri. His keepers at Shedd say they have no idea how old this venerable fish was when he arrived, and members of his species are reported to have lived a full century, reaching 1.5 meters in length and more than 40 kg (5 feet long and almost 90 pounds in weight).

Slow moving and generally sedentary, the Australian Lungfish can breath air and survive for days out of water if kept moist. (African lungfishes are even tougher, being able to endure months of dessication in a cocoon buried in dried mud.) 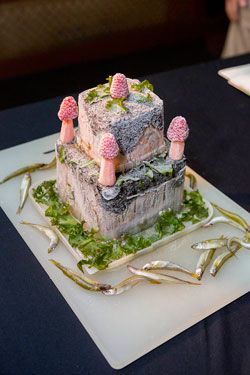 With obvious physical similarities, lungfishes are related to the ancient-looking coelacanths, also often described as living fossils. Both are classified as sacopterygians, or lobe-finned fishes.

Granddad’s comments are unavailable, but in the wild lungfish are primarily carnivores, feeding on small fishes, tadpoles, frogs, worms, snails, and shrimp, along with some plant material.

Australian Lungfish are typically found in quiet pools in slow-moving waters in southeastern Queensland. Although not considered endangered, they are a protected species and may not be caught without a special permit.

Jindalee International Pty Limited, in Brisbane, doing business as Ceratodus.com, is CITES-approved and licensed to breed, sell and export lungfish from Australia.

“Australian Lungfish make ideal aquarium fish,” according to company literature. “They are very hardy, almost indestructible and can have a lifespan of 100 years. (You may like to make some provision for them in your will). These fish are easy to care for and undemanding regarding tank conditions and feeding. They are non-aggressive and can be handled and hand-fed.”

To qualify for CITES approval, each fish must be DNA tested and tagged with an implanted microchip.  Exports must be approved by the Australian Department of Environment and Heritage.