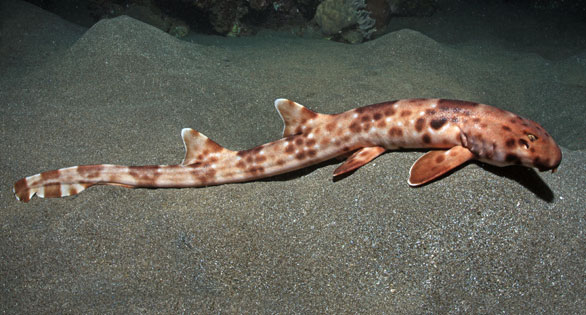 Jakarta, Indonesia – A highly charismatic species of walking shark has been discovered in the remote eastern Indonesian island of Halmahera. The epaulette (long tailed carpet) shark, Hemiscyllium halmahera, uses its fins to “walk” across the ocean floor in search of small fish and crustaceans. The discovery comes at a time when Indonesia is significantly ramping up its efforts to protect shark and ray species that are now considered vulnerable to extinction, including whale sharks and manta rays.

Indonesia is the world’s largest archipelagic nation with a marine area of over 5.8 million km2 (including a 2.55 million km2 EEZ), and harbors a vast wealth of marine resources. Among these is an amazing diversity of marine life; besides hosting well over 75% of the world’s coral species, Indonesia also is home to at least 218 species of sharks and rays.

“This is the third walking shark species to be described from eastern Indonesia in the past six years, which highlights our tremendous shark and ray biodiversity,” said Fahmi, a shark expert at the Indonesian Institute of Sciences. “We now know that six of the nine known walking shark species occur in Indonesian waters, and these animals are diver favorites with excellent potential to help grow our marine tourism industry.”

The shark was described in a recent paper in the Journal aqua, authored by Dr. Gerald R. Allen of Conservation International and colleagues Mark Erdmann and Christine Dudgeon. They report that the species reaches a maximum length of just 70 cm (28 cm). Bamboo sharks are among the few elasmobranchs suited to keeping in home aquariums because of their relative small size and bottom dwelling behaviors. 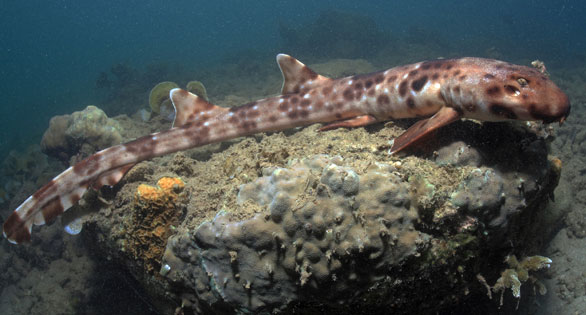 The new bamboo shark perching on a rock in a remote area of Indonesia in the heart of the Coral Triangle. The bamboo sharks have the curious ability to “walk” along the bottom on their pectoral and pelvic fins. Image: Mark Erdmann/Conservation International

Mark Erdmann CI’s senior advisor to the Indonesian Marine Program and regional coordinator for the Bird’s Head Seascape Program said, “After nearly three decades as the world’s largest exporter of dried shark fins and other shark and ray products, Indonesia is now focusing on the tremendous economic potential of its sharks and rays as living assets. In the last six months’ alone, two of the country’s top marine tourism destinations, Raja Ampat and West Manggarai (home of the famed Komodo National Park) have declared their waters as fully protected shark and ray sanctuaries. It is great to see our findings supporting the valuation and conservation of this natural capital for the long-term wellbeing of the nation.” 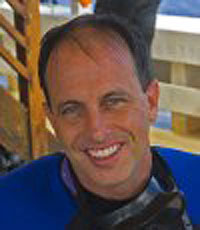 “This tremendous biodiversity of sharks and rays is a natural heritage that must be conserved for future generations,” said Dr. Sudirman Saad, the Director General of Coasts and Small Islands at the Indonesian Ministry of Marine Affairs and Fisheries, who confirmed the government’s commitment to manage these important marine assets in a sustainable manner.

He noted that the Ministry is currently developing regulations and management plans to ensure the conservation and viability of key threatened species of sharks and rays in Indonesian waters. “In addition to securing the long-term sustainability of our national fisheries, we have launched this initiative to prove Indonesia’s commitment to protect our marine biodiversity and ensure the long-term sustainable use of sharks and rays well into the future,” said Saad.