Among the most engaging and prized of cichlids available to aquarists, the genus Tropheus currently includes eight species, some of them undescribed—but with countless local variants and color morphs—from the huge Lake Tanganyika in East Africa. 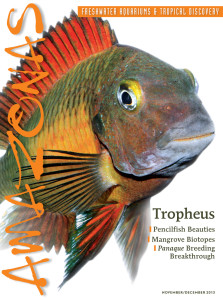 Look to the next issue of AMAZONAS for a definitive look at Tropheus cichlids in the wild and in the aquarium, with expert coverage of their natural history, their controversial taxonomy, care, feeding, and captive breeding. With dozens of glorious new images, this section includes contributions by Hans-Georg Evers, Ad Konings, Mathias Eberhardt, and Norbert Knaak.

• Pencilfishes: For the aquarist seeking fish that will form shoals, exhibit vibrant colors, and have accommodating aquarium personalities and husbandry requirements, the genus Nannostomus offers many interesting choices. Marc Puigcerver and Àngel Cánovas survey the most desirable and unusual of the pencilfishes, including several that make excellent nano-aquarium candidates.

• Mangrove Biotope: American planted tank wizard Devin Biggs, whose specialty is the design of creative ripariums—systems that provide wet shoreline habitats that play host to marginal plants, as well as the fishes and invertebrates living in the water below. In the next issue of AMAZONAS, he explores the creation of mangrove habitats with authentic brackish water vegetation and livestock.

• Hans-Georg Evers provides details on his breeding of the spectacular Rainbow Belly Pipefish, Microphis deocata • Rachel O’Leary visits the fishroom of “cichlidiot” Spencer Jack in Winnipeg, Canada • Jens Kühne and Michael Taxacher take the reader on a collecting trip to South Thailand in search of rare new freshwater gobies • And much more…..