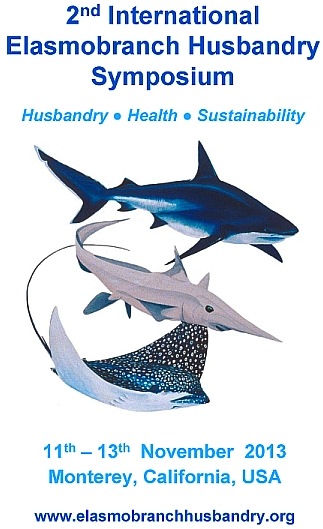 The 2nd International Elasmobranch Husbandry Symposium is slated to be held November 11-13, 2013 at the Monterey Bay Aquarium and the Plaza Hotel.

The first symposium was held some 12 years ago, October 2001, in Orlando, FL. No doubt a lot has changed since then. One look at the Elasmobranch Husbandry Symposium’s program for 2013 or the presentation abstracts (pdf downloads) is all it takes to realize that this conference is the must-attend event of the year for anyone involved in shark care and shark propagation, especially because it might be another decade before the next gathering of elasmobranch experts and aquarists!

The 1st Elasmobranch Hysbandry Symposium yielded a highly detailed Elasmobranch Husbandry Plan of Action, highlighting four main objectives for the “elasmobranch caretaker community”. These targets are summarized here as 1) Helping threatened shark species, 2) Improving captive husbandry of sharks, 3) Expanding public aquarium research, and 4) Establishing a role for public aquariums in elasmobranch conservation. Even more interesting are the areas of focus that will help reach these goals: Legislation, permitting and collection; Husbandry; Veterinary care; Captive breeding; Re-introductions; Research; and
Education, outreach and advocacy.  Of greatest importance is the transparency and free exchange of information that this effort has created; you don’t need to work at a public aquarium to download the Elasmobranch Husbandry Manual.

For the three days of 2013’s symposium, three main themes are planned.  Unlike most aquarium hobby conferences, where talks are given for an hour, the bulk of presentations planned are slated for only 15 minute session. This format allows for much more diverse offerings; if a particular topic is of no interest to you, just wait 15 minutes for the next one!

Day 2, November 12th, the first 3 of 4 sessions are devoted to health. Useful topics like “Elasmobranch quarantine” and “Elasmobranch mineral and vitamin requirements” go a long way towards heading off disease issues. “Emerging diseases of aquarium elasmobranchs” and “A survey of voltage in aquaria housing elasmobranchs” seem to go beyond the fundamentals, keeping attendees up to date with current information.

The elasomobranch husbandry theme continues through the final day, Wednesday, November 13th, with an emphasis on the role of public aquariums connecting the public with the sea. Kicking off the presentations is “What and how do we tell the public about the global plight of sharks and rays?”, followed up by two offerings on captive Manta Ray (Manta sp.) care! The bulk of the presentations include topics like “Elasmobranch touch pools: best practices” and “Pushing the frontiers of elasmobranch capture, transport and husbandry”, as well as numerous species-specific husbandry presentations.

If you have the ability to attend, you probably should! This might is a very rare chance to meet aquarists from all over the world who specialize in the captive care and breeding of sharks and rays; the program roster alone with dozens of presentations and topics of interest for the elasmobranch enthusiast. Even if you’ll never have a Manta Ray in your basement pond, there’s still plenty to learn (and dream). Register online for the Elasmobranch Husbandry Symposium by August 20th to get the early-bird rates.