Some Of The Weirdest Critters

All right, I admit it.  I am a fan of weird and bizarre animals.  And, by definition, since nothing truly bizarre can have a backbone, that means I am fond of weird invertebrates.  And by doggies, have I got one for you!

I have been working diligently on my next article for CORAL and it is coming along nicely.  And, of course, that sounds a lot like “So far, so good!”, a phrase heard 29 times, once as he passed each floor, by a fellow who jumped off a 30 story building.  Actually, I do think it is going well.  Nonetheless, I felt the need for a mental break yesterday and started to do some surfing looking for odd critters.

And, boy, oh boy…  While doing a dance with Ms. Google, I came across a rather enigmatic headline, “Polypodium hydriforme, (Coelenterata) in Paddlefish from the Upper Missouri River Drainage.”

Several things about this sentence started the chimes going at full volume for me.  First, paddlefish are strange fish.  Related to sturgeon, they look rather like sawfish, but unlike sawfish, they live in freshwater.  Prior to when the Missouri River was turned into a series of interconnected lakes, paddlefish ranged in the Yellowstone River, probably up to Livingston, Montana, about 30 miles south of where I live.  Now, paddlefish are vanishingly rare and becoming rarer by the hour.  All species go extinct, but the time when the Missouri River populations of Paddlefish exit the stage appears to be approaching much more rapidly than might have been thought the case even a few decades ago.  Which I think is really too bad, as I think they are neat fish.  Second, the first three words of the sentence, “Polypodium hydriforme (Coelenterata), really woke me up.  Polypodium hydriforme is obviously a species name.  But, I didn’t have a clue about what it really was.  No biggie, there.  Most things in fresh water, even around here where I was sorta raised, are not species I am familiar with.  However, the word “Coelenterata” in parentheses following the species name fired the pot to a rapid boil, as it means that P. hydriforme is in the Coelenterata.  Or at least the authors of the article thought so.  Well, no.  Nothing is in the Coelenterata; the term is obsolete, at least it is in the English speaking zoological world.  It was the name given for a supposed group consisting of the fusion of the Cnidaria and Ctenophora.  Since those two groups are not related, at all, and since the fact that they are not related was determined before the turn of the 20th Century, the use of “Coelenterata” means that 1) the authors are clearly not invertebrate zoologists, and 2) they more than likely mean to use Cnidaria, as no ctenophore has ever lived in fresh water.

I leaned back in my chair and took a drink of coffee, hoping the caffeine soup would shake any cobwebs out.  In Paddlefish…  It seemed to me the only thing that made sense would be that P. hydriforme is inside Paddlefish.  Now, parasitic cnidarians are rare.  That life style is not unheard of in the phylum, I know of a couple of examples of marine species that are parasites, but it is uncommon; one parasitic interaction involves a sea anemone whose larvae eat the gonads of a specific species of jellyfish is illustrated below. 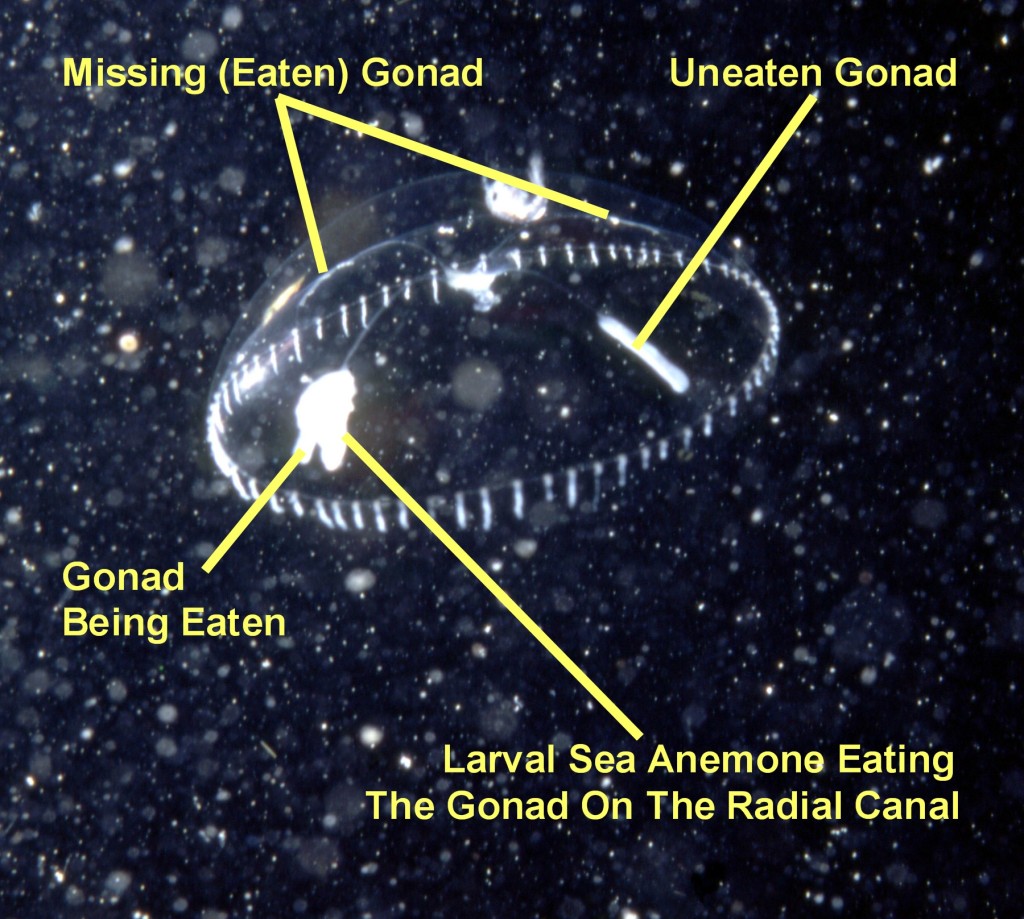 Larval sea anemone (Peachia quiquecapitata) eating the gonads from the radial canals of the jellyfish (Clytia gregaria).  The anemone larva has eaten two and one half of the four gonads.  Most authorities consider this interaction  parasitism,  others say it is predation.

There is, however, one economically very important and decidedly strange, exceptionally odd and highly derived group of about 1200 species that was batted around from phylum to phylum for about a century before it ended up in the Cnidaria about 15 years ago.  The organisms in this group, the Myxozoa, didn’t really seem to belong anywhere.  A typical myxozoan genus was Myxobolus.  As with many parasites, there are several different life history stages; however, the spore stage in Myxobolus was characterized by have a shell or “test” consisting of several cells joined together with intercellular junctions, a characteristic of multicellular animals, not protists or protozoans.  Inside the test was a syncytial mass, basically a mass of protoplasm with several nuclei, but no cell membranes, and… wait for it… two so-called “polar capsules.”

These polar capsules were secreted by the cells that contained them, and each consisted of a capsule with an involuted, spirally-coiled, thread that explosively extends to attach to the hosts’ tissues.  This sounds suspiciously like the description of a nematocyst.  But, obviously it couldn’t be a nematocyst, because only cnidarians had nematocysts, and these creatures were obviously not cnidarians.  Or, put another way, they weren’t cnidarians until the techniques became available and some researchers looked at their genetic materials, and compared it to the genetic material in Hydrozoans, and, “Kazango, Presto, Chango”.  They went from being Myxozoan protozoans to being highly modified Hydrozoans, in the phylum Cnidaria.  That had to be one of the most rapid evolutionary advances known, from a protozoan to a cnidarian, all in the time it took to publish some research findings!  In other words, the Myxozoa are actually some really funky tremendously highly modified hydroids.  And, the polar capsules could actually be seen to be rather typical nematocysts known as atrichous isorhizas.

Okay, so there are some strange cnidarians that are parasites that don’t look at all like cnidarians.  But, what about Polypodium?

The species Polypodium hydriforme was described 1885 as parasite of sturgeons.  This, by itself is unremarkable, and the parasite had been found in some other fish, it would likely be unnoticed or of little consequence.  However, this parasite lives inside the oocytes, or developing eggs of sturgeon; Black Sea sturgeon.  In other words, it eats caviar, before the sturgeon can deposit the caviar outside its body.  Given that caviar is legendary for its value, any parasite that gets to it first has to be of some importance.

Polypodium hydriforme is unusual in a number of regards.  First, it lives within the cells of its host.  That is not unusual for a protozoan or protistan parasite, such as malaria; however, it is almost unheard of for a animal parasite.  Normally animal parasites, for example, flukes,  live in the tissues or the blood of the host, not within the cells.  For most of its life span in the host, which may be several years, P. hydrifome individuals are essentially inside out, with the gastrodermis located as an outer layer presumably digesting host oocyte materials.

Some parts of the life cycle of this organism are fairly well known, but there are some interesting gaps.  How the animal gets into its host’s eggs is not clearly known.  However, once into the oocytes, “Polypodium develops from a binucleate cell into an inside-out planuliform larva and then into an elongate inside-out stolon; the epidermal cell layer is located internal to the body and the gastrodermis is located externally.  The embryo, larva and stolon are surrounded by a protective polyploid cell, which also functions in digestion.  Just prior to host spawning, Polypodium everts to the normal position of cell layers, revealing tentacles scattered along the stolon. During eversion, the yolk of the host oocyte fills the gastral cavities of the parasite, supplying the future free-living stage with nutrients.  Finally, upon emerging from the host egg in fresh water, the free living stolon (Figure 1A) fragments into individual medusoid-like forms (Figure 1B) that go on to multiply by means of longitudinal fission, form sexual organs, and ultimately infect host fish with their gametophores.”  Quoted from Evans, N. A. et al. 2008.  Quotation and image use allowed under a Creative Commons Attribution License. 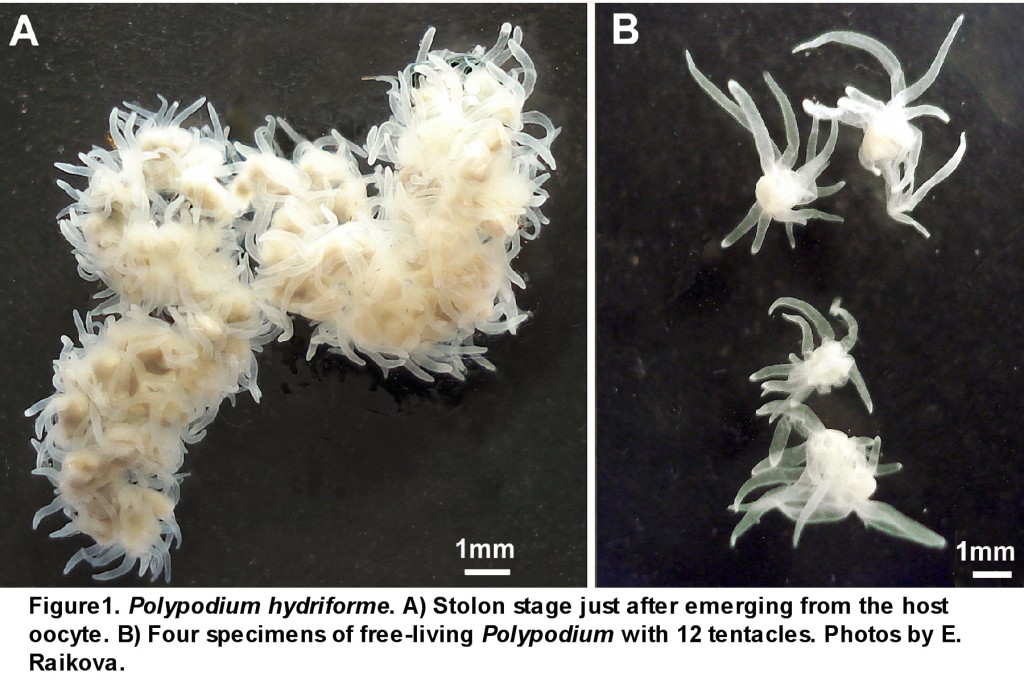 This animal is a hydrozoan or hydroid that spends a long portion of its life as an inside-out parasite living inside the oocytes or developing egg masses of sturgeon, or paddlefishes digesting the developing eggs.  Then when its host spawns, the parasite turns itself inside out again, thus becoming a normally oriented hydrozoan, which apparently takes up an external lifestyle.  At some time in the future, they develop gonads, spawn, and their larvae infect a new generation of fishes.

I think this one is bizarre enough for me, today.  I hope you enjoyed this tale of strangeness amongst the caviar-eating hydroid parasites.

© 2008 Evans et al; licensee BioMed Central Ltd.  This is an Open Access article distributed under the terms of the Creative Commons Attribution License (http://creativecommons.org/licenses/by/2.0), which permits unrestricted use, distribution, and reproduction in any medium, provided the original work is properly cited.

Raikova, E. V. 1994. Life cycle, cytology, and morphology of Polypodium hydriforme, a coelenterate parasite of the eggs of Ascipeniform fishes.  Journal of Parasitology. 80:1-22.