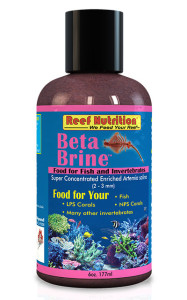 Other foods in this line include R.O.E. Real Oceanic Eggs™, Arcti-Pods®, and Mysis-Feast®, as well as herbivorous offerings Macro-Feast® and Fuzzy-Phytes®.

For more information on this new feed, including analysis and use, visit http://reefnutrition.com/beta_brine.php