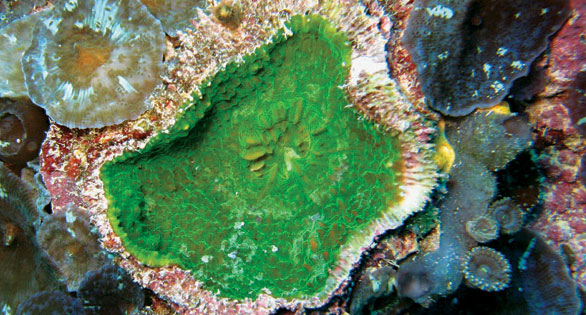 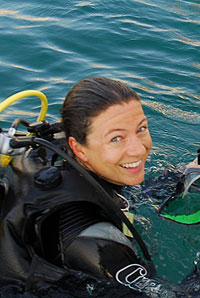 Difficult to identify but often dazzlingly beautiful, Chalice corals are much-appreciate by many reef aquarists. Now a new species of this small genus of shallow-water Indo-Pacific stony corals has just been added to the roster of eight previously known Echinophyllia species. The new coral is described in a paper by Francesca Benzoni from the University of Milano-Bicocca, Italy, and published in the journal ZooKeys on July 24, 2013.

Known as Echinophyllia tarae, the coral is reported to resemble E. echinata, well-known in the aquarium trade, as well as E. nishihirai, in living specimens. Skeletal analysis, however, reveals that the new species has a distinctive central corallite, as seen in the image above (right of center).

The author, says that many specimens were observed in the remote Gambier Archipelago apparently recovering from “partial death” caused by temporary burial in sediments. The green colony above, she says in the paper, shows “a concave colony with a large central corallite showing a peripheral rim of skeleton encrusted by pink coralline algae and surrounded by zoanthids and corallimorpharians at Mangareva Island. Echinophyllia tarae sp. n. is most commonly found at sheltered sites characterized by calm water conditions and muddy sediment which could be stirred up and deposit on benthic organisms suffocating them (Erftemeijer etal. 2012).” 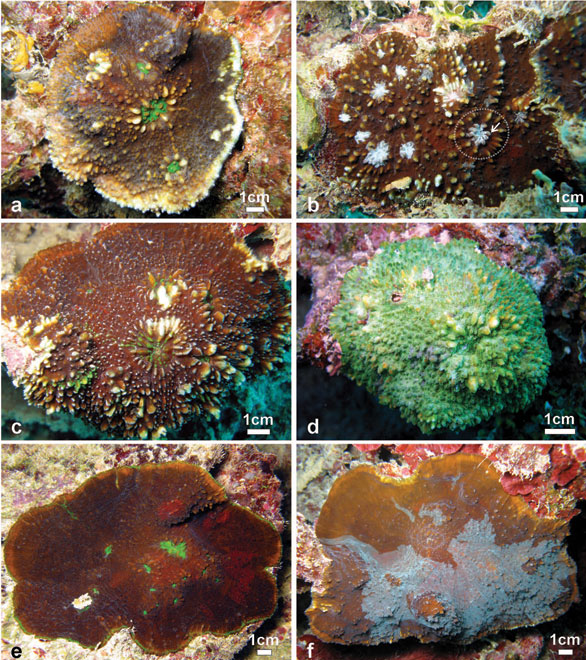 Says the author: “The species is characterized by a high intraspecific variation of several morphologicaltraits. It also shows typical features that distinguish it from the other Echinophyllia species and from Echinomorpha nishihirai, such as the dimensions and the protrusion of the largest corallite (centrally located in flat colonies), the thickness of the septa, and the development of the crown of paliform lobes. Although the new species is common in the Gambier Islands, its occurrence elsewhere is unknown. The sampling of coral tissue from the type specimens of E. tarae sp. n. will allow molecular analyses in order to examine its phylogenetic relationships with its congeners and other species in the Lobophylliidae.”

The new species was discovered during the 2011 Tara Oceans Scientific Expedition with MV Tara, the first new study of cnidarians in the Gambier Islands since the mid-1970s.