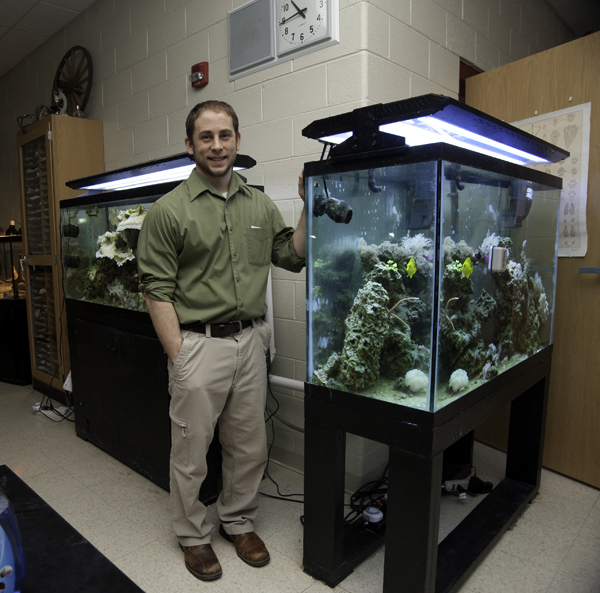 Seventh Grade Biology Teacher Dwayne Kalinay stands between two of the reef tanks in his classroom.

The Reef Conservation Society’s Tanks for Schools program was featured in the July/August 2013 issue of CORAL Magazine. This program was started at Williamsport High School under the leadership of Lawrence Flint, a Physics and Chemistry teacher at Williamsport as well as the Vice President of Education for the Reef Conservation Society. In a prior installment, we visited the Walnut Street Christian School in Avis, PA.

Another teacher who involved in the Tanks in Schools program is Dwayne Kalinay. Kalinay teaches 124 seventh graders at Lake Lehman Jr. Sr. High School outside of Lehman, PA. His classroom resembles a small zoo. Aside from maintaining three reef tanks the class also raises and breeds African Cichlids, as well as keeping Snapping Turtles, Red Slider turtles, Anoles, Bearded Dragons, and millipedes in a host of tanks throughout the room.

As a second year teacher working in another district, Kalinay started his own classroom tank. He quickly realized how expensive it was. “I must have spent my first year salary on things for the class room. But it really helps to have things like this,” He gestures around the classroom, “to keep the kids interested.” When Kalinay started working at Lake Lehman he found out about RCS and the Tanks in School program.

The reefs in his classroom took off from there because of the additional knowledge and support available from the club. Every year since then Kalinay has added a new tank. “We started with the 90 gallon and then plumbed that together with the 110. Last summer we added the 65-gallon.” Both Kalinay and Larry are proud of the 65 because it has zero impact on the wild reefs and was set up like the tank at Walnut St; mined rock seeded in the Williamsport systems, fragged coral and a pair of tank raised clown fish. 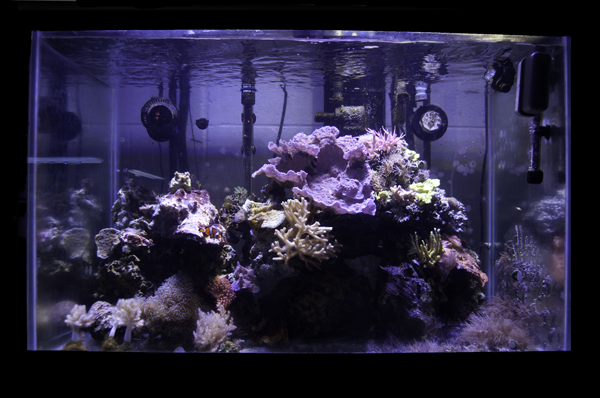 The tanks at Lehman are very popular with the students and are used not just by Kalinay’s biology classes but also by other science, art, and life skills classes. Because of the tanks and his class being extremely interactive Kalinay’s room is often used for student and parent orientations. It has also become a popular stop on most school visits.

Like the reef tanks in other schools supported by the club, Kalinay’s aquariums are an excellent teaching resource. A reef tank can be used to teach many science concepts such as interaction, relationships, biotic and abiotic factors, parasitism, symbiosis, and adaptation. Students discuss and learn about why reef creatures are often more brightly colored than freshwater fishes and invertebrates. “Not all these elements are part of what needs to be taught in seventh grade science. But,” Kalinay says, “they can be taught and help the students to better understand how the ecosystem in a reef tank functions.” 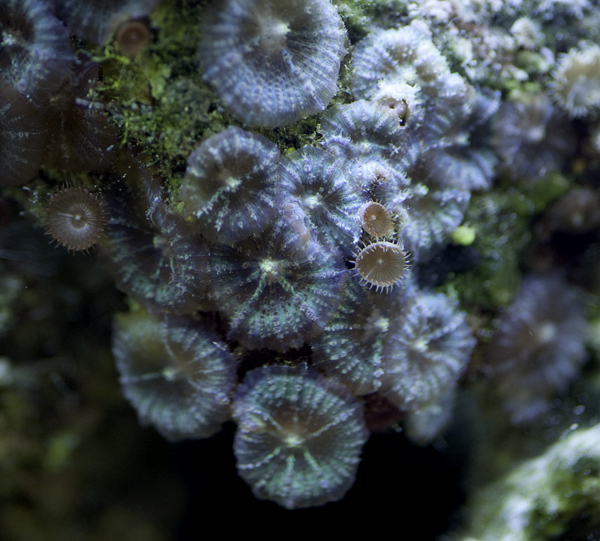 A colony of mushrooms in the classroom reef tanks at Lake Lehman Jr./Sr. High School.

Being able to teach students a skill through a hands on experience is often more engaging then a worksheet or an exercise that appears to exist ‘just because’. Kalinay explains it this way. “ As a kid what would you rather do measure a line in the hallway or measure a glass box with star fish and clown fish swimming along the side? With a tank I can have the students measure it and then calculate volume. It’s a real world application and the more hands on stuff you can do the more it mixes things up for them and keeps them interested in learning.You have to remember that 7th graders are 12 years old.”

Like Larry Flint, Kalinay is also hands on. The LEDs over the 65-gallon tank were put together by students in his class. “It is just another example of real-world learning; they are 12 and 13 years old and they have built a lighting fixture. With the tanks we can talk about all kinds of stuff and they now have a place to draw experience from. It’s practical learning, not just picking from choices A-E. “

By taking care of the reef tanks the students also learn to appreciate wild reefs. They see how small things have big impacts. Kalinay says that he is surprised how invested kids become in the tank.

“When something goes wrong they react to it. One year I had a fish die and there were kids who cried about it. They had watched it and fed it all year and it upset them. Sometimes you have pieces of coral that start to lighten up and bleach. They get upset. It shows that they care about whats happening in the tank and that they know what bleaching is. That is something they can read about in a newspaper article and now they understand from experience. It’s tremendous that they know about it is because they learned it here with the tanks. We try to figure out what happened and they see how a small change in something like alkalinity or pH affects the whole system.”

Kalinay’s honors students learn how to frag coral using bone cutters to cut pieces from a larger colony. They then super glue each frag onto rubble rock or ceramic plugs. Students will grow the frags out in a 40 gallon tank located in the supply closet. They measure growth to practice their metrics skills and use iPads to take photos and document the changes from week to week. Careers in science are also touched upon by studying the classroom reefs. Kalinay has the kids read an article about coral farming and restoration in Florida, and then ties it in with what they are doing in the frag tank. 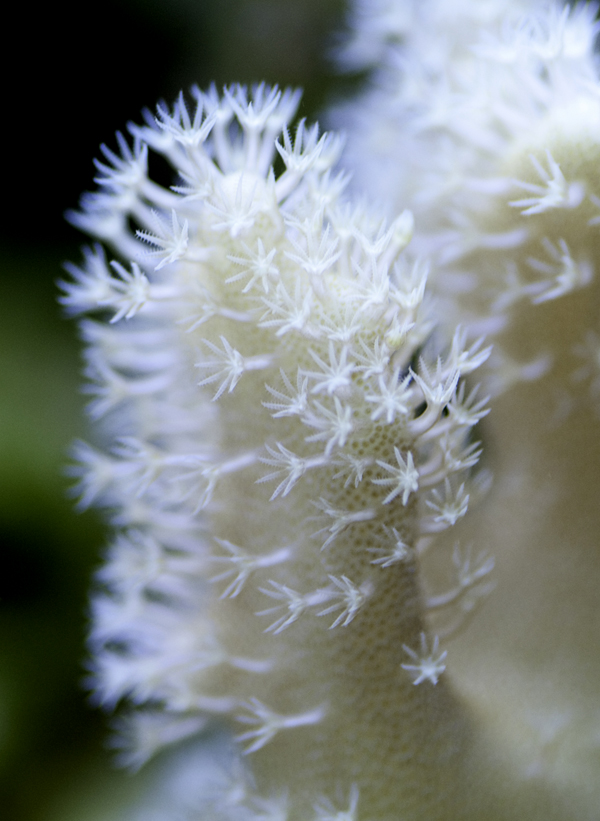 A close up of leather coral growing in the tanks at Lake Lehman Jr. Sr. High School.

“They learn about conservation and sustainability by fragging the coral that we have here. We know from reading about the coral farming and restoration that we can rebuild a reef. By exposing students to a captive reef, something that they really don’t get to see here in Pennsylvania, they learn to value wild ones. If they value it they are more likely realize that we should try and preserve them.”

By fragging coral and selling it to local hobbyists and pet shops, Kalinay is also able to show his students that keeping a reef can be sustainable. Money from sales of coral goes back into the class room systems. Raising the frags becomes more than just a teaching tool showing how an organism propagates asexually, or how to measure its growth. Students gain the realization that what they are doing helps maintain their own classroom reef . Kalinay states, “The kids see that what we do is important to our own reef. We take the frags we make here and we sell them. The money goes back into our tanks to keep them supplied. I have used the money for things like more coral cutters in the past and now I am saving to upgrade the 90 and the 110 with LED lighting. On the other side of it the people who buy the coral get a piece that didn’t come out of the oceans. “ 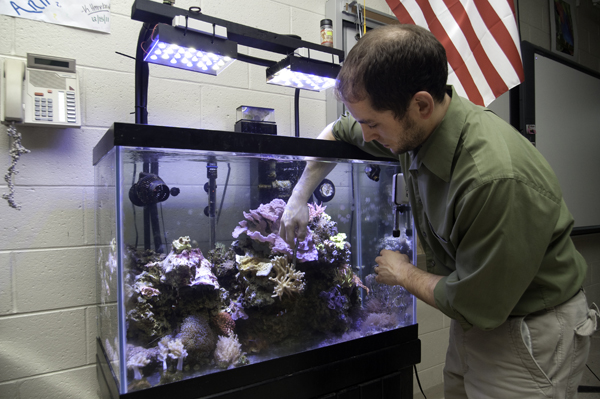 Teacher Dwayne Kalinay reaches into the 65 gallon mini reef in his classroom.

When asked how much the kids help with the tanks outside of class, Kalinay says that there are four or five past students that take time out of their lunch or study halls to come down and help out. “Aside from the initial set-ups or moving around rock I don’t really touch the tanks anymore. The students do everything; testing, dosing, feeding and cleaning the glass. After three years we have it down to an exact science. I don’t have to come in and check after the weekend to make sure everything is still alive. It’s a good feeling”

Next year Kalinay plans on expanding his setup even further. “I am looking to add a 75-gallon tank. My plan is to have it viewable from all sides. Then I want to rearrange the tanks I have now. The 110 is going to be a predator tank so that the kids can see a different aspect of life on the reef.” 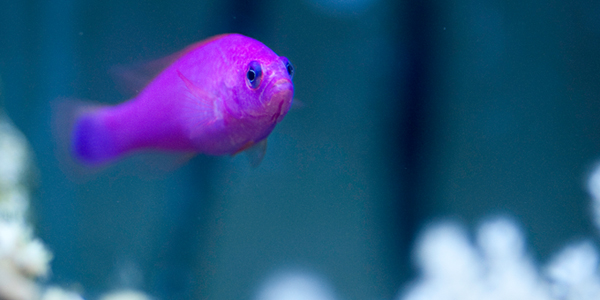 Having the club provide support is invaluable to Kalinay and other teachers involved in the program. In an era, where public education budgets have been decimated across Pennsylvania and the country, Kalinay is happy to point this out. “I know that I will be able to get the rock and the initial livestock for the next tank from Larry. The club really makes this sustainable. It’s not doable on this scale otherwise. The way that Larry has it set up is great. They have provided me with the past three years’ worth of supplies, coral, clownfish, rock, and frags. They donated the tanks. Each year I get money for supplies like food, dosing chemicals, etc. They give us salt from Reef Crystals and they have no restrictions about who I buy my supplies from. They are very trusting. I send them pictures every few months as a show of good faith that I am taking care of things. Larry comes down like once a year to see how things are. If I want help setting up a tank or have questions I know that he (Larry) is there.”

“If I want help setting up a tank or have questions I know that he is there. “ That statement sums up what Larry Flint and the club are doing. Landlocked in Pennsylvania, Flint and the Reef Conservation Society are working to save the wild reefs by being there, doing what they can; building awareness and appreciation one school tank at a time. 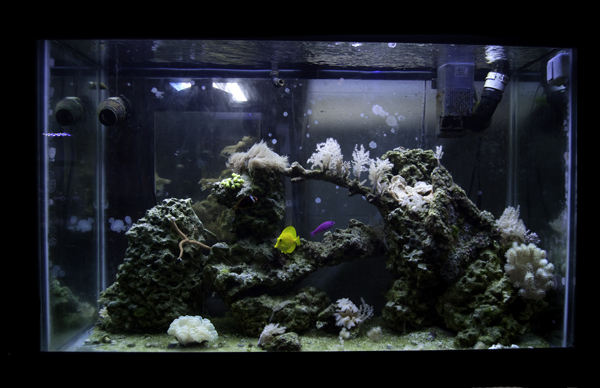 The Reef Conservation Society continually seeks to build relationships with new school sites and interested partners. You can view more about the club’s Tanks in Schools program at www.ReefConservationSociety.org .