The First Lightning Maroon Captive-Breds: What Am I Bid? 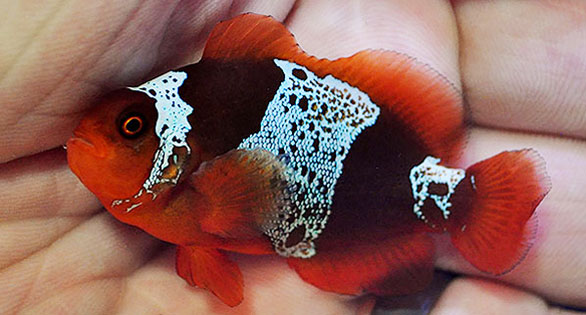 Three years after a strikingly pigmented aberrant morph of Premnas biculeatus was collected off Fisherman’s Island in Papua New Guinea (PNG) and quickly made headlines throughout the aquarium world, the first captive-bred Lightning-type offspring are about to reach the open market via an online auction.

Dubbed the PNG Lightning Maroon Clownfish, the prize catch was imported by Dave Palmer’s Pacific Aqua Farms in Los Angeles and placed with amateur breeder Matt Pedersen through its retail affiliate Blue Zoo Aquatics.  Pedersen was the MASNA Aquarist of the Year in 2009, in recognition of his breakthrough success in acclimating and breeding the Harlequin Filefish, Oxymonacanthus longirostris, an obligate corallivore. (Full disclosure, Pedersen is a CORAL Magazine senior editor.) 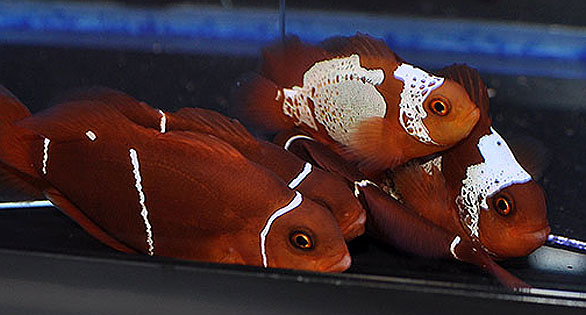 An online auction is set to begin sometime on the weekend beginning June 22nd of a limited number of young Lightning Maroons, as well as several full siblings that display white bars but none of the distinctive dappling of the original wild broodstock. Pedersen says that the first round of bidding will include “five F1 offspring: two with the “Lightning” pattern (and presumably Lightning genetics) and three non-Lightnings with more classic “White Stripe” patterning, the normal 3-stripe form, although one fish in particular has some additional spotting.  (Images of all fish are being posted on the Lightning Maroon blogsite.)

According to Blue Zoo Aquatics director Mark Martin, “These F1 PNG beauties are the only available PNG bloodline Maroon Clownfish left on the market AND they are the first Lightning patterned clownfish to hit the market since Mama Lightning was imported and sold to Matt almost three years ago. The auctions will be open to anybody with an eBay account in the US and the first shipments to the lucky winners will hit around the first week of July.”

Details of the auction can be found on the Blue Zoo site. Martin invites interested aquarists to sign up for newsletter updates. More details on the breeding of the fish can be found on Matt Pedersen’s blog, The Lightning Project.

“Since we don’t know how Lightning genetics work,” says Pedersen, “I cannot say whether the regularly patterned siblings carry an important Lightning genetic component (like a hidden recessive gene) or not.  It is my hunch, however, that the Lightning trait is either a dominant or partially dominant trait, although with the 50/50 split (Lightnings to “Classic Maroons”) in the first generation offspring, the possibility of a recessive trait is there.

Will more be coming? “If things go well with the initial five being auctioned by Blue Zoo, there are approximately 25 additional siblings that we’ll sell in this manner,” says Pedersen.

His Lightning broodstock are on hiatus right now, following the recent birth of Matt and Renee Pedersen’s second child, a daughter named Audrey. 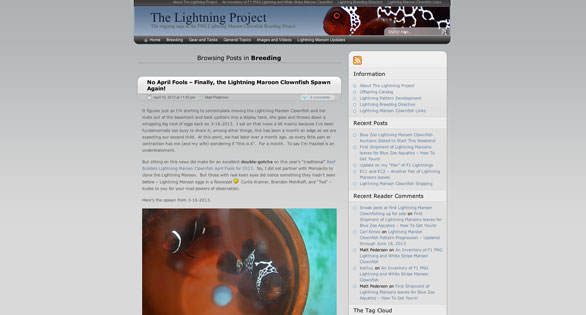 Lightning Project blog is a journal documenting the challenges and successes of Matt Pedersen encountered in his attempts to breed this unusual clownfish.