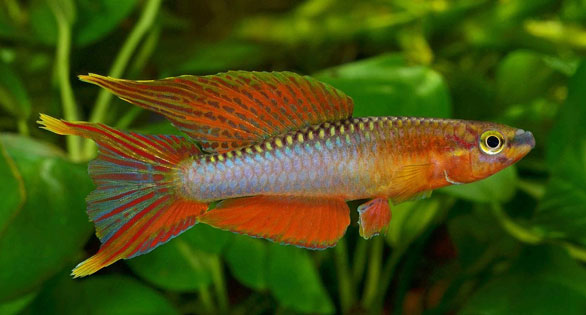 A strikingly handsome new species of killifish from the Pama River, a small tributary of the Nyong River flowing into the Gulf of Guinea in Central Africa’s Republic of Cameroon has been described by a team of European researchers.

The authors, from France’s Institut des Sciences de l’Evolution, Université Montpellier, describe the fish’s distinctive orange and blue-grey pigmentation and report that DNA testing has found that the new species is “genetically differentiated from all the other Chromaphyosemion species.” The official description appears in the journal ZOOTAXA, 3670 (4): 516-530.

The fish was first collected in 2007 Jean-Francois Agnese followed by additional field research in 2008 and 2010.

All About Chromaphyosemion an evolving website for “killiphiles” published in French, but with translation available via Google Translate. Copyright © 1998-2013 – Olivier Legros.