It’s been dubbed the Blue-bellied Night Wanderer, Cyanogaster noctivaga—Cyanogaster meaning blue belly and noctivaga meaning night wanderer. It is 17mm long, and in addition to its bright blue belly, it has large eyes, and unusual-looking snout, mouth and teeth. 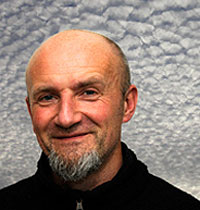 It is only 7mm longer than the world’s smallest fish, and seems to only appear at night, but the bright blue belly of a miniscule Amazonian fish caught the eye of a team of scientists who spotted that it was a new species and genus.

Britz worked with expedition leader Monica Toledo-Piza, George Mattox and Manoela Marinho from the University of Sao Paulo (USP), Brazil, on the scientific expedition in 2011, with the fish’s scientific description recently published in 2013 in the journal Ichthyological Exploration of Freshwaters. Britz is an AMAZONAS contributor and a world-renowned expert on tiny fishes. 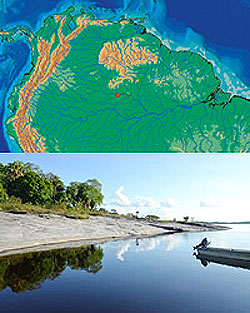 Rio Negro, the largest tributary of the Amazon River. Red dot indicates location where the new tetra was collected.

The blue-bellied fish was discovered in the Rio Negro, the largest tributary of the Amazon River. This area of the Amazon basin is probably one of the best explored, so finding not only a new species but a new genus too, was quite a surprise.

The team could only find the blue-bellied fish in one place on the Rio Negro, and it could only be found at night. “The fish appeared as a fast swimming blue streak in the net,” says Britz.

Not only was the fish hard to find, but as soon as it was lifted out of the net it died. In order to get a photo of the live fish to show its unique colouration, Britz had to improvise.

The Blue-bellied Night Wanderer is tiny, but how does it compare to the world’s smallest fish, which Britz helped study in 2006?

“The largest Cyanogaster individual we collected was 17.4 mm long, which is about 7 mm longer than the largest Paedocypris progenetica.”

The two little fish seem to prefer similar habitats too. Britz explains, “The Rio Negro in Brazil, like the Asian peat swamp forests, has acidic blackwaters and like the peat swamps, it harbours a large number of miniature species.

“Small size seems to be favoured in mineral-poor water and Cyanogaster is another example of this rule.”

The number and shape of teeth, or dentition, is very useful for naming and classifying fish and especially those of the order Characiformes, the group the blue-bellied night wanderer belongs to. 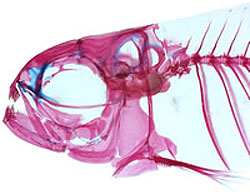 The fish skeleton is stained to make it easier to study its tiny structure, which is only 7mm longer than the world’s smallest fish.

The blue belly has 2 rows of teeth in the upper jaw, an inner and outer. There are only 4 teeth with several cusps (cusps are the tips) in the inner row and 1 conical tooth (only one cusp) in the outer row.

The blue-bellied fish has a unique dentition, number and shape of the teeth in the upper jaw – a single conical tooth in the outer row (marked with a dotted line) and 4 teeth in the inner row.

“All other members of the subfamily Stevardiinae and actually most members of the family Characidae have a different number and arrangement of teeth. So this helps to demonstrate that our little ‘bluebelly’ is something quite different, a new genus,” says Britz.

And there was a final surprise. While the scientific description of the new fish was being prepared, more specimens of the fish were discovered.

Britz explains, “My Brazilian colleagues found a few specimens in the museum collection in Sao Paulo, (Museu de Zoologia, Universidade de São Paulo), which were collected as early as 1980, but had remained unidentified.”

Britz concludes, “This demonstrates again the importance of maintaining museum collections, in which previously unknown diversity can still be discovered.”

Once dead and preserved, the colour is lost, as seen in this museum specimen collected by the expedition.

Cyanogaster noctivaga, new genus, new species, is described from the Rio Negro, Brazil. It
is a miniature fish of the Characidae belonging to the Stevardiinae based on the presence of ii + 8 dorsal-fin rays and four teeth in the inner premaxillary tooth series. The new taxon can be distinguished from all other members of the Stevardiinae by having the reduced number of i + 5 pelvic-fin rays and the presence of a single conical tooth in the outer pre-maxillary tooth series. Other non-exclusive diagnostic features of Cyanogaster within the Stevardiinae are the lack of maxillary teeth, the incomplete lateral line, transparency of the body and conspicuous blue abdominal region. Mature males have hooks on the pelvic- and anal-fin rays. A detailed osteological description of the new genus and species is is presented with comments on its putative relationships.