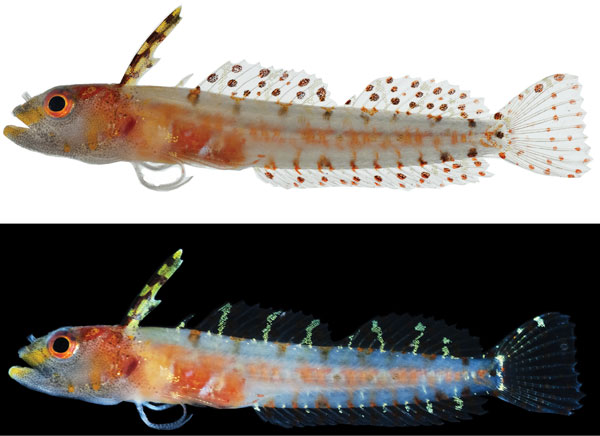 Sometimes science just happens, as when a new species turns up by happenstance, hope, and a generous measure of luck.

A beautiful new species of blenny has been discovered as unintended bycatch during targeted specimen catching off Curaçao at about 550 ft (157-167 m) depth  as a part of the Smithsonian Institution’s Deep Reef Observation Project (DROP). The new species, Haptoclinus dropi, gets its name from the project’s abbreviation and is one of numerous new ray-finned fish species emerging from this project. For DROP expeditions the Substation Curaçao’s manned submersible Curasub is used to catch specimens.

Haptoclinus dropi is only around 3/4 inch (2cm) in length with a striking color pattern that includes iridescence on the fins. The proposed common name of the species is Four-fin Blenny, recognizing the division of the dorsal fin into four sections, which is a distinguishing feature of the genus and unique among blenniiform fishes. 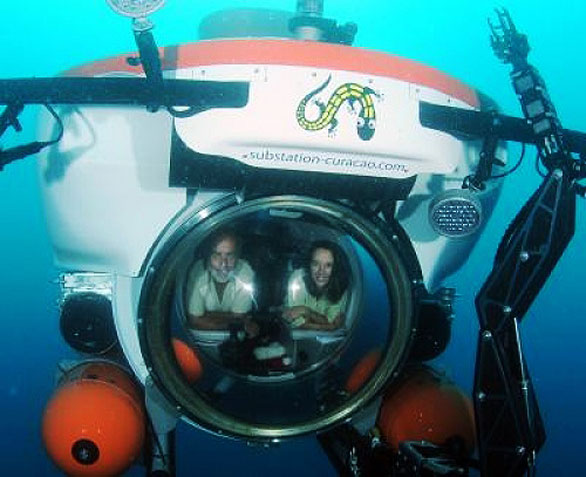 Drs. Carole Baldwin and Ross Robertson in the CURASUB, being used by the Smithsonian Institution’s Deep Reef Observation Project (DROP).

“Targeted fish specimens are collected with the sub’s two flexible, hydraulic arms, one of which is equipped with a quinaldine ejection system and the other with a suction hose,” report Drs. Carole Baldwin and Ross Robertson who have published a description of the new species in the open-source journal Zookeys. “Occasionally, small, inconspicuous, non-targeted fishes are collected along with the target specimens. One bycatch specimen collected between 157 and 167 m represents a new species and the second known species referable to the blenniiform genus Haptoclinus Böhlke and Robins, 1974.”

While generally used as tourist attraction because it travels at much greater depths than divers can reach, the Curasub is also used for scientific marine research. Targeted fish specimens are collected with the sub’s two flexible, hydraulic arms, but very often small non-targeted fish are also caught in the process. A new species of tiny blenniiform fish has been discovered in the biodiversity rich waters of the southern Caribbean. 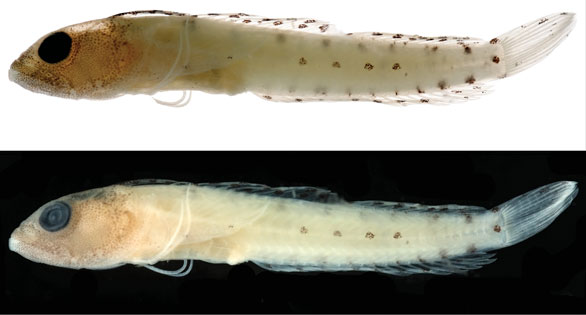 Haptoclinus dropi, sp. n., holotype, USNM 414915, 21.5 mm SL, female. Both photographs
were taken after the fish was in preservation for several months, the top image against a white background,
the bottom against a black background. Photographs by Ian Silver-Gorges.

“Below the depths accessible using scuba gear and above the depths typically targeted by deep-diving submersibles, tropical deep reefs are productive ocean ecosystems that science has largely missed. They are home to diverse assemblages of new and rare species that we are only just beginning to understand,” says Baldwin. She and Robertson expect that this find will be just one of a number of new deepwater fishes found in the diversity-rich and previously unexplored waters of the southern Caribbean.

The study was published in the open access journal Zookeys.

A second species of the blenniiform genus Haptoclinus is described from deep reefs off Curaçao, southern Caribbean. Haptoclinus dropi sp. n. differs from the northwestern Caribbean H. apectolophus Böhlke and Robins, 1974, in29 total dorsal-fin elements—III-I-XIII, 12 (vs. 31—III-I-XIV, 13 or III-I-XIII, 14); 19 anal-fin soft rays (vs. 20-21); 12 pectoral-fin rays (vs. 13); 12 precaudal vertebrae (vs. 13); and the first dorsal-fin spine longer than the second (vs. the second longer than the first). It further differs from H. apectolophus in lacking scales (vs. three-quarters of body densely scaled), ina distinctive pattern of spotting on the trunk and fins in preservative (vs. no spotting), and in lacking a fleshy flap on the anterior rim of the posterior nostril (vs. flap present). Color in life is unknown for H. apectolophus, and the color description presented for the new species constitutes the first color information for the genus. Familial placement of Haptoclinus remains questionable, but the limited relevant information obtained from morphological examination of the new species provides additional support for a close relationship with the Chaenopsidae. Haptoclinus dropi represents one of numerous new teleost species emerging from sampling to 300 m off Curaçao as part of the Smithsonian Institution’s Deep Reef Observation Project (DROP).