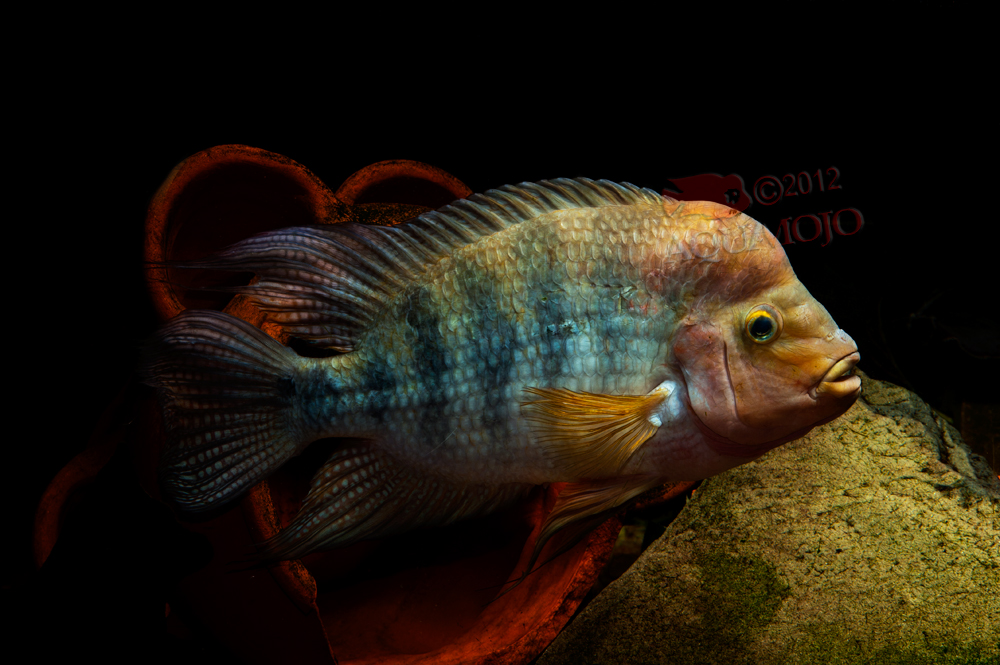 The large wild (F0) male Amphilophus hogaboomorum @ 13″ (33 cm), sometimes known as the Guayas Cichlid or the Harlequin Cichlid, a native to Honduras.

I don’t spend enough time just watching my fish.  And I’m sure I’m not alone in that sentiment.  Most would agree that a good deal of “tank time” is cleaning, feeding and maintaining the tanks…and of course the weekly water changes.   I have two breeding pairs of these beautiful Amphilophus fish.  Each pair is in a 180-gallon tank by themselves so they have plenty of room to do what cichlid fish do best…breed and raise fry.

One of the coolest things, by far, is watching the pair guide their fry back and forth across the tank.  Last night as I was watching the one pair, I noted that their group of fry had managed to split themselves in half across both sides of the tank.  So I kicked back to see how the pair would handle the dilemma. The female of the pair is always the action parent, darting back and forth between the two groups. The male also participates, he has to…the female seems to keep him moving as well with well placed nips on his fins.

As I watched, the female would swim to one group, flare her fins, shimmy then swim back toward the other side of the tank.  Ever so slowly the fry would inch back across the tank. The male would remain in place with the larger group, the female swinging by to “touch base” and give him a nip to keep him alert (I guess).  It was very interesting to watch the dynamics between the two and their fry.  Enjoy the photos! 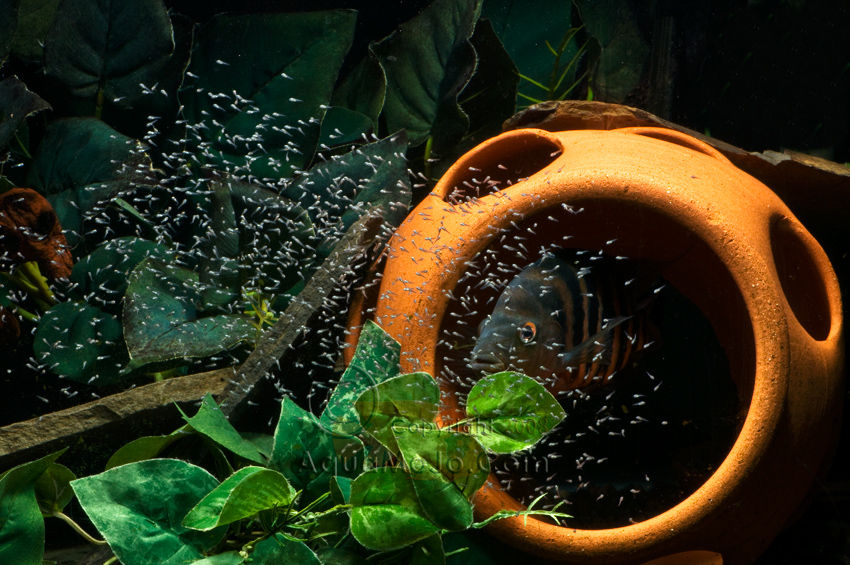 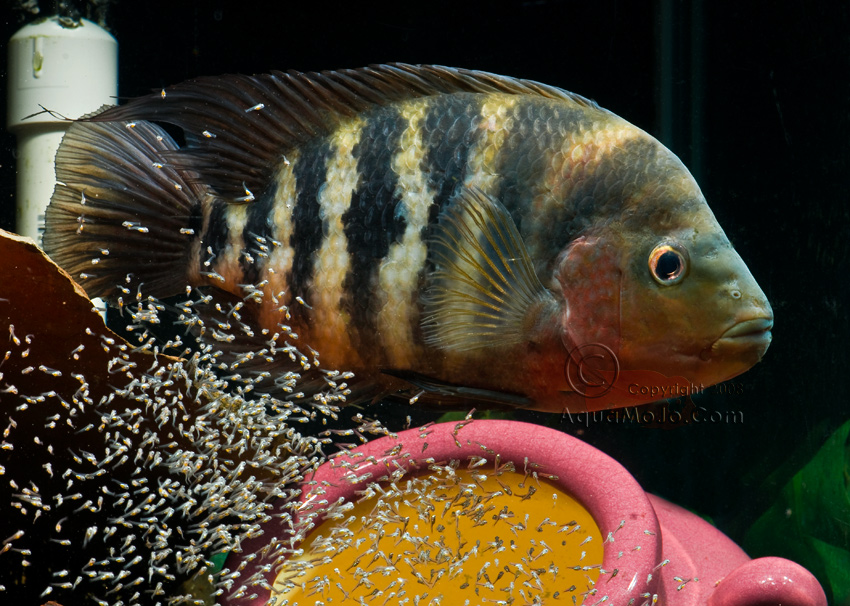 The male keeping an eye on one half of the fry while the female got busy rounding up the stragglers. 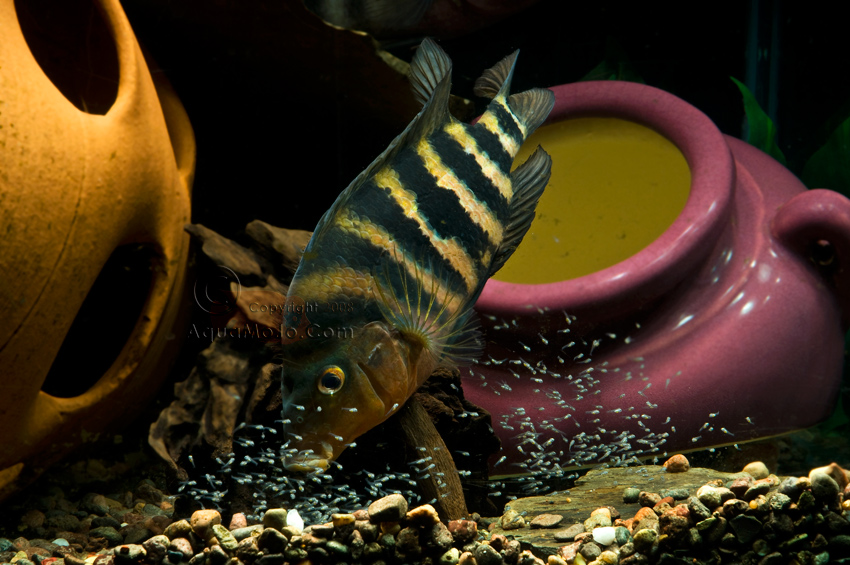 The female rounding up the fry on the other side of the tank. 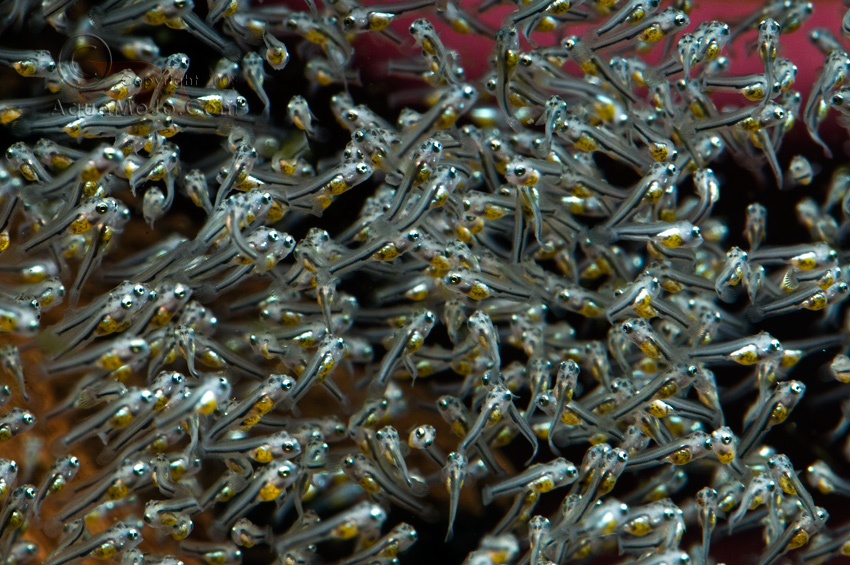 Imagine having to worry about ALL of these “kids” at one time. No wonder cichlids are expert parents. 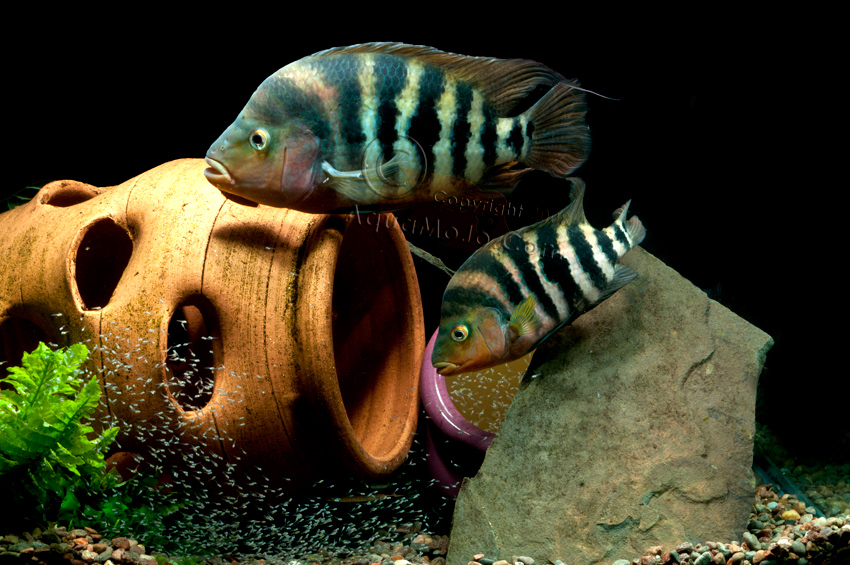 Both male and female Amphilophus hogaboomorum with the entire group under their watchful eye.

I've been in the aquarium hobby ever since I was a kid. My love of photography dovetailed nicely with the hobby. Over the years it has become more of an obsession than a hobby. I am the owner of Aquamojo.Com and have been posting photos of mine and other fish for close to two decades under the title "Today in the Fishroom". I pride myself at ALWAYS answering questions regarding my fish or the photography...and encourage any and all.