I am back to continue with my posting after an unexpected absence due to bodily self-decomposition.  A word to the wise, don’t get old.  Or if you do, don’t let your body know.  It might just not like the process.   Anyway, on with my  tales from the slimy lagoon…

In an earlier discussion, I mentioned that aeons ago I saw large female whelks depositing egg capsule masses on one of my research sorties to “my” intertidal study site near Homer, Alaska.  I found this to be very interesting, at the time I was casting around for some research to do, and here a potential easily-done project dropped into my lap. Normally I don’t trust to luck, but I wasn’t about to overtly examine the buccal anatomy of this presentation equine.  I was able to identify the animals, but, at that time, there was no record of them depositing egg capsules in a mass or otherwise.  In point of fact, virtually nothing was known about the natural history of these beautiful whelks, an artifact of being found in an out-of-the-way place where the accumulated knowledge of such critters was minimal.  In fact the only reason I knew the whelks were at this area was that I had taken some students down to the site the previous autumn on a class field trip. 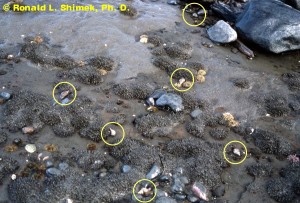 Neptunea pribiloffensis whelks on the study beach. The substrate is sandstone, and the “fuzzy” clumps are masses of a feather duster worm which is one of the common prey of the whelks.

Figuring that the presence of essentially unknown animals that I was interested in learning about would lead to an easy publication, the following spring I decided to do a little bit of basic research on the snails, and went down to the site to make some field observations as well as to collect a few animals for gut analyses.  Having examined some other Neptunea, including some specimens for this species, I knew I had to look at the gut contents to determine what they were eating rather than simply examining their feces, which was a technique I had perfected for some other snails for my doctoral research.  Fecal analysis is a much preferred technique when compared to gut analysis, as the animal is not harmed in the process.  However, fecal analyses require that the animal’s foods leave some indigestible and identifiable trace in all the feces, and that was not the case with these animals.  They could eat a wide variety of things, including carrion and animals possessing no hard parts at all, as well as some polychaete worms having chaetae, which would be passed through the gut undigested.  It was during a trip for the collection of some specimens for the dietary study, that I noticed the ovipositing females. 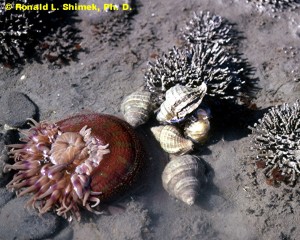 Obviously, this was an immediate serendipitous chance for some more and different research.  As with every other aspect of Neptunea pribiloffensis life, virtually no aspects of their reproduction were known.  I had budgeted a couple of days of “research” time on the beach.  I figured I would need about fifteen minutes to collect all the animals I needed for the gut content work, but the site was beautiful and in the spring the weather was often gorgeous.  I had been told that when the Russians owned Alaska, their anecdotal name for the Homer region was “летом земля or Summer land” for the nice climate- a distinct contrast to effectively everywhere else in the region.  Consequently, I truly considered it a terrible hardship to have to make the four or five hour drive to Homer to do field work.  Given how low the tides needed to be for my research, the field work time each day didn’t amount to much time being spent, which meant my assistants and I had plenty of time to work up our samples in the motel we stayed in while working there. 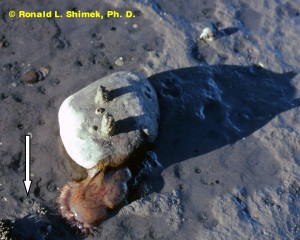 Egg capsule masses near a large sea anemone. Note the whelk to the upper right. And my experimental  marker is indicated by the arrow.

A couple of fundamental questions immediately presented themselves.  Is there any benefit for the whelk to place its egg capsule masses near the anemones?  Likewise, is there any benefit for the anemone to have a whelk egg capsule mass near it?  Today, it seems obvious that the answer to either or both of these questions would almost certainly  be yes, but in the late 1970s very little was known about boreal marine symbioses, in general, and specifically interactions between spawning whelks and anything, let alone anemones.  At the time, there were no hard data either supporting or rejecting a hypothesis of benefit to either party for such an interaction.   And here I was, standing plumb in the middle of a wonderful opportunity in a beautiful area with the chance to address this question.

So!!!  Boy-Scientist, at the ready!  I grabbed some buckets, my camera, my voice-activated tape recorder, a meter-stick, and kazango!  I was research bound!

Obviously, I didn’t go into this situation as a naïve biologist.  I had just spent several years working at a laboratory where many researchers were studying a wide variety of marine research topics.  As one might expect, there was a lot of cross-pollination of information and ideas.  For example, one of my acquaintances during that time was completing the scientific description of one of the larger, previously unknown, sea anemones from that region.  He told me that it would be called “Tealia piscivora”, a name meaning “the fish-eating Tealia”, an apt name because specimens had been found with their gut cavity full of fish; herring, as a matter of fact.  Those data told me that the nematocysts of a sea anemone closely related to the one I was seeing in Alaska could pack a really potent sting.  And, therefore, the anemones might well be able to protect the snails’ developing progeny. 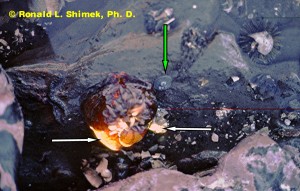 Also, I knew from other researchers that individuals of the sea urchin species, Strongylocentrotus franciscanus, would eat the egg capsules of other whelks, and that those whelks protected their spawn by attacking any urchins that approached their egg capsules.  Given that the “green sea urchin” Strongylocentrotus droebachiensis was common in this Alaskan intertidal habitat, not only was it was possible, indeed, it was likely, that it would eat the egg capsules and the eggs they contained if given the opportunity. 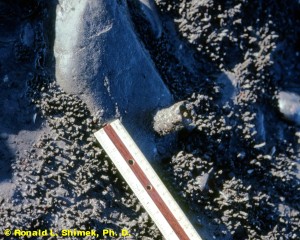 An egg mass that is about a year old. The top has been eaten off by sea urchins.

I immediately set about collecting some animals and egg capsule masses, and setting up some experiments both in the laboratory and in the field.  Some of the experiments were long-term, running about a year in the field and lab, others were of shorter duration.  When I was finished with all of the work, I thought would be able to answer many of the questions necessary to be able to assess the hypotheses. 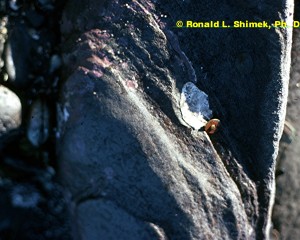 An experimental egg capsular mass is completely gone after the anemone’s removal. All that is left is my marking washer.

This Snail Has Babysitters!!

I found a series of statistically significant results.

The anemones could deter predation on the egg capsule masses in the laboratory experiments and certainly appeared to do so in the field.  My lab tests showed that the anemones can protect the capsular masses from the sea urchin.  Finally, the sea anemones can eat the sea urchins.  In the lab tests and field observations indicate the major cause of capsular mortality is urchin predation.  Lab and field experiments and observations support the hypothesis that the anemone babysitter protects the capsular masses from predation by urchins by eating the approaching urchins. 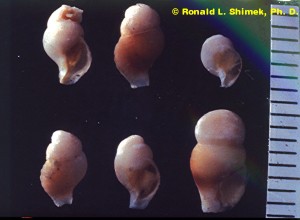 Newly hatched whelks fresh out of the capsule. All six came from one capsule. And each “corncob” like mass would average about 50 capsules. The scale is mm.

This neat little series of interactions started me down the road investigating a number of significantly more interesting anemone interactions that just happen to have some of the most beautiful animals in the world as the actors in the various plays.  More on that in the near future.