Some Ink On The Page 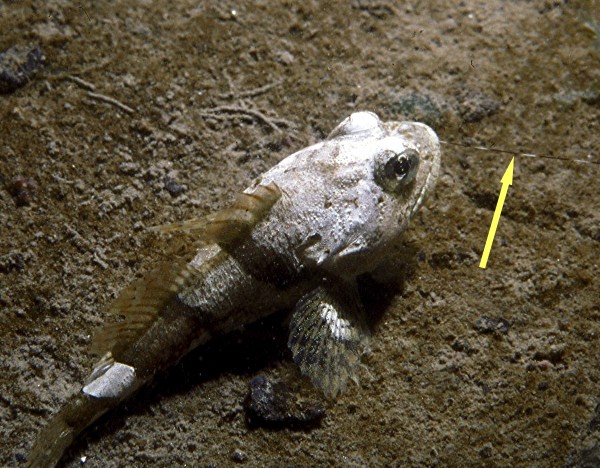 This fish, a buffalo sculpin, Enophrys bison, has just consumed a shrimp; the arrow shows the shrimp’s antenna extending from the fish’s mouth. I was just getting ready to take the shrimp’s picture and “GULP” the fish got there first.

While doing some mindless work the other day, and wanting to escape the drudgery, I put my mind in some other place and started to wonder for the umpteenth time about some of the things I didn’t learn in grad school.  These were some of the important things “the powers that be” (= “the high priests and priestesses of knowledge”, aka “the faculty”) decided we grad students (aka “the acolytes”) didn’t need to know.  I really don’t why some of these things were not mentioned; maybe they were inherently obvious to everybody but me and at least some of my peers, as at times we lowly ones discussed some these issues.

I was in a program that was supposedly providing training, or really more correctly, “insight”, into ecological processes.  Then, about 40 years ago, as now, there was no unified field theory or collection of governing principles of ecology.  There were then, and are now, a few obvious tenets and, other than that, a series of competing hypotheses or ideas.  These were stirred up nicely in some sort of toxic soup by the results of various studies showing something or the other.

One thing that everybody seemed to presume, but with no evidence whatsoever, was that there were some consistent “laws” or “patterns” that held true no matter where you  looked.  As a result of this holistic outlook, there really was no specific mention of the many differences in the attributes that characterized various ecosystems.  More importantly, there was no discussion of why ecological processes or factors were often vastly different in different ecosystems.  I will grant that there are a couple of all-encompassing laws: the First and Second Laws of Thermodynamics come to mind.  Of course, these weren’t discussed, either.  But even once those laws have been factored into systems there isn’t a lot of carry-over of useful ideas or concepts between major dissimilar environments; particularly, for example, from terrestrial environments to subtidal marine ones.  For example, many of the examples we had to deal with in classes were from terrestrial environements, and often they were from birds.  Frankly, these little feathered dinosaurs are so different from marine animals that there is no carryover from these studies to marine examples.

It may seem to be fallacious to compare a terrestrial habitat directly to marine one, but maybe it shouldn’t be.  For example, compare the marine shallow water benthos with a meadow.  Both are comprised of unconsolidated substrates with a significant array of organisms living in the substrates as infauna.  Both of the substrate environments have a fluid environment overlying them: water and air respectively.  There are some fundamental similarities in these fluid environments.  Both contain plankton and plankton-feeding animals.  In the marine system these are obvious, and with some thought they are also obvious in the aerial environment where flying insects as well as vast arrays of other floating life comprise most of the aerial plankton and various birds and bats are the mobile plankton feeders.

However there are a couple of really pronounced and obvious ecological differences between the terrestrial habitat and the marine one, and no, it isn’t that one is wetter than the other 🙂  The most obvious is the frequency of interactions, if one watches a terrestrial environment, pretty much any terrestrial environment, it is rare to see one wild animal kill and eat another one.  I suspect that most of the readers have only seen a few unstaged predatory events on a land environment in their lives.  In most cases, these events are memorable, and often talked about for a long time; as in, “Do you remember when Uncle Ferd/Aunt Ferdricia actually saw a ______ (fill in the blank: coyote, fox, weasel) kill and start to eat a _________ ( that blank again:  ground squirrel, mouse, snake, grasshopper)”.   Yet, if the same readers were scuba divers, and they knew what they were seeing, it would not be unusual to see several such events involving large and obvious animals on the course of a dive of an hour’s duration in most marine environments.  And in some rich areas, such as the Puget Sound Region, they might actually witness predatory events at the rate of several per minute at times. 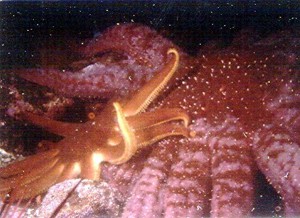 Seastar predation is commonly observed in some subtidal areas.  This image was taken in the cold waters off Vancouver Island, Canada.  Might doesn’t necessarily make right in sea stars, here a small Solaster dawsoni, or Dawson’s sunstar, is attempting to climb on the aboral surface of a much larger Sunflower star, Pycnopodia helianthoides. It did not succeed, the sunflower star “sped” off, easily covering a meter in 10 seconds. If the smaller star had made it on to the back of the larger one, it would have likely completely consumed it over the next week or so.  Image Copyright By Ronald Shimek.

One reason for this difference in ecological dynamics is likely the much vaster array of types of life in the marine environment.  There are only a few animal groups that have made it “big” in the terrestrial environments, and most of these, such as insects, vertebrates and snails are either highly mobile, making predation difficult, or fairly well defended against casual attackers or both.  In the marine ecosystems there are a lot of types of animals that are slowly moving or sessile, and these critters are essentially “meals ready to eat”, provided a predator can stumble across them. 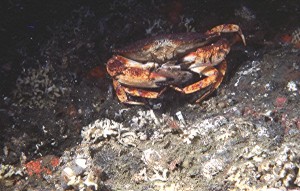 Here the highy mobile and, quite ferocious, predator, Cancer productus or Red Rock Crab, has captured a small pink scallop, Chlamys henricia, and is eating it. The substrate here is an example of one of the few non-coral reef animal reefs. These reefs, which can be over 300m (1000ft) long, 30 m (100 ft) wide and 40 m (130 ft) high are made by a type of featherduster worm called a sabellariid, which in their millions glue sand grains together to form their tubes and in the process create the reefs. The worms’ feather duster crowns are visible as the light purple structures in the foreground. Image Copyright By Ronald Shimek.

Probably as result of this tremendous array of food either sitting on or moving slowly around the ocean bottoms, there has been a burgeoning of active marine predators, particularly in the last 100 million years or so.  And it follows from this, that natural selection would be at work on both the predators and their prey, providing an advantage to those prey whose physiology allows them to develop defenses.  Likewise, there becomes an advantage to those predators that can overcome such defenses.  It has been said that the marine world is rife with various examples of the coevolution of predators and prey. 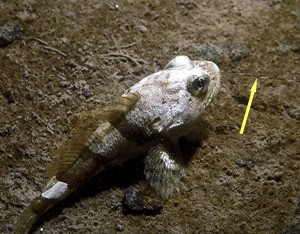 This fish, a buffalo sculpin, Enophrys bison, about 7.5 cm (3 inches) long, has just consumed a shrimp; the arrow shows the shrimp’s antenna extending from the fish’s mouth. I was just getting ready to take the shrimp’s picture and “GULP” the fish got there first. Image Copyright By Ronald Shimek.

This link provides a good illustration for a tasty soft-bodied animal that has undergone some selection which has resulted in a magnificently effective anti-predator defense.  Incidentally, it the link also provides a good illustration of why it could be dangerous to keep either the predator or the prey in a reef aquarium.  The predator shown here, a spiny lobster eats virtually anything it can catch, and in the confines of an aquarium it can catch anything it wants.  The prey is defenseless until it releases the toxic ink affecting not only the lobster, but virtually every other mobile carnivore animal in the aquarium.