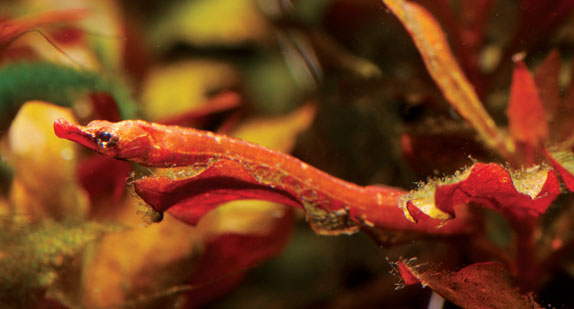 The African Freshwater, or Dwarf Red Snout, Pipefish, Enneacampus ansorgii, is exotic and rare enough that even expert aquarists assume it is more at home on a coral reef than in a clear freshwater stream 100 miles from the ocean. Now this sometimes brilliantly pigmented little species is being bred in captivity and is starting to enter the aquarium trade.

Husbandry accounts suggest that wild specimens are certainly difficult to keep alive, generally requiring live foods such as live brine shrimp, blackworms, Daphnia, cyclops, and even the fry of livebearers. Wolfgang Löll makes a compelling argument that live glassworms are the best food for pipefishes such as E. ansorgii because they survive for several days in the aquarium and will tolerate slightly brackish water.

Aquarium literature, where this fish was formerly known as Sygnathus ansorgii (Boulanger, 1910), generally suggests that the inclusion of salt is helpful for this species, although it is clear that some populations of the species have no contact with anything remotely close to a marine environment. A general rule is to house them in a small species tank in slightly brackish water or a .5-percent sea salt solution. Their reported range includes the Ogooue River of Gabon, Cameroon, and Equatorial Guinea. (American aquarist and award-winning breeder Ted Judy reports collecting males brooding eggs in pure, freshwater river conditions in Gabon.) They produce relatively large offspring.

According to Hans-Georg Evers, editor of AMAZONAS in Germany, this species has been bred for decades in eastern Europe, and many color variations are seen, but full-red specimens are new to the marketplace. 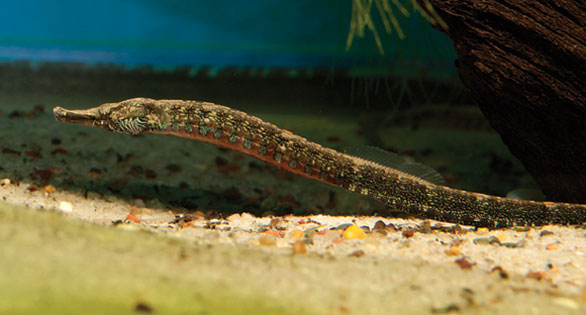 In March of 2013, Segrest Farms in Gibsonton, Florida, announced the arrival and almost immediate sell-out (within 24 hours) of captive-bred E. ansorgii. These fish came in at a 3–4-inch (7.5–10-cm) size, which is close to the maximum adult size of 5–6 inches (12–15 cm), and were not produced by Florida or Asian fish farms, as many aquarists suspected, but actually made their way to North America from the Czech Republic, likely via a small-scale specialist breeder.

While this certainly isn’t the first time this species has been successfully bred in captivity, this commercial availability represents a potential shift in our perception of the species. Just as captive-bred marine seahorses are infinitely better suited to captive foods and life in an aquarium, these captive-bred E. ansorgii were feeding on frozen Cyclops (CYCLOP-EEZE®), and might be weaned to small, high-protein pellet foods or potentially even flake food. Truly, commercially viable captive-bred specimens may well redefine these species. 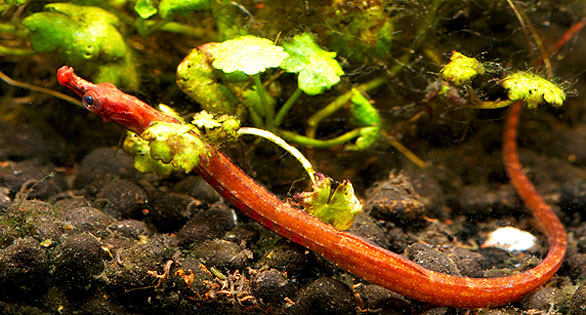 The overall red coloration is apparently the result of year’s of captive-breeding by Czech aquarists. Limited commercial availability is coming. Image by Mike Tuccinardi/Segrest Farms.

Segrest’s Mike Tuccinardi suggests that “it’s unlikely they’ll be a regular stock item, but it wouldn’t be out of the question to see them in some of the more specialized local fish stores across the country over the next few months. We are sold out right now, but we’ll be bringing in more soon.” He adds, “As for care, treat them as you would their saltwater cousins—avoid boisterous or aggressive tankmates, give them lots of cover, and feed them frequently.”