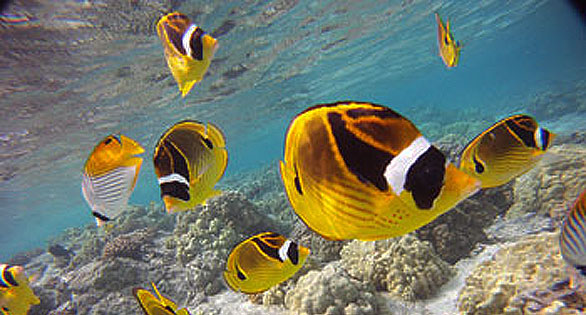 Marine protected areas (MPSAs) are becoming a cornerstone of reef and ocean conservation, involving the setting aside of specific waters to preserve and manage vulnerable resources like declining fish stocks.

In theory, MPAs provide a refuge in which fishes can breed and help replenish nearby, open areas with their offspring. However, biologists admit there is still much to be learned about how MPAs function and how they impact both fishes and those who fish for them.

A new study of marine protected areas on the West Coast of the island of Hawaii, a core region for aquarium collectors in the Aloha State, has turned up what the scientists call a “counterintuitive finding.”

Surprisingly, fishers near marine protected areas reported having to travel farther to catch fish but were actually able to maintain or improve their social and economic well-being, according to a study by fisheries scientists at Washington State University and in Hawaii.

The study, reported in the journal Biological Conservation, is one of the first to look closely at how protected areas in small nearshore fisheries can affect where fishers operate on the ocean and, as a consequence, their livelihoods.

“Where MPAs are located in relation to how fishers operate on the seascape is critical to understand for fisheries management, and this is an important lesson to draw from this study,” said Todd Stevenson, the paper’s lead author, who did the research as part of his WSU doctorate.

Nearly 6,000 MPAs have been set up around the world, according to a 2010 report by the International Union for Conservation of Nature and Natural Resources.

Stevenson focused on a network of MPAs on the west coast of the island of Hawaii and one of the state’s most lucrative nearshore fisheries. While the fishery is relatively small, with only about 40 active fishers providing livestock to the aquarium trade, small-scale fisheries actually employ more people than large-scale operations and catch fish more efficiently. Their small size also makes fishers more vulnerable to changes, as a poorly placed MPA can have a large effect on their options.

Starting in 1999, the west Hawaii MPAs closed more than one-third of the coast to aquarium fishing. Many areas were closed to avoid conflicts with dive charters and the tourism industry, particularly in the more populated central part of the west coast. This is where most ports and launches are, too. As a result, fishers had to go farther in search of fish.

“It’s not uncommon to establish MPAs in areas where fishers operate, as these are usually biologically and economically productive spots that receive heavy fishing pressure and thus need the most protection,” said Stevenson. “When MPAs are placed in these locations, they displace fishers into new, slightly less optimal fishing spots.

“This happened in Hawaii,” he said, “and it appears to have had little impact on the socioeconomic well-being of fishers who remained involved in the fishery since before the MPAs were in place, which is somewhat counterintuitive and makes our study interesting.”

Without a separate economic analysis, said Stevenson, it’s hard to say how the changing fish stocks might have affected fishing incomes. He and his co-authors—WSU Professor Brian Tissot and Bill Walsh of Hawaii’s Division of Aquatic Resources—conjecture the fishers had higher yields, in part because they were steered toward underexploited or more biologically productive areas.

Fishers also benefited from rising prices for yellow tang, the most abundant and popular fish in Hawaii’s aquarium trade, and price wars among island buyers working to satisfy the growing demand from coral aquarium tank owners.

Marine protected areas (MPAs) have been implemented across the globe to protect marine biodiversity, critical habitats, and to enhance commercially harvested fish stocks. Although ecological effects of MPAs are well documented, their impacts on fishing communities and the spatial distribution of fishing effort remains elusive and poorly understood. In 1999, a MPA network was implemented to protect against perceived declines of reef fish harvested for the aquarium trade on the island of Hawaii. We investigated how the MPA network altered the spatial distribution of fishing effort and impacted perceived fisher socioeconomic well-being and fishing operations, as well as if the economic and catch benefits offset costs in the newly established non-MPA fishing areas. Data were collected using social surveys, experimental fishing, and catch reports. The results suggest the MPA network significantly displaced fishing effort from the central to the northern and southern coastal regions of the island farther from ports of entry. Estimated catch revenues and experimental catch per unit effort were statistically greater as distance from port of entry increased. Perceived fisher socioeconomic well-being was unaffected, but perceived fishing cost and travel time increased significantly post-MPA network implementation. Although the MPA network displaced fishing effort, fisher socioeconomic well-being was not compromised likely because they expanded their operating range and favorable market factors helped offset potential economic losses. Our findings are relevant because they help clarify how MPA networks alter spatial fishing behavior and impact the well-being of small-scale fishers.