One of the more unlikely places to find a nice image of one of my favorite types of invertebrates is the Astronomy Picture of the Day (APOD).  Normally, these images are of beautiful or interesting astronomical objects or spacecraft or terrestrial images somehow related to these subjects.  It is quite unlikely to find animals of any sort pictured on the site.  Like many other folks enthralled the beauty of “space” objects I look forward to examining the APOD daily.  Imagine my surprise to find a spectacular Scanning Electron Microscope image of a water bear or “moss piglet” on the site on the sixth of March, 2013. 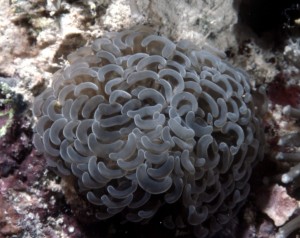 Although tardigrades were not likely be found on this specimen of Euphyllia anchora proper, they were likely common living in the sediments surrounding the small coral head, where they would be preying on other sediment infauna.

Just about the neatest critters around, these animals, more formally known as Tardigrades, seem like Mama Nature’s joke.  Related to velvet worms, but with only eight stumpy legs, albeit ones ending in quite impressive claws, they remind one for all the world of a cross between a roly-poly, miniature, panda bear and the Pillsbury Dough Boy.

Tardigrades are grouped in “The Ecdysozoa”, the major branch of the animal kingdom containing all of those species that must shed their skin to grow.  They have an integument or exoskeleton superficially similar to, but much simpler than, those found in arthropods.  Nonetheless, a tardigrade does have to “shed its skin” for growth to occur.  They are also animals that suck.  Quite literally!  Their mouth is on the tip of a piecing stylet or tube that extends from the front of the beast.  They punch a hole in their prey organism, a moss cell or a nematode and, with a highly developed set of muscles located just behind their stylet, suck the innards out of their prey.

A few tardigrade species are found in marine habitats, including coral reefs, where they are most commonly found living in the sands around the corals, but as a group they are much more common in terrestrial habitats, particularly mossy ones.  They have the ability of undergo what has variously been called “cyptobiosis” or “anabiosis”.   Basically, the term means that if they are dried out – gently – they can survive as a living, but dried out, resting stage called a “tun” for a very long time.  Specimens have been reportedly recovered from dried moss collected in the 1750s and left dried out and mounted on herbarium sheets in museums.  Placed in water, some of the dried tardigrades rehydrated and continued their life after their long nap.

While dried they have been immersed in liquid Helium at 4K ( = -452.47°F), blasted with Gamma rays, and heated to a couple of hundred degrees Celsius;  and then if given the right conditions, they can be rehydrated and resume life.    And they have been sent into space – really into space – in the hard vacuum outside the space station, and subsequently covered, rehydrated, and apparently were none the worse for wear.  Although they are called extremophiles, I think they are probably better considered to anti-extremophiles.  Extremophiles thrive in really nasty environments while tardigrades, the ultimate dodgers, avoid really nasty environments by passing through them in a tough resting stage.

I used to have a laboratory exercise in my former invertebrate zoology classes called “instant animals”.  This was the only lab in my entire course devoted to non-marine critters.  The lab’s instructions directed each student to bring in a small clump of dried moss from the side of tree or building or rock.   That moss was placed in a finger bowl and either some distilled water or pond water filtered to remove all non-bacterial organisms was added.   Then we waited, typically about 1/2 hour, while I babbled on giving a short lecture.  Then, when that was done, the students took a look at their moss.

And…  Lo and Behold…  live tardigrades were found – often in high abundance, sometimes in low abundance, but they were always present.  Also present were bdelloid rotifers and nematodes, and occasionally some other things.  It was always – always – a really fun lab!  Tardigrades are, plain and simply, “cute”.  By the end of an afternoon observing them everybody was in a cheery mood, and had learned something about some of the true wonders of the animal world.