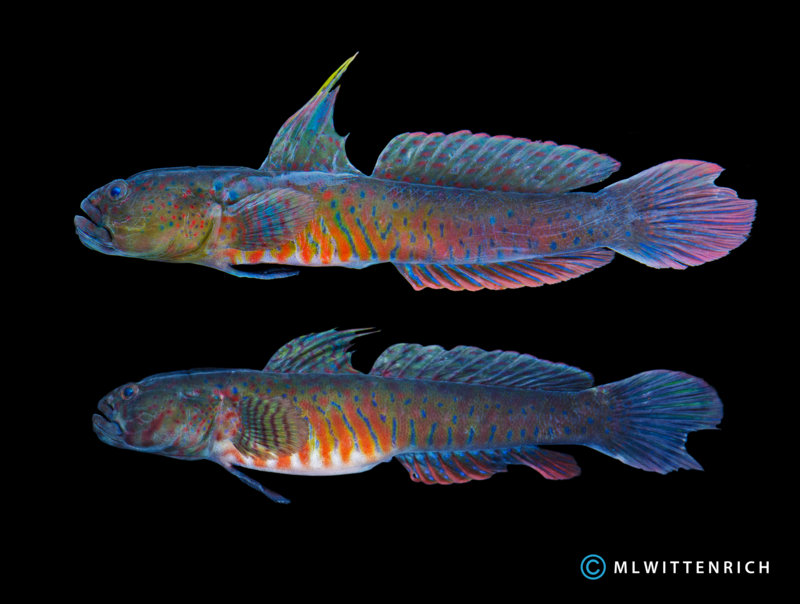 We can add another species to our ongoing captive-bred marine aquarium fish list this week with the announcement of successful captive breeding of the Crested Oyster Goby, Cryptocentroides gobiodes.  At first glance, it’s safe to say most aquarists are going to credit Rising Tide with claiming another “species first”.  However, Rising Tide’s story is much more complicated, since Dr. Matthew L. Wittenrich and the rest of his team at the University of Florida Tropical Aquaculture Laboratory were actually working with “F1” broodstock.  More explicitly, the broodstock used was itself captive-bred.

According to Wittenrich, it turns out that Amy Drehmel, an aquarist based in South Carolina, obtained broodstock in 2010 and by 2011, had quietly succeeded in being the first to rear this attractive goby species, unknown pretty much to everyone outside of a very small circle.  Of course, in attempting to double check that fact, we couldn’t find any information published by Drehmel beyond a short note about her obtaining the species.  So while Wittenrich et. al. have done a good job of citing Drehmel’s prior work and building upon it, we wonder if Drehmel’s success will be truly recognized by the aquarium hobby at large.  More to the point, if the Rising Tide team had omitted this information, it’s fair to say that the world would automatically presume that they were the first to spawn and rear this species, not Drehmel. 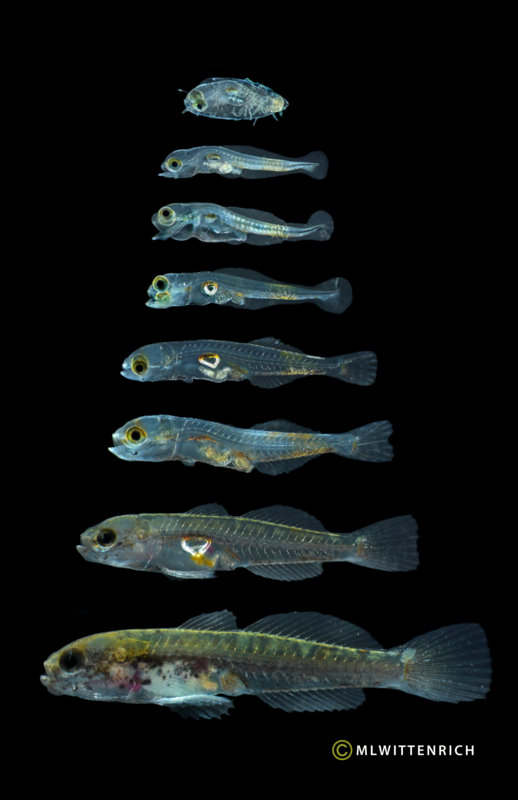 In the past few years, I have repeatedly encountered aquarists who have accomplished amazing things, yet no one knows about them.  Sometimes, this lack of notoriety and due respect is even annoying to said aquarist, particularly when some other aquarist later succeeds in a similar project and receives the accolades and attention of the community.  Of course, I often find that such accomplished aquarists failed to do one thing; they failed to document and share their discoveries and findings with the world!

Some might ask why “credit” matters.  It matters when you realize that for most innovative aquarists, “credit”, and the recognition and respect that comes with being the first to accomplish something, is often the only external motivator and reward provided freely by our collective community.  Case in point, it is not Amy Drehmel who has leveraged her discoveries into a commercial offering of the species, rather it is FishEye Aquaculture (who announced the commercial availability of the species today).

Certainly, I assume Drehmel was ecstatic about her accomplishment, being the first to breed a species (having done so myself, it was the culmination of a boyhood dream to innovate, and immensely satisfying).  Imagine how it would feel if someone else had come along in 2012 and claimed to have been the first to breed the species.  Frame this with the added reality that since this hypothetical “second” success would’ve been the first publication of the accomplishment, the collective world would have accepted this other aquarist as the pioneer, not Drehmel.

When it comes to being recognized for innovation, I’d encourage aquarists to be proud of their achievements and not keep them quite.  After all, the entire aquarium hobby and industry thrives, and grows exponentially, when information is shared and collaboration is fostered.  A story like this potentially points dozens of hobbyist marine breeders in a new breeding direction, searching out other attractive species of Cryptocentroides gobies as breeding project candidates, while a formerly rare species may now become more available (and presumably affordable) as a direct result of this breeding success.  None of that would have happened without Drehmel sharing her success with Rising Tide, who then repeated the success and has finally broadcast it to the masses.

Meanwhile, there are stories just like Drehmel’s that to date have failed to make it to the public’s attention (insert personal nudge at new-father and talented fish breeder friend Mike Hoang).  Some stories are currently being worked on as future articles for CORAL, but other successes may be destined to remain unknown, or in obscurity, due to a lack of time or interest on the part of an innovator to make the story come to life.  Sadly, I can’t write the story for these aquarists; it is their story to tell!

I believe CORAL Magazine plays a critical role in bringing innovation to a greater audience, especially given our roles as curators of information, weeding through the clutter of the internet.  In my role as a Sr. Editor, it’s my job to help innovative aquarists like Drehmel, or you, tell the story. I realize that the thought of drafting an article is often intimidating, but I promise to do my best to make you look good!  The recognition and seeing your name in print is certainly worth it.  That said, we do pay our authors too, so there’s even a financial incentive to telling your story.  Perhaps most importantly, by publishing your discoveries, you are helping the next aquarist succeed just as you currently stand on the shoulders of all the aquarist who came before you.  Yes, you are giving back to the community.

It’s safe to say that Amy Drehmel’s name will live on in association with the story of the captive-bred Crested Oyster Goby, but it’s also safe to say that it might not have happened that way. “Credit where credit is due” sometimes means making sure you claim the credit that’s rightfully yours!

CORAL loves stories of innovation and chasing the frontiers in the marine aquarium hobby; please don’t hesitate to contact us with your successes.  A word of advice for future innovators, start taking tons of high-resolution photos and good notes now; while they don’t seem important at the start of a project, they will be by the end!  We’d love to hear about your latest innovation – tell us about it!

Congratulations to Amy Drehmel, Rising Tide, and FishEye Aquaculture for sharing a wonderful story about how a fish went from unknown to the latest commercially-available captive-bred marine fish species.  We applaud these ongoing efforts, and keep an eye on a future issue of CORAL for more on this project.