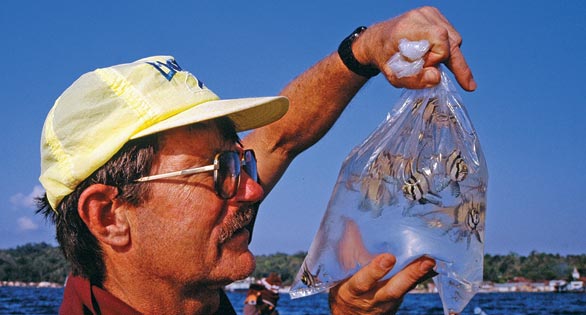 Dr. Gerry Allen with first live specimens of Banggai Cardinalfish he collected in 1994. Note expelled Banggai Cardinal fry in bottom of bag, the first clue that the species was an extraordinary mouthbrooder. Image by Roger Steene.

Editor’s Note: For many of us, Dr. Gerald R. Allen, known throughout the aquatics world as Gerry, is one of the living heroes of reef fish science. A protégé of the legendary Dr. John Randall, Gerry has personally found and described a tremendous array of new fish species and published a wide-ranging library of marine guidebooks and scientific papers, while persevering in efforts to preserve marine species diversity in the Coral Triangle.

As the ichthyologist who introduced the Banggai Cardinalfish to modern science and the aquarium hobby, Gerry has graciously lent his support to The Banggai Rescue Project. Here is an excerpt from his Foreword to the soon-to-be-published Banggai Cardinalfish book, coming from the publishers of CORAL.
James Lawrence
Shelburne, Vermont

My personal quest for this extraordinary fish began just over 20 years ago, when I received a photo of an unusual discovery taken by a diver friend, Kal Muller. Kal took the photo during his recent visit to a remote island off the eastern coast of Sulawesi. The wide-angle shot showed a group of apogonids sheltering near a Long-Spined Sea Urchin. It was definitely something special. In fact, I had never seen such a spectacular cardinalfish and assumed it certainly must be new to science. Somehow I would have to find a way to visit the Banggai Islands and collect this fantastic fish!

It took two more years before I was able to arrange travel to the Banggai Islands, as a side trip in conjunction with a biodiversity conference I planned to attend at Manado, in northern Sulawesi. Timing would be tight as there were only two flights per week to Luwuk, the jumping-off point to the Banggai Group. I invited frequent diving companion and renowned underwater photographer Roger Steene to join the mini-expedition. The trip was arranged for mid-November 1994. We would fly to Luwuk on the Thursday flight, make a quick visit to the Banggai Islands, hopefully collect and photograph the fish, and return to Manado on the Sunday flight. It didn’t leave much margin for error, but the busy conference schedule didn’t allow for extra time. 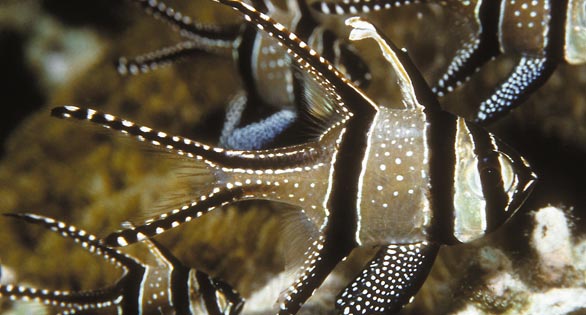 We arrived at Luwuk around noon and spent most of the day arranging passage on the Banggai ferry and shopping for snack foods. The ferry finally departed at midnight and we prepared for a sleepless night on deck with the throng of about 100 passengers, vehicles, and livestock. But to our pleasant surprise we were able to bargain with the captain, negotiating the hire of his personal quarters for 50,000 rupiahs, probably more than he would earn in salary for the entire voyage. The cabin was very small, but nevertheless comfortable. There were two beds, a fan, and an adjoining toilet, and room to spread out the photographic equipment. The journey took 12 hours, but the time passed quickly, especially as we were able to sleep in relative comfort. The last hour of the voyage was spectacular, as the ship negotiated a narrow passage between two jungle-clad islands. At last the vessel docked at the main wharf at Banggai. It was 12:00 noon and time to put our much-discussed plan into action. We didn’t have any time to spare; the ferry would depart in six hours.

Race to the pearl oyster farm
We hired the ferry’s radio operator, whom we nicknamed “Sparky,” to accompany us because he spoke a few words of English. As soon as the ferry was securely tied Sparky went ashore to hire a small motorboat, and within 30 minutes we were headed south along the western side of the island. Kal had given us vague instructions—he had found the fish near a wooden jetty at a pearl oyster farm owned by a Chinese man, in a bay about one hour by motorboat south of Banggai town. Sparky relayed this information to our driver, who nodded in recognition at the mention of “orang cina,” the Indonesian translation of Chinese man. Several pearl oyster farms are located along the coast, but evidently only one is owned by a Chinese person. Forty-five minutes later we pulled in to a narrow wooden jetty at one side of a picturesque bay. 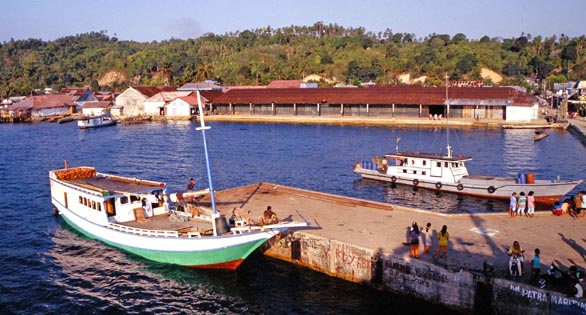 It was a race to be first in the water. In less than a minute we were both submerged, but the fish was nowhere to be seen. I finned slowly away from the jetty, methodically checking every square metre. Kal had previously located the fish in only 6.5 feet (2 m) of depth, so the search was limited to shallow water near the shoreline. The bottom was an uninteresting blend of sandy silt and clumps of seagrass. After a dozen breath-hold dives I sorely missed the luxury of our usual scuba equipment. I inhaled another big breath and plunged down. Swimming close to the bottom, I rounded a large patch of seagrass, and suddenly there it was—a group of about 10 adults huddled around a long-spined Diadema sea urchin.
It’s difficult to describe the level of excitement at that moment, but suffice it to say there was a maximum adrenalin surge. The beauty of this fish in its natural habitat is something to behold. The combination of a striking color pattern and long, graceful filaments on the dorsal and tail fins is truly spectacular.

We had to work fast. I calculated we should spend no more than three hours at the site to allow ourselves ample time for the ferry departure. Further searching revealed several more groups, invariably huddled close to urchins, including a large aggregation containing more than 50 fish. Our first priority, and the most time-consuming chore, was underwater photography. Over the next two hours we took more than 200 shots. This, of course, was the predigital era, so after each 36-shot roll we had to tediously exit the water, towel off, and change film. Finally, with only half an hour remaining, it was time to collect a small sample. This proved a simple task, as the fish retreated among the sea urchin spines where they could be easily sandwiched between a pair of small hand nets. The first attempt yielded six adults, which were summarily placed in a plastic bag. One of the fish spat out an orange-coloured egg mass—not unusual, as male cardinalfishes are well known for their habit of oral egg incubation. A few more specimens were captured and placed in a separate bag. I could scarcely believe my eyes when I checked the second bag a few minutes later. There were more than two dozen miniature replicas of the adult fish that apparently had been expelled from the mouth cavities of two large fish that appeared to be incubating eggs, judging from their swollen throats. Brood care of live young was previously unknown in cardinalfishes. 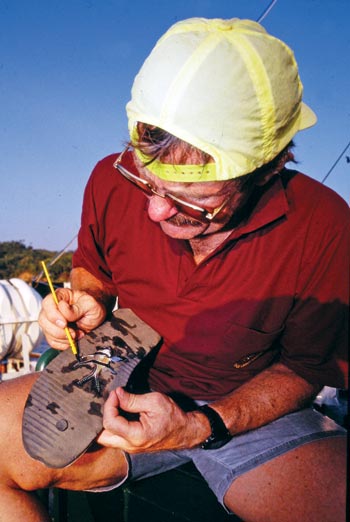 Soul of a marine biologist: Pinning out a collected specimen for preservation and further study on the sole of a flip flop.

Back aboard the ferry, I carefully pinned out the fins of the collected fish and preserved them in formalin solution for later study. We were ecstatic that our carefully laid plans had unfolded with clockwork perfection. Not only had the fish been successfully photographed and collected, but we also gained a sneak preview of its unusual lifestyle and breeding habits. To make things even sweeter, I thought this amazing fish was a new scientific find. However, detailed examination of the specimens in my laboratory at the Western Australian Museum and a review of taxonomic literature proved this assumption to be wrong. The fish had already been described! My investigations revealed that two subadult specimens were collected at Banggai Island in 1920 by a Dutch physician named Kaudern. The specimens had been sent to the Natural History Museum in Leiden and the species was eventually described in 1930 as a new genus and species, Pterapogon kauderni.

Sudden limelight for an obscure species
It seems hard to believe that this magnificent fish escaped the attention of collectors for decades, considering that Indonesia is a leading exporter of marine fishes for the international aquarium trade. However, it remained elusive thanks to the lack of a pelagic dispersal stage typical of most reef fishes and the consequent extremely limited geographic range, confined to an area seldom frequented by outsiders. Suddenly the Banggai Cardinalfish was thrust into the limelight, becoming an overnight sensation. I recounted the tale of its rediscovery
at the Louisville MACNA Conference in 1995, and again in an article that appeared in the May 1996 issue of Tropical Fish Hobbyist Magazine. This was followed by a brief scientific paper reporting our observations of its natural habitat and unusual oral brooding habits. 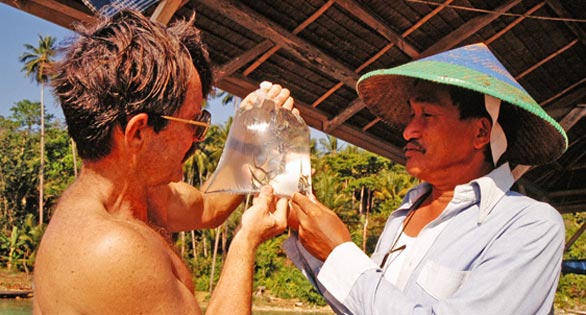 Showing the first collected Banggai Cardinalfish to the Chinese owner of a pearl oyster farm where the species was found in abundance in 1994. Members of the Banggai Rescue expedition returned to the oyster farm in 2012 and found the fish’s population seriously reduced. Image by Roger Steene.

I have experienced a certain degree of guilt for having triggered interest in this species, which almost overnight became one of the most popular species in the aquarium hobby. Considering its limited distribution, I was particularly disturbed to discover that thousands of specimens were being captured and exported each month—not an ideal conservation scenario for a fish that is geographically restricted and produces relatively few eggs compared to most reef fishes.

It is therefore particularly gratifying to see the initial results of the ongoing Banggai Rescue Project presented in this book. Hopefully, this welcome addition to our knowledge of this fascinating species will lead to reforms of the overfishing situation in the Banggai Islands and a solution to the baffling iridovirus problem that has had such a severe impact on imported specimens in recent years. Importantly, this book also includes the latest information for successfully rearing and maintaining Banggai Cardinalfish in captivity, a positive step that will certainly reduce the demand for wild-caught fish, thus making a valuable contribution to the conservation of the natural population.

Addendum: On a subsequent visit to the islands in 1997 I had an opportunity to dive in Banggai Harbor, including next to the ferry jetty. To my surprise the Banggai Cardinalfish was exceedingly abundant among the jetty pylons and elsewhere around the harbor. Had we known this, we could have saved lots of time and energy, not to mention angst, on our initial 1994 visit. 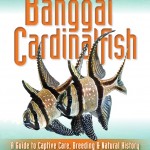 The Book: Now in its final stages of production, the Banggai Cardinalfish book will be published in the spring of 2013. Starting with this excerpted Foreword and continuing with a first-hand look at the Banggai Cardinalfish in its native habitat, the book covers the fish’s natural history, conservation status in the wild, reproductive habits, and ways for small-scale breeders to become local suppliers of captive-bred Pterapogon kauderni. To sign up to receive notice of the publication date and to order the book, visit: Banggai Cardinalfish.