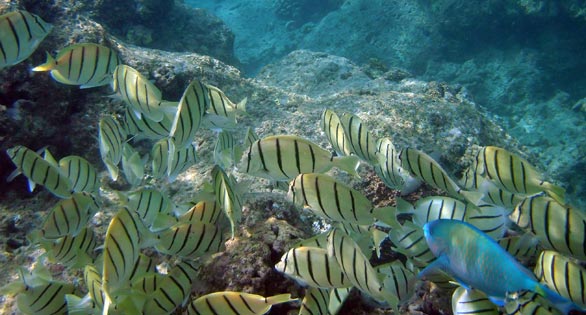 Parrotfish sneaking along with a school of Convict Tangs in Hanamau Bay on Oahu, Hawaii.

The Hawaii Department of Land and Natural Resources (DLNR) held two public hearings on December 5th regarding rules packages that, among other things, would significantly impact the State’s marine aquarium fisheries. The two primary aquarium fisheries in Hawaii are the West Hawaii fishery, the State’s largest aquarium fishery, and the Oahu fishery. While both fisheries are managed by DLNR, they are very different entities, and, as such, statewide rules are difficult to implement. Perhaps not surprisingly, the respective hearings were very different, and it remains to be seen if the end results, which will not be known until January at the earliest, will be different as well.

While the public hearing on Oahu generally garnered support for the Oahu rules package and was characterized as “a win” for local aquarium fishers largely viewed as proactively asking for regulation to ensure resource sustainability, the West Hawaii public hearing was, in the words of one observer, “largely unproductive.” More than 250 people attended the West Hawaii meeting, which, like the fishery itself, proved contentious. According to DLNR officials and the West Hawaii Fisheries Council (WHFC), the rules package seeks to better manage the aquarium fishery and provide additional management measures aimed at resource sustainability and minimizing user conflict. The WHFC is a multistakeholder group that has been working on the proposed rules in conjunction with DLNR Division of Aquatic Resources (DAR) for more than a decade.

If made law, the West Hawaii rules package would impose bag and slot (size) limits on three species of fishes commonly fished for the aquarium trade, establish a 40-species “white list” of fishes permitted for aquarium take, and create a new fishery replenishment area in South Kona, where no aquarium fishing would be allowed. In addition to the aquarium-specific rules, the West Hawaii rules package would prohibit SCUBA spearfishing and the take of nine species of inshore sharks and rays. A host of other new and amended rules are also part of the package.

A new voice in the ongoing Hawaii aquarium fishery debate was the Pet Industry Joint Advisory Council (PIJAC), which issued a release recommending people submit written testimony in support of both rules packages. “While not perfect,” the release stated, “these proposed rules reflect proactive and cooperative efforts by the DLNR and the Aquarium Fish Fishery to regulate and manage the State’s near-shore fisheries.” PIJAC’s involvement represents some of the first substantial and organized defense of the aquarium trade by a trade association with a track record of effectively influencing legislation on both a state and national level.

For its part, DAR believes failure to adopt these rules could be devastating to both the community-based, multistakeholder process and the fishery itself. “This effort,” says DAR Aquatic Biologist Dr. William Walsh, “is the result of over ten years of research, seemingly never-ending committee meetings and public discussions, and mind-gobbling bureaucratic delays. It’s critical for those who are concerned with the well-being and sustainability of our marine resources to provide testimony in support of approval of the rules package.”

The results of the public hearings and written testimony will be presented to the Board of Land and Natural Resources (BLNR), a seven-member board chaired by DLNR Executive Head William J. Aila Jr., in January for final review.