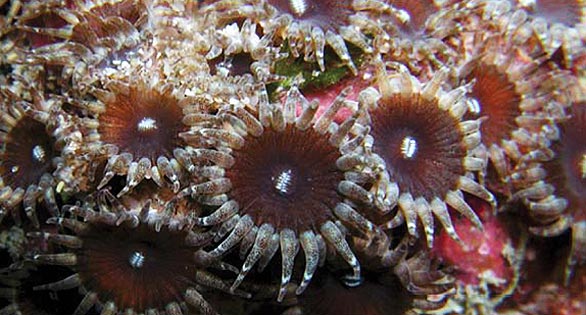 It’s genus of encrusting anemones with only three known species, each from far-flung reef locations.

The species belong to the genus Neozoanthus, which was previously known only from a single species in the Indian Ocean. Surprisingly, the new species were found in the Pacific Ocean, in southern Japan and on the Great Barrier Reef, Australia. The study was published in the open access journal ZooKeys. 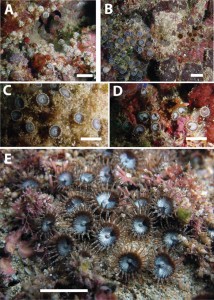 The field work behind the new species descriptions was done by associate professor James Davis Reimer and two graduate students from the University of the Ryukyus in Okinawa, Japan, and they say the disccoveries came from unexpected locations.

The only previous species of Neozoanthus was described in 1972 from Madagascar, and subsequently it was not seen for almost 40 years, until recent research had ascertained that new Pacific specimens likely belonged to Neozoanthus (Reimer et al. 2011, in the journal Marine Biology). The new study formally describes these new specimens as two species.

The members of this genus are small, with individual polyps no more than 6 mm in diameter, and have red, gray, blue or purple oral discs; all inhabit coral reef ecosystems in areas with strong currents and some siltation. Both new species and the species from Madagascar contain zooxanthellae that can provide them with energy from the sun.

“We were very surprised in 2008 to discover Neozoanthus in the Pacific, in Japan,” said Reimer, “and initially thought that perhaps these were very rare.” However, further research in southern Japan by graduate students Yuka Irei and Takuma Fujii, co-authors on the new paper, revealed that the Japanese species was locally common.

A further surprise came during the Census of Marine Life’s Census of Coral Reef Ecosystems (CReefs) surveys on the Great Barrier Reef in 2009 and 2010, when similar encrusting anemones were found thousands of kilometers away from both Madagascar and Japan. 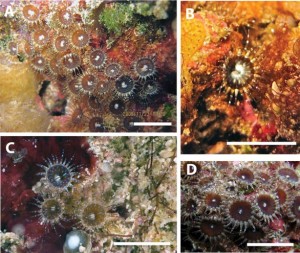 “These findings can be explained by the fact that there are very few zoanthid researchers in the world. These species are not particularly hard to find, but there was no one looking for them,” Reimer added. “This research demonstrates how little we know about marine biodiversity, even in regions relatively well researched.”