Acropora 911: Calling in the Clowns 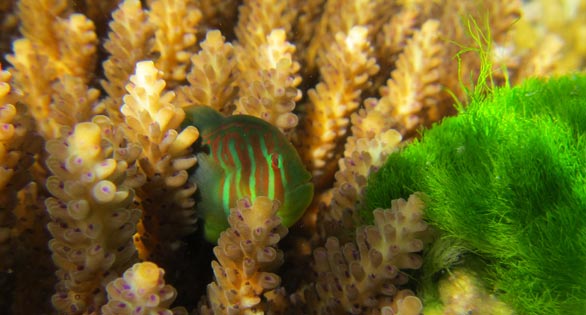 Broad-barred Goby, Gobiodon Histrio, in Acropora colony on reef in Fiji that is being invaded by macroalgae. Image: Danielle Dixon/NSF

Corals Attacked by Seaweed Use Chemical Signals to Summon Help

Corals under attack by toxic seaweed do what anyone might when threatened–they call for help.

Results reported in the journal Science show that threatened corals send signals to fish “bodyguards” that quickly respond to trim back noxious algae, which can kill the coral if not promptly removed.

Scientists at the Georgia Institute of Technology found evidence that these mutualistic fishes respond to chemical signals from the coral in a matter of minutes, like a 911 emergency call.

The inch-long Green Clown (or Coral) Gobies, Gobiodon histrio, spend their entire lives in the crevices of specific corals, receiving protection from their own predators while removing threats to the corals.

“These findings illustrate the complexity of coral reef systems,” said David Garrison, program director in the National Science Foundation’s Division of Ocean Sciences, which funded the research. “This newly discovered relationship may be a key factor in the resilience of some coral species”

According to the biologists, the symbiotic relationship between fish and the coral on which they live is the first known example of one species chemically signaling a consumer species to remove competitors.

It is similar to the symbiotic relationship between Acacia trees and mutualist ants, in which the ants receive food and shelter while protecting the trees from both competitors and consumers. 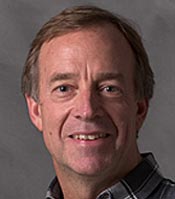 “This species of coral is recruiting inch-long bodyguards” said Prof. Mark Hay, right, a biologist at Georgia Tech and co-author of the paper. “There is a careful and nuanced dance of odors that makes all this happen.

“The fish have evolved to cue on the odor released into the water by the coral, and they very quickly take care of the problem”

The research was part of a long-term study of chemical signaling on Fiji Islanda coral reefs. It was aimed at understanding these threatened ecosystems and discovering chemicals that may be useful as pharmaceuticals.

The importance of large herbivorous fish to maintaining the health of coral reefs has been known for some time. They control the growth of seaweeds that damage coral. 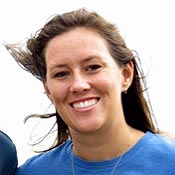 But Georgia Tech scientist Dr. Danielle Dixson, also a co-author of the paper, suspected that the role of the gobies might be more complicated.

To study that relationship, she and Hay set up a series of experiments to observe how the fish would respond when the coral that shelters them was threatened.

They studied Acropora nasuta, a species in a genus of coral important to reef ecosystems because it grows rapidly and provides much of the structure for reefs.

To threaten the coral, they moved filaments of Turtleweed, Chlorodesmis fastigiata, a species of macroalgae that is particularly chemically toxic to corals, into contact with the coral.

Within a few minutes of the seaweed touching the coral, two species of gobies–the Green or Broadbanded Clown Goby, Gobidon histrio and the Redhead Coral Goby, Paragobiodon enchinocephalus–moved toward the site of contact and began neatly trimming away the offending seaweed.

“These little fish would come out and mow the seaweed off so it didn’t touch the coral,” said Hay.

“This takes place very rapidly, which means it must be very important to both the coral and the fish. The coral releases a chemical and the fish respond right away.”

In corals occupied by the gobies, the amount of offending seaweed declined 30 percent over a three-day period, and the amount of damage to the coral declined by 70 to 80 percent.

Control corals that had no gobies living with them had no change in the amount of toxic seaweed and were badly damaged by it.

To determine what was attracting the fish, Dixson and Hay collected samples of water from several locations: near the seaweed itself where the seaweed was contacting coral and from coral that had been in contact with the seaweed 20 minutes after the seaweed was removed.

They released the samples near other corals that hosted gobies, which were attracted to the samples taken from the seaweed-coral contact area and the damaged coral, but not the seaweed by itself.

“We demonstrated that the coral is emitting some signal or cue that attracts the fish to remove the encroaching seaweed” Hay said. “The fish are not responding to the seaweed itself”

Similar waters collected from a different species of coral placed in contact with the seaweed did not attract the fish, suggesting they were only interested in removing seaweed from their host coral.

Finally, the researchers obtained the chemical extract of the toxic seaweed and placed it onto nylon filaments designed to simulate the mechanical effects of seaweed.

They also created simulated seaweed samples without the toxic extract.

When placed in contact with the coral, the fish were attracted to areas in which the chemical-containing mimic contacted the coral, but not to the area contacting the mimic without the chemical.

By studying the contents of the fish digestive systems, the researchers learned that one species–Gobion histrio— actually eats the noxious seaweed, while the Redhead Coral Goby apparently bites it off without eating it.

In the former, consuming the toxic seaweed makes the fish less attractive to predators, the authors believe.

“The fish are getting protection in a safe place to live and food from the coral” Hay said. “The coral gets a bodyguard in exchange for a small amount of food.

“It’s kind of like paying taxes in exchange for police protection.”

As a next step, Hay and Dixson plan to determine whether other species of corals and fish have similar symbiotic relationships.

The research was also supported by the National Institutes of Health and the Teasley Endowment at Georgia Tech.

The National Science Foundation (NSF) is an independent federal agency that supports fundamental research and education across all fields of science and engineering. In fiscal year (FY) 2012, its budget is $7.0 billion. NSF funds reach all 50 states through grants to nearly 2,000 colleges, universities and other institutions. Each year, NSF receives over 50,000 competitive requests for funding, and makes about 11,000 new funding awards. NSF also awards nearly $420 million in professional and service contracts yearly.