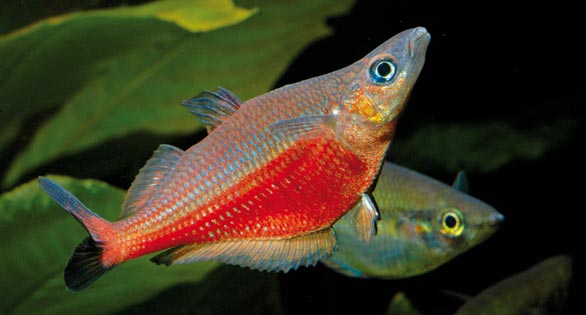 Web Special: Excerpt from the January/February 2013 Issue of AMAZONAS

This beautiful red rainbowfish was originally described as Rhombatractus sentaniensis by Weber in 1908 and assigned to the genus Chilatherina by Regan in 1914. In the 1990s a few specimens were imported frequently, but they were usually confused with Chilatherina fasciata from Lake Sentani.

In June 2011, at the annual general meeting of the IRG (Internationale Gesellschaft für Regenbogenfische/ International Rainbowfish Association), one of our Czech members was selling Chilatherina sentaniensis in the auction. No sooner had I entered the room than I acquired two bags of them. The fishes were already a good size, and thoughts of breeding them were foremost in my mind. 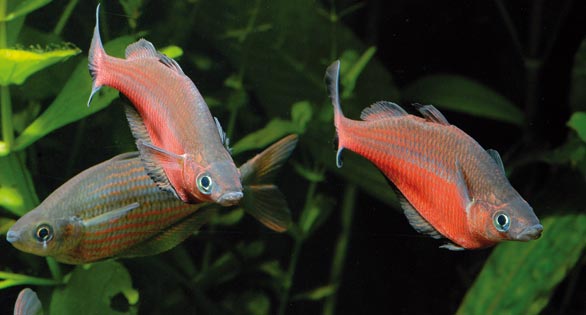 The species is peaceful. If two males meet they display briefly to one another, but there is no serious conflict.

The three days of the meeting flew by and we set off for home, accompanied by my friend Heinrich and his wife, who were to travel on to the Baltic next day. Once we were back home, though, there were long faces after we unpacked the fish. Almost all of them had pop-eye.

But the next morning,  we were greeted with a surprise. We saw gorgeous fishes radiating bright red all over their bodies, with a hint of pink and bold black edgings to the fins.There was no longer any trace of pop-eye! Had it been the long period of transportation or the pure oxygen I had put in the bags at the meeting? We had no idea—the main thing was, they were healthy. We both sat in front of the tank and celebrated like small children, even after several decades together in the aquarium hobby.

But were they really Chilatherina sentaniensis? In the past there had probably been confusion with Chilatherina fasciata from Lake Sentani (described in a report by Johannes Graf in the IRG journal in January 2010). So my neighbor Hans-Georg Evers took a few photos, one of which we sent to Graf for identification. He confirmed that we had the real thing. Now I was confident and content.

After several days of optimal maintenance with lots of pond food, the first woolen spawning mop was suspended in the tank. Eight to ten days later around 70–80 fry hatched. I was happy—the population was secured.

The water parameters in the breeding tank were around 12°dGH, pH 7.3–7.5, temperature 77°F (25°C). For the first few days the fry were fed with a protein-rich powdered food and pond water, as it was impossible to sieve out foods as fine as the fry required. After around five to seven days, we began to feed them freshly hatched Artemia nauplii, followed by sieved water fleas and Cyclops (fresh-caught), chopped frozen food, and now and then granulate as well. 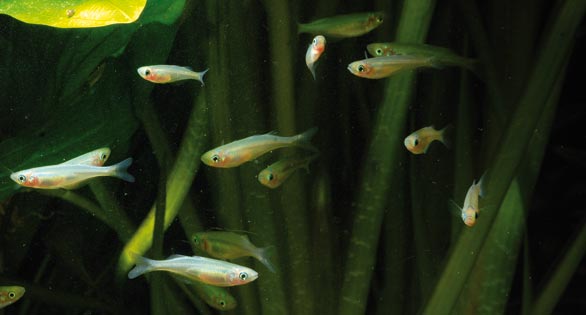 Group of youngsters around three months old. They don’t yet show any hint of the lovely coloration of their parents.

I normally use rather large tanks for rearing right from the start. Only thus do the young grow to an impressive size fairly quickly. In this case it was a 53-gallon (200-L) tank. The largest young were 1.5–2 inches (4–5 cm) long after four months. At this size some of them were starting to show a hint of pink or red on the body, especially after a water change. I was already dreaming of maintaining and observing a large shoal of these fishes in my 238-gallon (900-L) aquarium.

For the benefit of fans of sedately swimming fishes, it should be mentioned that Chilatherina generally swim around anything but sedately, and, indeed, sometimes rather chaotically. This could be termed an “unrounded” mode of swimming. By contrast, my Melanotaenia herbertaxelrodi and M. trifasciata now and then appear somewhat drowsy. Be that as it may, I can recommend these fishes. The special thing for me is the red all over the body, which is rarely seen.