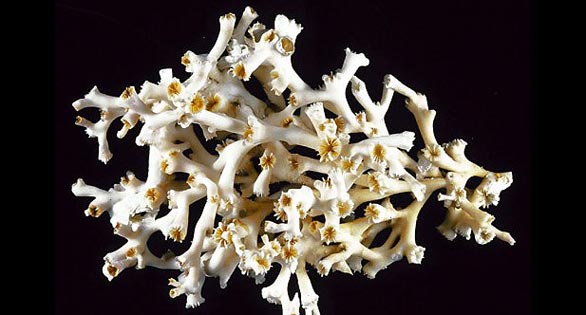 Lophelia pertusa, a stony coral that dominates many cold, deepwater areas, will be transplanted in an attempt to restore Sweden’s last remaining coral reef.

Devastated by deepwater trawling nets, Sweden’s Säcken reef in the Koster Fjord will likely disappear if corrective action is not taken, according to scientists at the University of Gothenburg.

Still healthy corals, some believed to be from genetic stock in excess of 6,200 years old, from nearby reefs in Norway are being removed and placed on the Säcken reef.

Tropical coral reefs are known for their rich biological diversity, but in Sweden, only one reef-building coral species exists, a cold-water coral called Lophelia pertusa.

Lophelia pertusa requires an environment with a constant high level of salinity and low water temperatures all year round. In Sweden, these conditions only exist in the northern part of Bohuslän, where deep water from the Atlantic is led in via the Norwegian Trench. The Säcken reef is located on Sweden’s west coast, near the Norwegian border, and at approximately the same latitude as Stockholm, Inverness, Scotland, and Juneau, Alaska.

“We’ve known since the mid-1920s that cold-water coral reefs exist here in Sweden,” says marine biologist and researcher Mikael Dahl. “At that time, corals could be found in three locations in the Koster Fjord. Today, only the Säcken reef remains, and it’s in poor condition.” 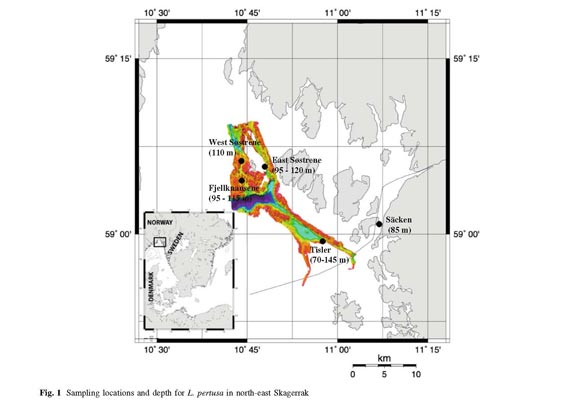 Location of the last Swedish coral reef and nearby Norwegian reef areas. Deepwater trawling for fish is now banned in these areas.

Some of the causes to this are the impact of trawling and increased sedimentation from eutrophication. Continuous observations with remotely operated vehicles (ROV:s) shows that the health of the reef slowly continues to decline.

“The red list assessment is currently in the ‘under immediate threat’ category. The Säcken reef has been protected against trawling for more than a decade, but trawling damage have been observed on the reef several times after the legislation was set in place”, says Mikael Dahl.

Three years ago, the protection of the reef was further strengthened when Sweden’s first national marine park, the Kosterhavet National Park, was created. However, the Säcken reef remains in poor condition.

Coral reefs are dependent on larvae from other reefs in order to recover naturally after they have been damaged, and the researchers have for a long time set their hopes on the settlement of larvae from the nearby coral reefs in Norwegian waters. However, a study recently published in the research journal Coral Reefs, shows that the Säcken reef is isolated from the other reefs in the northeast Skagerrak. 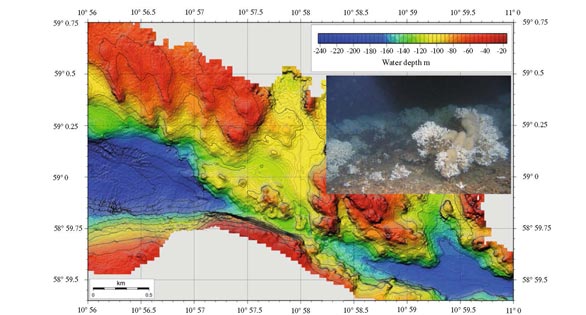 Bathymetric map of nearby Tisler reef in Norwegian waters generated from multibeam data. Reef is the dominant structure at the sill between the two basins. Photograph insert of Tisler reef illustrates the difficulty in distinguishing genetic individuals without molecular methods. The within-population demography is hidden by the identical appearance of different genetic individuals. The sponge Mycale lingua is commonly observed growing next to and competing with L. pertusa. Photograph by Tomas Lundalv.

By using genetic markers, researchers have estimated the degree of gene flow between the reefs in Skagerrak. The results show that the genetic distance between the Säcken reef and four other reefs in the northeast Skagerrak is one of the largest on both sides of the Atlantic. The genetic diversity on the Säcken reef is also much lower than observed in any other reef of this type.

“This means that it is highly unlikely that the Säcken reef will recover naturally,” says Mikael Dahl, who led the study. “Instead, interventions are needed in order to ensure the survival of the reef.”

Transplantation of Lophelia pertusa from Norway has been initiated. The researchers hope that these corals will survive the process of being transferred, and that they will be able to help with the re-establishment of the reef, through both asexual and sexual reproduction.

The Säcken reef is spread across an area of 5,000 m², but today there is only living coral in an area of around 300-500 m². Further results from the study show that individual specimens of Lophelia pertusa corals may be several thousands of years old, and in the Norwegian coral reefs some of the individuals have been estimated to be approximately 6,200 years old, with many probably older.

“In other words, it’s not only the reefs themselves that are extremely old, but it’s also actually the same individuals that have been situated there since soon after the withdrawal of the inland ice. These individual corals have been living there in the deep darkness since long before the Pharaohs built the pyramids”, says Mikael Dahl.

From materials released by the University of Gothenburg, 22 October 2012

Link to the article: