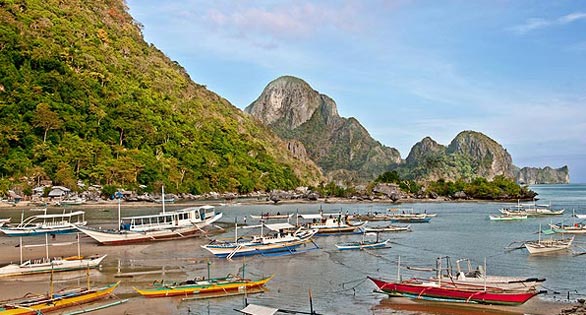 SEASMART is a brand that many in the marine aquarium realm may recognize, most notably for the EcoEZ & PNG National Fisheries Authority joint venture of SEASMART PNG, which attempted to design and establish a science-driven sustainable aquarium trade in Papua New Guinea (PNG).  Most aquarists more readily recognize SEASMART for bringing the Lightning Maroon Clownfish to the world’s stage.  It has been two years since the abrupt cessation of the SEASMART in PNG (see Lost in Papua New Guinea: The Inside Story of Seasmart’s Sudden Demise).

Less than two years later, the US-based EcoEZ team behind SEASMART PNG is back, pushing to bring the models and tools developed in PNG to the Philippines, ultimately to restart the concept and move into a real-world functioning model (which failed to happen due to premature cessation of the project in PNG), under the organization SeaSmart International. The EcoEZ team behind past efforts includes David Vosseler, a name well recognized in the aquarium industry given his involvement with SEASMART PNG as well as MAC (the Marine Aquarium Council).

Vosseler functions as the President of SeaSmart International, along with Judy Vosseler (David’s sister) as Secretary, and Bill Backus of A&M Aquatics.  A few open board positions are yet to be filled.  The new project, SEASMART Philippines, is already seeking private individual funding through an Indiegogo campaign, spearheaded by volunteer Alexandra Rose, an aquarist & diver helping to reinvigorate SEASMART after the premature end to the PNG pilot project.

Skeptics questioned how SEASMART could require a multi-million dollar budget in PNG to get things going, yet for this Philippines project, the need would be only $75,000 (the goal of the Indiegogo campaign).  Rose revealed that SEASMART Philippines has a much larger overall budget in mind – the team is actively pursing a US government agency grant for around 1 million USD. As Rose relayed, the $75,000 sought through the initial campaign (of which two 75K campaigns were planned) is basically jumpstart money to help fund the the initial stage of the project.  The team believes the money sought through Indiegogo will allow the program to be self sufficient until larger funding comes in. They expect slow but steady growth in expanding their network of SEASMART-trained FMAs (Fishery Management Areas). The larger funding will allow SEASMART to expand the network of FMAs rapidly and increase their export capacity.

Meanwhile, SEASMART Phillipines is already underway.  Members of SEASMART have already invested an undisclosed amount of personal finances to help get the ball rolling, and SEASMART Philippines has already completed the initial RRA (Rapid Resource Assessment) and produced a private, detailed 50-page report covering the Philippine project.  All the trainers in the SEASMART PNG team are also members of the current SEASMART Philippines team. They are already on the ground carrying out fisher training needs; profiling and preparing to get started with reef surveys, setting TACs, and jump starting training programs.

Rose conveyed that the choice of public funding mechanism websites was driven by a better fit (Indiegogo having an environmental category) as well as the flexible funding campaign model.  Unlike Kickstarter, where a goal must be met to receive any funds, the flexible funding of Indiegogo ensures that whatever funds are pledged will go to the project (so that if, for example, $70K of a $75K goal had been pledged, SEASMART would receive the $70K pledged vs. recieving nothing in Kickstarter).

With roughly a week left in the campaign, only $5,005 has been pledged of a $75,000 goal. While this is less than the team had hoped, Rose remains optimistic about the overall long term plans for SEASMART Philippines. SEASMART stated that if the campaign closes far short of its goal, work will still be done on the ground, just not to the scale or extent they had hoped to accomplish in advance of the bulk of funding they hope to secure from donors.  Should US government agency funding fall short, they are able to reapply, although Rose and the team are also working on secondary funding sources to help ensure that the program can move forward.

The SEASMART team chose to center their Phase 2 project in the vicinity of Davao in the south of the Philippines; as explained by Rose there is little if any marine aquarium collection occurring in this region of the Philippines, allowing for the implementation of the SEASMART models and methodologies on what is hopefully relatively higher quality, intact reefs.  Members of the SEASMART team are currently discussing the project with local government as well to ensure that they are indeed wanted and welcome in the region. Rose relays that local support has been very strong to date.

The main goal of the initial project phase is to implement the management practices while training divers, after which the second component is to develop the SEASTRONG aspect of the project – the actual collections and export business that will bring actual sustainably harvested marine aquarium fish to the aquarium industry.  The MAR component of the program (Mariculture, Aquaculture and Restoration) will begin in the first phase and grow in earnest in Phase 2; MAR is perhaps the part that Rose is personally most excited for. MAR is primarily carried out by women and families and is a component unique to the SEASMART program.

SEASMART acknowledges that trying to recreate the PNG model in the Philippines also allows the team to reexamine some of the criticisms levied against the original PNG model. One project concern raised by past critics was the restriction to free-diving (snorkle and fins) only in PNG; critics felt this limited collectors to only a handful of species that were already abundant in the trade for arguably far less cost than what a sustainably collected fish might require.  Rose, herself one certification away from being a full-fledged PADI Instructor capable of conducting scuba certifications, relayed that unlike PNG, collectors in the Philippines may in fact already be scuba certified.  Overall, scuba is more accessible in the Philippines and the barriers present to scuba in PNG may not be the same.  As such, collecting with scuba is “on the table for discussion” in SEASMART Philippines. 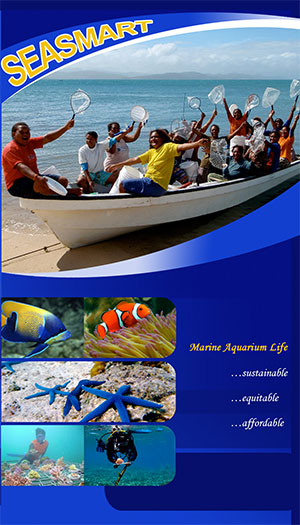 Rose also emphasized the importance of implementing the SEASMART program in the Philippines due to its contentious past and present reputation for a  “high incidence of cyanide fishing.”  The implied goal is to prove that a sustainable model can be put in place, and function, even in the face of a larger entrenched, problematic way of doing business.

Ultimately, Rose characterized the program as “A fresh start.  People are excited to have SEASMART there.”  Rose, still functioning in a 100% voluntary capacity as the current spokesperson for SEASMART, is planned to be brought on board as part of the field team in the Philippines when the time comes.  Ultimately, the team behind SEASMART remains devoted to the ideal of transforming “the marine aquarium trade into the world’s best tool for coral reef conservation and sustainable economic development.”

Of course, the complexities of trying to re-establish SEASMART don’t go unnoticed by some aquarists and industry insiders. Given the history, there is undeniably a  “once bitten twice shy” sentiment around the SEASMART brand, and skepticism continues. Unusual and complex business arrangements may be to blame—for example this disclosure from the Indiegogo campaign – “If you decide to contribute and you do it via PayPal, you will see that you’ll be transferred to the site of a sister organization, Panda Mountain (they love corals too!). Rest assured that your funds will be going to us at SEASMART…”

Vosseler explains this arrangement; “If people contribute via the Paypal option on Indiegogo, we have immediate access to the funds. This is useful to keep the folks in the field working steadily.”  Vosseler went on to say that “Panda Mountain [is helping facilitate paypal donations] because we need our organization to be a 501(c)3 to be able to open an account with PayPal and receive contributions. As it stands, since EcoEZ is a for profit and SeaSmart International does not have 501(c)3 registration yet, we had to take this different route.”

To paraphrase, according to Vosseler, Panda Mountain, a 501(c)3, taking your donations and then paying the net received to SeaSmart International to do the work. It should be noted that Vosseler freely dicloses that he is “on the USCEF/[Panda Mountain] Board”, and he feels that “there is absolutely no concerns with this relationship and the delivery of funds.”

While skeptics may dwell on SEASMART’s past and are hesitant to give SEASMART a “second chance”, the SeaSmart International team is anxious to put to use in the Philippines what they learned from the PNG pilot program and from their years of experience with MAC and earlier, ultimately building a better marine aquarium trade in the Philippines.

With the evolution of the SEASMART brand methodologies it represents, Rose cites the older EcoEZ / SEASMART PNG websites as good background information on the concepts of SEASMART, but emphasized that the most current information can be found at the SEASMART Indiegogo Project Page.