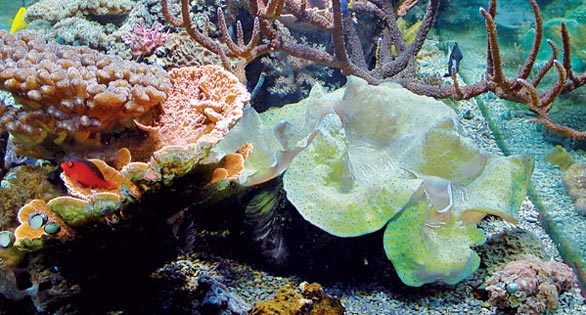 The author’s Tridacna gigas in 2001, after two decades in his aquariums; at that time the shell measured around 21½ inches (55 cm) in length.

Farewell to a friend of 30 years

I didn’t hesitate, it was only 29.80 DM (approximately $55 at the time), and so the Giant Clam (Tridacna gigas) changed owners and found its way into my invertebrate aquarium – again under T8 lighting.

Over the decades that followed this giant clam proved to be very robust, as it survived several episodes of maltreatment. High phosphate concentrations, for example, with values of 1.9 mg/l, which affected my small-polyp stony corals badly, though there was no sign of any ill-effects on the clam. 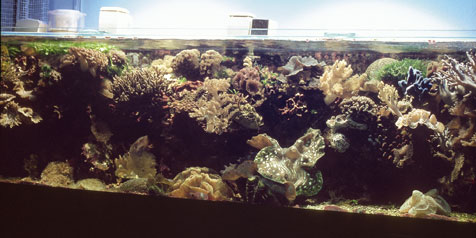 The giant clam aquarium a few years circa 1990. Front right is the almost full-grown Fluted Clam (Tridacna squamosa) that died a few years later after a spawning event.

Then there was the biting and nipping by all sorts of species of coral fishes, in particular a Copperband Butterflyfish (Chelmon rostratus), which after some years of captive maintenance suddenly turned its attention to my large-polyp stony corals and my giant clams, and hence had to be removed the aquarium. Likewise a pair of Flame Angelfishes (Centropyge loriculus), the female of which found my bivalves – not to mention all Seriatopora and Pocillopora species – good to eat. The endless pecking resulted in the bivalves not opening any more and two Tridacna crocea even died.

The giant clam aquarium a few years  circa 1990. Front right is the almost full-grown Fluted Clam (Tridacna squamosa) that died a few years later after a spawning event.

Astonishingly, my Yellow Tang (Zebrasoma flavescens) was by contrast allowed to constantly “graze” on the lobes of the mantle, which were only rarely partially withdrawn in response. And then there was the pair of Springer’s Dottybacks (Pseudochromis springeri) that lived in the interior of the clam, apparently without bothering it in any way at all. It was actually very nice to watch the dottybacks swimming in and out of the inlet opening. By then – in the 1990s – the clam had already grown to a shell length of about 16 inches (40 cm). 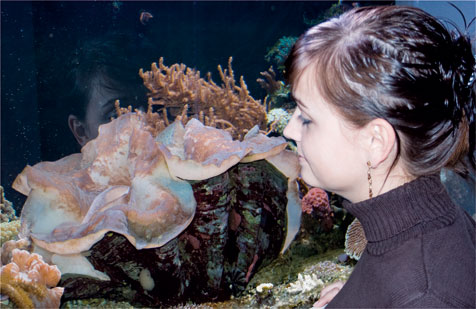 Author’s daughter with the Giant Clam in April 2008, shortly after its transfer to a new and uncrowded aquarium – as clearly evidenced by the still sparse growth of corals. The large bleached-out areas can be attributed to the fact that the bivalve has shaded itself due to its form and the static source of light; this had also happened several times in the past but had always been followed by complete regeneration.

It has been moved seven times in total, and survived them all unscathed. In 1987 it was moved to its first aquarium with HQI lighting, 2 x 250-watt “Daylight”. This tank was already home to a full-grown Fluted Clam (Tridacna squamosa), which died about eight years later after a spawning event.

During the first moves the clam was still fairly easy to handle, apart from the fact that it vigorously defended itself by slamming its shell shut and squirting out a jet of water. But in the course of time moving it became more difficult, and I contemplated the last three moves with mixed feelings. First of all I had to move – for professional reasons – from Mülheim in the Ruhr to Ulm, a distance of around 310 miles (500 km). I can still remember the precise details of this saga: it took place on a Sunday in August, and at 86 °F (30 °C) the temperature was practically tropical.

By now the clam had attained a shell length of about 21½ inches (55 cm), and lifting such a large specimen out of the aquarium was no longer a simple matter. Nor was finding a suitable container for its transportation. The plan was to fill a plastic animal watering tub with sea water and put the clam in it diagonally. Unfortunately the clam proved too large. But by then there was no going back – so into the plastic tub it had to go. One end of the clam protruded significantly out of the water and had to be covered with a cloth soaked in sea water.

So, off we went down the autobahn, hoping that there would be no traffic jams and also that we wouldn’t have to brake hard at any point. Around five hours later we arrived in Ulm. No time for slow equalization of water parameters – a third of the clam was by now high and dry, so into the new tank it went along with the other mollusks, and fingers crossed. To cut a long story short – everything turned out OK. The T. gigas opened and closed jerkily a few times, and then it was all over, and the clam displayed its full splendor.

Author’s daughter with the Giant Clam in April 2008, shortly after its transfer to a new and uncrowded aquarium – as clearly evidenced by the still sparse growth of corals. The large bleached-out areas can be attributed to the fact that the bivalve has shaded itself due to its form and the static source of light; this had also happened several times in the past but had always been followed by complete regeneration.

The last two moves, in year 2007, were the most difficult, as by now the clam had attained a shell length of around 28 inches (70 cm). The reason for these moves was that the bottom-rear silicone-sealant joint of the aquarium was no longer water-tight, and water was dripping out. There was only one solution – the aquarium would have to be emptied completely.

Have you ever tried to transport a giant clam of that size? It was possible only with the help of other aquarists, whom I would like to heartily thank again here for their rallying round to help. The clam went off to a substitute aquarium only a few minutes away from our home, and a new tank had to be acquired and set up. Some weeks later the enormous mollusk eventually came back to occupy its new home.

By now it was 2009, and this story was already heading for its tragic end. Over the space of about a year white spots had appeared in various places on the lobes of the mantle, some of them with a diameter of around 2 inches (5 cm). Apparently the symbiotic algae had died off in these areas. In fact the spread of the spots had halted in the course of time, and the white patches had regained some of their color, but the clam never again exhibited its former intense and attractive coloration in these areas.

Then, in the summer of that year, I had to go on business to China for three weeks, and when I returned the clam had become noticeably paler all over. This was at the end of July 2009. Water tests showed slightly elevated concentrations of nutrients, but this couldn’t be the reason for the bleaching as the far more sensitive stony corals were perfectly OK, and on the basis of my previous experiences these reacted considerably more rapidly than the clam to any deterioration in environmental conditions. 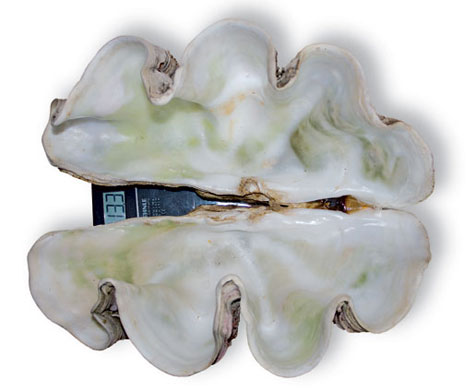 I started making larger partial water changes, on the assumption that perhaps one trace element or another was lacking – a fairly reasonable hypothesis as the “colossus” had been living for years in less than 265 gallons (1,000 L) of water. 2½-5 gallons (10–20 L) of water were changed every day. The stony corals rewarded me with improved colors and more rapid growth, but the giant clam continued to degenerate. On the 7th and 8th August 2009 it started to curl the lobes of its mantle inwards in two places, and I recognized this as a clear sign that it was going to die. This curling inward continued, interrupted by occasional days when the clam again opened fully and gave me a bit of hope. But on the 28th August it finally showed no signs of life and had to be removed from the aquarium.

The reasons for its demise remain unclear. Naturally I investigated the corpse as well as I was able, but, layman as I am when it comes to the anatomy and physiology of giant clams, I was unable to discover any deviations from the norm. Nor did I find any parasites. Perhaps it was simply death due to natural causes. I had, after all, been maintaining this clam for 30 years. 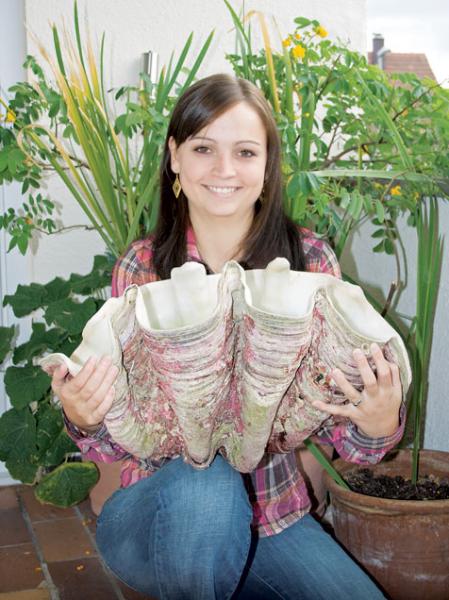 The shell of the largest-known Tridacna ever grown in a home aquarium displayed by the author’s daughter.

On page 213 of the new (2009) edition of his excellent Giant Clams book, Riesenmuscheln – Arten und Pflege im Aquarium, Daniel Knop refers as follows (translated) to the world’s oldest aquarium-maintained giant clam: “That belonging to the author of these lines has lived in the aquarium for 29 years, measures 24 inches (61 cm) in shell length, and is thus, as far as I know, the oldest aquarium-maintained giant clam in the world; followed by a T. gigas specimen in the Waikiki Aquarium in Hawaii, which arrived there in 1982 at a shell length of 4 inches (10 cm) and likewise still remains in good condition.”

However, in the latter case it should be borne in mind that the Waikiki Aquarium illuminates its tanks in part via sunlight and has a semi-open system whereby a small amount of natural sea water, from a source near the coast, is constantly passed through the aquarium. In such a system, with all necessary minerals supplied, a clam will, of course, do better than in a completely closed marine aquarium system.

Would that I could have improved these record figures further.

Charles Delbeek, a former aquarist at the Waikiki Aquarium, made this comment:

I just read Dieter’s article on his clam, and, for the record: the one in Waikiki has been kept in a closed system since 2002. There is also a second one that arrived a year later in 1983 but was less than a year old when we got it. It was from one of the first batches ever reared in captivity by Gerry Heslinga at that time.

Both those clams are much larger than Dieter’s, both are over 3 ft. The old one is now 32 years old and the smaller is 27.

Dr. Bruce Carlson documents the history of the Waikiki Aquarium’s Tridacna gigas clams in the November/December 2012 issue of CORAL.