In designing the renovation of the aquarium where I’m curator, we’ve had a couple of years to perform various “bench testing” of lights, filters and other equipment to better assess their application for use in the new facility. Since these tests were performed in addition to our regular duties, and with a budget pretty close to zero, they are not necessarily comprehensive, and were really designed to answer specific questions we had abut particular products.

One product that we needed to test was the Hydrowizard from Germany. The North American distributor is: http://www.belowwater.com/category/pump/ We requested a loan of one of these pumps, and it was at our facility in a few weeks. The durability of this pump is extrapolated from the fact that this particular pump had been shipped around to many public aquariums throughout North America; run through many different exercises under a variety of conditions – probably mishandled quite a bit, yet still functioned as designed.

The unit arrived from the last person it was loaned to with the mounting apparatus missing, so I fabricated a mount out of spare wood: 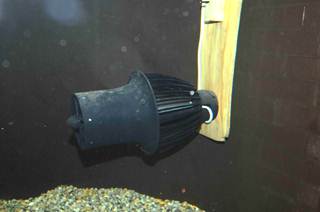 Hydrowizard mounted on wood for testing.

Initially, the unit was installed widthwise in an 18,000 gallon reservoir, which is roughly 18’ wide by about 45’ long.  I took readings at 5” from the pump output, directly behind the pump and then 16’ across the reservoir: 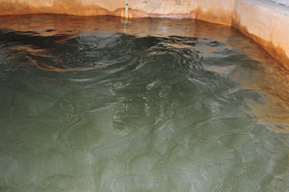 I used a Flowatch meter to take measurements.   Operationally, these flow measurements were difficult to make because at higher power settings, water flow would reflect off the sides of the reservoir.  For example, the 16’ readings tapered off above 70%  power because water was forcefully hitting the side of the reservoir and reflecting back into the oncoming water, slowing it down.  Additionally, at the 5” distance, measurements could not be taken above 70% power because the flow meter wand began to bend.  The 80-100% measurements were extrapolated. 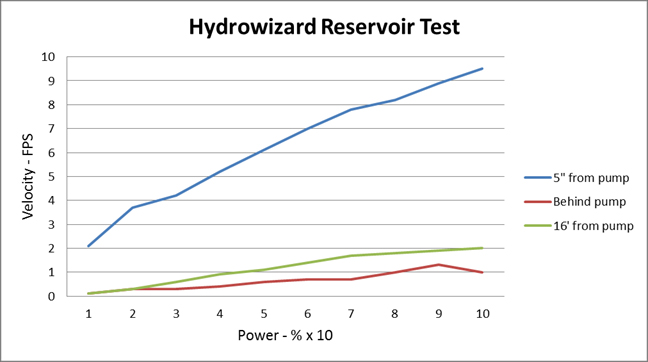 The Hydrowizard literature states that it pumps at 833 gpm and uses 348 watts.  The stated maximum flow rate is 11 fps and the flow rate on the intake screen is 3 fps.  At 5” from the pump, we calculated a rate of 9.5 fps and we measured rates of about 1.3 fps on the intake side of the pump (this is important to know because you don’t want that value so high that fish get trapped against the screen).  It is probable that the velocity of the water at the impeller is the stated 11 fps, since it was difficult to actually measure these higher rates.   The diameter of the pump output tube is 5.5”.  At 11 fps, that means it moves 3137 cubic inches of water per second, or 814 gallons per minute.  This is very close to the value given in the literature.   Even at our estimated 9.5 fps rate the flow would be 703 gpm, still close to the rated value.  Using this value, at 16’ from the pump, the diameter of the cone of moving water would be about 7.5 feet – which is about what was observed.

We could not get a wave produced while the Hydrowizard was mounted horizontally in the basement reservoir – probably because we had to work towards one end of it – so any developing wave would dissipate towards the open part of the reservoir, while the closer wall tended to cause drag on the wave’s motion.  We were able to produce “confused seas” with differing sized waves, moving in different directions.

We then moved the Hydrowizard to an exhibit aquarium which is roughly 14’ long, 4’ tall and 4’ wide.  We were able to get a wave produced in that tank fairly easily.  With some additional adjustments, we’re confident that we could make an even larger wave, but as the one we did create required us to lower the tank water level to keep water from sloshing out, we felt it was sufficient:

In tank videos of the Hydrowizard:

Video from top of tank:

Video with artificial kelp in place:

Note:  this is 20 year old plastic kelp, and  not a supple as new kelp would be.  Still, the Hydrowizard moved it around pretty well.

Waves were easier to produce when the Hydrowizard was mounted vertical and weighted to a platform at the bottom of the reservoir:

1)  The pump performs as described in the literature.

2)  It was easy to use, lightweight and durable.  The menu system for the computer control took a bit of time to learn, but was fairly straightforward after that.  It turns out that the model we were using is an early prototype – the software menus system has been improved in later units.

3)  The pump stirs up a LOT of detritus – which may in the long run help with tank cleaning, but for the short term, really clouded up the tanks.

4)  We plan to incorporate these devices into the design of our new aquarium, as well as a planned penguin exhibit.