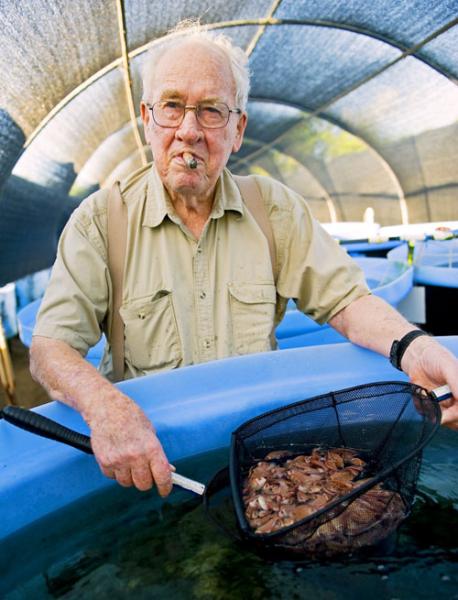 “Fishes would see him and spawn”

By Matt Pedersen & The Staff of CORAL

It was the evening of February 17th, when we received word from long-time fish breeder and friend Joe Lichtenbert.

“Some very sad news,” wrote Lichtenbert, “Bill passed away in his sleep last night….Although Bill suffered from diabetes requiring daily injections, pretty bad arthritis, and macular degeneration, he NEVER complained. His famous words of wisdom were, ‘So be it!’.

Bill was a WWII vet. His personal exploits would make you proud to be an American.  The family is not planning any of the normal services. Instead, he will be cremated and his ashes will be spread across the mountain passes in his home state of Wyoming that he so loved. I, and the world, have lost a great and inspirational man.”

William Middleton Addison’s obituary was published on February 22nd in the Wheatland, Wyoming Record-Times and gives us insights beyond the man that was known in the aquarium world as Bill Addison, pioneering marine fish breeder and founder of C-Quest Hatchery.

In his 85 years of life, Addison accomplished and saw more than most, and as Matthew L. Wittenrich retells it: “He dug his first uranium mine by hand, amassed a collection of antique cars, set up a tropical fruit plantation in Central America and a fish hatchery in Puerto Rico.”

Indeed, Addision served in World War II as a Marine, returning afterwards to graduate high school, attend college, and married his wife Arline in 1952. Addison mined uranium and later white marble in Wyoming. Ultimately Addison sold the mining business to pursue the aforementioned interests, including the C-Quest Hatchery in Puerto Rico which was moved to Wyoming in 2010, as reported in Reefbuilders.

C-Quest is the oldest operating marine ornamental fish hatchery in the country, starting in 1988. In 1997, Joyce Wilkerson wrote an extensive look at the C-Quest facility in Puerto Rico. The author of Clownfishes (Microcosm, 1998), Wilkerson worked with Bill Addison for a number of years before her death in 2007.

It is interesting to note Wilkerson’s concern over the loss of several hatcheries in the late 90’s, leaving only C-Quest and Joe Lichtenbert’s Reef Propagations Inc. producing captive-bred marine fish for the aquarium industry at that time and fighting an uphill battle for profitability that seems to rage on today.

Lichtenbert retired in 2010, leaving only C-Quest still standing from that early era. C-Quest continues even today, continually extending the longevity record for a commercial marine ornamental hatchery, now under the leadership of Addison’s daughter, Katy. 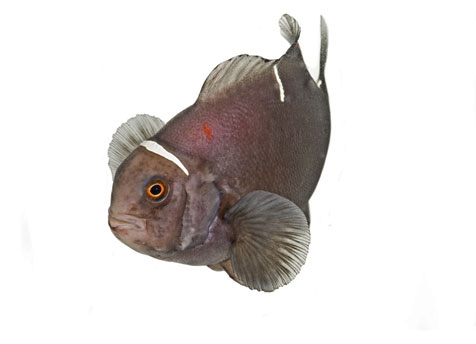 “Bill’s Black Beauty Maroon,” one of many unusual anemonefishes kept by Addison at C-Quest.

Martin Moe, author of The Marine Aquarium Handbook: Beginner to Breeder, recalled the time some 15 years back when asked about Addison’s passing and the impact he had.

“I have known Bill Addison for many years. We had much in common, both in world outlook and marine fish culture interests. We met and spent time together at many conferences and often talked on the phone. Bill wasn’t one for email, he preferred a more direct form of communication.

I dedicated my book, Breeding the Orchid Dottyback to him and Arline:

‘To Bill and Arline Addison, with thanks for keeping the dream alive.’ There was time in the 1990s when ornamental marine fish culture was not the vibrant activity that it is today. New species were not in development and tank bred fish were on an uphill economic battle with wild caught fish. Some of this remains today, but tank-reared fish are now playing with a much better poker hand (Bill loved a good game of poker).

My dedication was stimulated by the wonderful job Bill and Arline did with the establishment and support of C-Quest, which helped greatly in the development of a market for tank-reared marine fish and in the understanding of the importance of this endeavor.”

‘To Bill and Arline Addison, with thanks for keeping the dream alive.’ There was time in the 1990s when ornamental marine fish culture was not the vibrant activity that it is today. New species were not in development and tank bred fish were on an uphill economic battle with wild caught fish. Some of this remains today, but tank-reared fish are now playing with a much better poker hand (Bill loved a good game of poker).

My dedication was stimulated by the wonderful job Bill and Arline did with the establishment and support of C-Quest, which helped greatly in the development of a market for tank-reared marine fish and in the understanding of the importance of this endeavor.”

When we call Bill Addison a pioneering marine fish breeder, we must point out that he was the third person recognized as a MASNA Aquarist of the Year [as of 2018, now known as the MASNA Award – Ed.], in 1997. It’s interesting to note that Bill was only preceded by fellow Aquarists of the Year Martin Moe (1995), and Thomas Frakes (1996), both talented and pioneering breeders cut from the same cloth in the same pioneering era. However, we ought never to judge a man simply by the stature of his peers, but through the words of those who knew him best.

Matt Wittenrich: “He was sharp as a tack”

Wittenrich, author of The Complete Illustrated Guide to Marine Aquarium Fishes, says he was truly fortunate to have met Addison several years ago in Puerto Rico.

Wittenrich recalls that “From the very beginning I respected him. I had known of his pursuits and accomplishments from many years of childhood admiration, but got to know the real Bill spending time with him and Arline at their home in Wyoming. Bill was a man to be admired….He loved his family, loved his wife, and loved life. He was sharp as a tack, remembering spawning records of fish spawned in his hatchery in 1992.”

Jeff Turner: “Many people learned from him.”

“With Bill leaving the planet physically, we have lost a tremendous wealth of marine fish knowledge and a guy that certainly owned the knack of marine fish breeding. Many people learned from him and also taught Bill a thing or two. Todd Gardner, Matt Wittenrich, Martin Moe, Frank Hoff, Joyce Willkerson, Paul Schlicht, Dave Palmer, myself and so many others respected Bill’s opinion, and I think all of us were fond of the fact that Bill could do whatever it was that Bill was going to do.

Bill would want us to press forward with marine ornamental fish breeding and to keep the lines of communication open between ourselves so that more discoveries are made and more species are cracked.”

Edgar Diaz: “Fishes would see him and spawn”

One of the many others Turner alludes to is Edgar Diaz. Diaz is the proprietor of Addy-Zone Hatcheries in Michigan, and got his start breeding marine fish under Addison at C-Quest. Diaz remembered that “Bill was the greatest of them all, the master. Fishes would see him and spawn.

He was a great boss, firm but fair. He believed in what he did and never gave up. He is the person I admire most. The best thing I learned from him was not about fish – don’t mess around and don’t let people mess with you. Then raise fish.”

And raise fish C-Quest did.

At one time C-Quest employed some 20 people and maintained over 550 broodstock pairs. C-Quest has been a driving force for breeding innovation throughout its history. If you admire the many Red Sea Dottybacks that are available today almost exclusively as affordable captive bred fish, you owe a debt of gratitude to Addison and his crew.

The vast majority of “Onyx Perculas” from captive-bred lines today are descendents of the “C-Quest Line,” the name for the phenotype being coined by Addison himself and shares a distinct breeding history when compared to “Onyx” Perculas caught in the wild – Addison was fortunate enough to recall the story of the Onyx Percula in 2007. Beyond the Onyx Percula, C-Quest is also known for originating the Ocellaris counterpart of a “Platinum Percula,” the harder-to-find and arguably slightly more stunning “Wyoming White” Ocellaris.

His success in the marine breeding world as a pioneer will never be forgotten and his legacy lives on in one of the longest lineages of captive clownfish,” wrote Wittenrich, now with the University of Florida’s Tropical Aquaculture Lab. “The Onyx clownfish was named after the black onyx stone he mined in Wyoming. The Wyoming White was named after the white marble he mined there too.

Bill has influenced the lives of many and I feel honored to have known him. The stories I learned from Bill could fill a book. One of my favorite memories of Bill was the moment I snapped his portrait. He was happy, doing what he loved,” said Witterich.

Indeed, Jeff Turner’s memories conjure a vision of Addision truly being a die-hard aquarist of the most indulgent kind. “Bill loved the communication/camaraderie with all of the fish people who would gravitate towards Bill as the center of the ornamental marine fish breeding universe” wrote Turner.

While C-Quest certainly is a business, Turner’s take was that “[Bill] never really worried about the money he was spending on his ‘hobby’, or hobbies- the fruit farm in Roatan, and the vast collection of old cars he would restore, and the marine ornamental fish farm in Puerto Rico. After 15 years…I realized that he was not in it for the money. He loved it and liked the discussion with guys like us.”

Leave it to Martin Moe to sum it up perfectly. “Bill was businessman as well as a hobbyist and innovator. A new species was a challenge to him and a successful rearing brought him great satisfaction. It is difficult to say goodbye.”