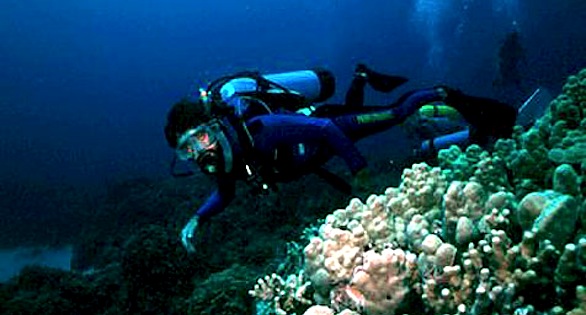 Washington State University marine ecologist Brian Tissot, seen here surveying a coral reef, is lead author of a paper in Marine Policy asserting that US reforms can make the trade in corals and their fish more responsible, ecologically sustainable and humane.

VANCOUVER, Wash. International law has failed to protect coral reefs and tropical fish from being decimated by a growing collectors market, but U.S. reforms can lead the way towards making the trade more responsible, ecologically sustainable and humane.

“Our actions have a big impact on what happens in these coral reef ecosystems, which are already hit hard by other forces like global warming, ocean acidification and overfishing,” said Tissot, lead author and professor of Earth and Environmental Sciences at WSU Vancouver.

Using data from the United Nation’s conservation monitoring program, the authors say trade in coral and coral reef species is substantial and growing, removing 30 million fish and 1.5 million live stony corals a year. The aquarium industry alone targets some 1,500 species of reef fishes. Many die in transit, leading collectors to gather even more animals to compensate for their losses.

The result is some species have gone “virtually extinct,” said Tissot. The Banggai Cardinalfish (Pterapogon kauderni), which is unique to a remote Indonesian archipelago, has had its numbers reduced and even eliminated through much of its range after it became a popular aquarium fish in the late 1990s, according to Tissot et al.

The Marine Policy paper grows out of a meeting of more than 40 scientists, NGOs and policy experts during the 2009 International Marine Conservation Congress. Their concerns grew even more pressing after the Convention on International Trade in Endangered Species, or CITES, did not take action on bluefin tuna or key groups of corals this past March.

With U.S. buyers accounting for more than half the trade in live coral, reef fish and invertebrates, the authors recommend leveraging U.S. market power to reduce the trade’s environmental effects. They suggest laws to protect a wider variety of species, better enforcement that includes tracking a product’s chain of custody, and reforms in source countries. They also recommend changes in marketing to promote sales of species certified as being humane and sustainable.

“The U.S.,” say the authors, “should assume its role as an international leader in coral reef conservation and take steps to reform the international trade it drives.”

As the world’s largest importer of marine ornamental species for the aquaria, curio, home decor, and jewelry industries, the United States has an opportunity to leverage its considerable market power to promote more sustainable trade and reduce the effects of ornamental trade stress on coral reefs worldwide.

Evidence indicates that collection of some coral reef animals for these trades has caused virtual elimination of local populations, major changes in age structure,and promotion of collection Practices that destroy reef habitats.

This is particularly important in light of the March 2010 failure of the parties to the Convention on International Trade in Endangered Species (CITES) to take action on key groups of corals.

From Materials Released by the University of Washington.
Images: John Coney