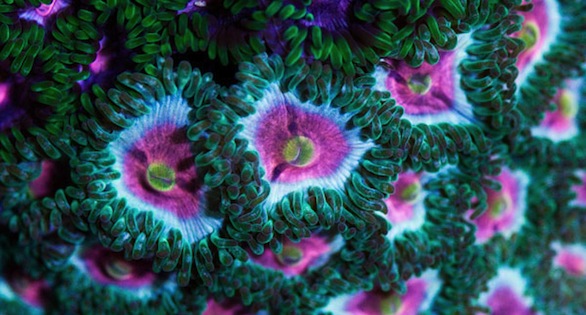 “Royal Flush” Zoanthus sociatus, collected and propagated by the author.

To Whom it May Concern,

I am a home-based coral aquaculturist writing to submit my misgivings about the proposed ESA listing of 82 species of coral.  I have been growing and propagating corals in my home for 11 years. I pursue this hobby as an engaging educational activity that has provided me with a much more comprehensive understanding of coral reef ecology.  Through a social network of other aquaculturists, I am growing, selling, and trading dozens of aquacultured coral species with my fellow coral growers in order to increase my coral aquaculture program.

My concern is that by listing any species of corals as endangered, our otherwise scientifically-rewarding hobby will be made criminal, and further advancements in coral aquaculture and understanding will come to a halt. I am but one of many thousands of coral aquaculturists in the US that are enthusiastically engaged in this activity. Over the past 20 years, the secrets of coral husbandry have been unraveled. What scientists once considered impossible (keeping corals alive in an aquarium) is now commonplace. Groundbreaking discoveries by home aquarists, and technological advances in lighting and filtration from the private sector have paved the way for public aquariums and universities to follow in our footsteps. This proposed legislation has the potential to end new innovations in live coral science and aquaculture research.

It should be considered by the NMFS that stony coral population structure and reproduction is different from most other animals that are ESA listed.  The primary mode of reproduction is via asexual reproduction of individual coral polyps that create colonies of clones. Population size and structure across the world’s oceans is nearly impossible to determine with any accuracy for ESA standards, and corals are furthermore not restricted to coral reefs, colonizing any suitable substrate where chemical and physical conditions allow them to survive. Coral aquaculturists like myself propagate these clones via asexual fragmentation to form new colonies in multiple aquariums around the world. Corals are quite literally capable of perpetual life through this constant cloning.

A major hindrance to the proposed legislation is that it singles out species that can look indistinguishable from other species in the same genus without expert microscopic or post-mortem examination.  Few scientists, let alone FWS inspectors, will have this level of expertise to determine one species from another. Species of Acropora, Montipora, and Porites are some of the fastest growing and most abundant corals on the reef, and are popularly cultured here in the US.

Plasticity in morphology and hybridization often makes precise determination of species impossible. By ESA listing any coral species, the US government may inadvertently restrict or prohibit an otherwise legal commercial activity of culturing other coral species.  Honest mistakes in the identity of the corals that we cultivate may result in extraordinary fines or incarceration. Furthermore, ESA listed corals that have been in cultivation for many years will suddenly become legal ‘white elephants’ in our aquariums.  There are likely tens of thousands of aquacultured colonies of these corals happily growing in the US at this time.  Simple fear of prosecution will damage the advancement of coral science and aquaculture, even of those species that will remain unlisted.

Already, all stony corals in US and territorial waters are protected from harassment and harvest. Extensive marine protected areas (MPA’s) and restrictions on coastal development are already well established in these places. The level of unintended consequences from the listing of these coral species does not justify the benefits of listing.  Sovereign, developing nations that are dependent on their coral reefs for subsistence have the most to lose, as it will eliminate one of the most sustainable fisheries they have to provide them with income. Lagoon-based coral aquaculture provides these countries with an economic reward to protect and manage their coral reef resources.  It is this type of incentive that promotes real coral reef preservation in these countries.

Without offering any concrete conservation and recovery plan for each and every one of these species, ESA listing will only serve to hinder commerce, scientific understanding, and the general public’s connection with the coral reef.  Coral reef conservation, which I support whole-heartedly, is best achieved through education, outreach, and economic incentives for tropical marine countries. I also suggest that the US government make more funding available to coral biology and aquaculture research. The additional level of protection afforded by the ESA will have minimal positive impacts on these species in the wild, beyond those measures that are already in place. Rather, it will inflict severe economic damage to those of us (both in the US and abroad) who make some or all of our living from the aquaculture of these inspiring organisms.

To reiterate, I DO NOT think that there is enough evidence to support the listing of these 82 coral species to the endangered species list.