I have been active in various hobbyist forums since I was a Sysop for Compuserve’s FISHNET back in the mid-1980’s.  While my posts from that era have evaporated into the ether, some of my more recent posts, (aside from hopefully being more accurate than 25 years ago) are still retrievable.  I extracted some text from them and saw a lot of repeated information – meaning that as new people move into the hobby, they have many of the same questions.  The following are my thoughts on a few of these topics:

Actually, this isn’t a rare disease at all, it is just difficult to isolate in culture, and most fish don’t die from it until late in life. It is the number one killer in some (many?) fish collections, but it is almost always attributed to “old age”.

It is found in nature in soil and uncooked seafoods, so its presence in aquariums is virtually assured. In cases where it has NOT be isolated in aquariums, it generally means that the proper culture was not performed, this bacteria is very slow growing, and it is difficult to culture because in the 6+ weeks it takes to grow, other bacteria tend to over-grow it on the test plates.

I know of no effective treatment for it, and besides, if you could “cure” the fish, they would get re-infected the next time it got introduced to the tank through feeding, etc.

It can become a huge problem in some fish collections because some species of fish are very sensitive to it; notably seahorses, pupfish, pirate perch and Haplochromine cichlids. In these fish, even middle-age specimens will die. I manage it by breeding the population fast enough to “outrun” the tendency for it to kill off the older fish.

Finally, it is a zoonotic disease and can be transmitted to humans. It doesn’t flourish in the human system (98 degrees is too warm for it) but it can cause lesions in the extremities. Wear gloves and never siphon by mouth, and if you think you might have immune system problems, check with a doctor. 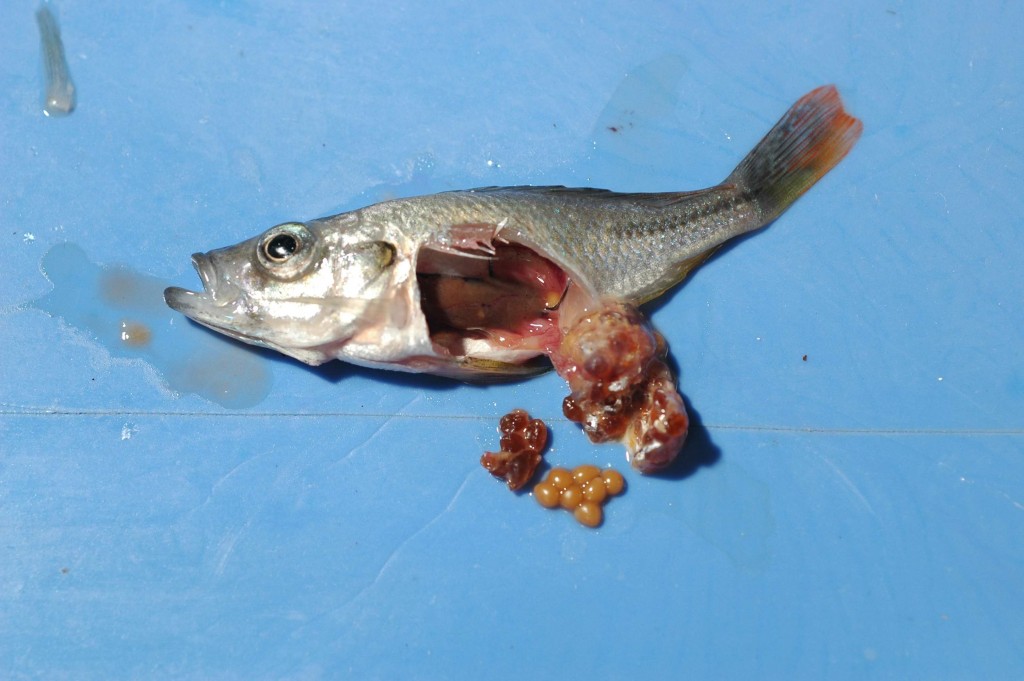 A female Piceatus cichlid with egg-binding, positive for Mycobacterium

I cringe whenever I see those really tiny hepatus tangs offered for sale for two reasons: First, if they have not been fed properly as they move through the supply chain, they get too thin and then it is hard to get them back into good condition. Secondly, ask yourself WHY the baby hepatus are being collected – they didn’t used to be seen, ever. Why now?

Could it be due to over collecting? The same thing happened to Atlantic angels in the 1970’s – we suddenly starting seeing 3/4″ French angels, because collectors couldn’t find enough of the 2″ ones. Florida passed slot size limits for those fish, but nobody seems to be doing that for hepatus tangs.

I’ve never been able to break the life cycle of Neobenedenia using formalin dips. The dips will kill the adults (166ppm for 45 minutes under good aeration) but returning the fish to the tank just re-infects them. Moving them to an uninfected tank *might* work after a formalin dip.  I sometimes go 10 (or even 14) days between treatments with Praziquantel if I suspect Neobenedenia…since they are egg layers, I want to make sure that any eggs have had a chance to hatch before hitting them with the second course. The dose should be 2 to 2.2 ppm, hobbyists who use Prazipro (which isn’t dosed in ppm), would have to rely on the label instructions.

One of my aquarists has had great luck in getting trumpetfish switched over to prepared food. The basic technique is this:

1) Get the fish feeding well on live guppies – but don’t wait too long at this stage – perhaps a week.

2) Next, fresh kill some guppies and get it feeding on those. Slap them into the water to get it interested.

3) Then freeze some killed guppies and transfer the fish over to feeding on them (this is a big deal – frozen fish must SMELL different or something).

4) Keep feeding it frozen guppies, then get the trumpetfish converted to feeding on frozen guppies with their heads cut off (predators often fixate on the eyes of their prey).

5) Once the trumpet is feeding well on the bodies of dead frozen guppies with their heads cut off, start introducing guppy-sized slices of other fish flesh, like smelt. When that is working well, you can pretty much toss anything in and the trumpet will eat it, krill, mysids, etc.

Typically use it at around 10 ppm – I’m not positive what that works out to be in terms of mg / gal, but I think it is on the order of 36 mg/gal.

In quarantine systems, it has a tendency to kill back your beneficial nitrifiers, and there is usually an ammonia spike. I deal with that using Amquel. In a well-established tank, I don’t know if you would see the ammonia spike or not.

A bit of historical perspective – back in the late 1970’s many aquarists used a “miracle drug” in their FO tanks called Marex. I learned last year that it actually was just chloroquine HCL.

Hobbyists often ask for help when they notice that their fish is laying on its side, or upside-down.  The term for that behavior is “moribund”. Fish rarely recover once they reach that level of a problem. If it’s a disease issue, generally, any medication will take more time to work than the fish has left. If it is some water quality issue, then moving the fish might bring it around – but you can use your other animals to determine that – if other, more sensitive species are fine, then you can rule out water quality.

I would like to expound a bit on my work on maximum fish sizes in captivity (previous blog entry). There seems to be some confusion about the study. Although only 19 fish met the criteria as outlined in the project, fully 2300 fish were analyzed as candidates, it is just that 2281 of them did not meet the strict criteria:

“None of them has grown appreciably in the past two years, and all have been in captivity at least 5 years (the range was 5 to 20 years).”

Also, the ONLY conclusion that I drew from this is that the maximum size of fish on Fishbase tends to run larger than what is seen as a maximum size in captivity – to the extent of it being 66% of that value. Remember that Fishbase lists the maximum recorded size for a fish – not the normal adult size. Their sample size (taken from the literature) is justONE fish. They also tend to “round up” their numbers. Think of their max size as the record size for that species.

This was just a starting point. The problem is getting enough additional data. How many fish in your own aquariums would meet the criteria? Still, I think we can safely say that stating the Fishbase maximum size as being the “adult size” for fish (as is often done on message boards) will be less precise than using a figure of say, 75% of that value.

Finally, there is still no real way (yet) to use the size of a fish and calculate what size aquarium that fish will need….so what does it really matter if you say that a particular fish will reach the Fishbase max. size or only 66% of that value, you still don’t have any real way to objectively apply that information…

Water temperature is very important for some species. You can infer this by their depth distribution. A fish that is found deep in tropical areas, but shallow in temperate regions is NOT going to handle warm water very well. An example would be Chaetodon modestus that is found at 200+ meters in Taiwan and at only 20m in cooler Suruga Bay.

With a few other fish, light is the limiting factor, two examples that come to mind are flashlight fish (found shallow on moonless nights and deep when the moon is out) and age, that hides deep in caves in shallow water, but comes out more in deeper water.

The only case of physical damage from light that I can think of is with deep sea isopods, Bathynomus. They will become blind when kept under normal aquarium lighting.

I think that most people “play it safe” and mimic the fish’s natural environment as close as possible, so that means keeping true deepwater fish at say < 20 footcandles of light.

Estimating the age of fish:

Physical size is probably the most important factor. Even with captive stunting effects, an older fish is going to be larger than younger ones of the same species.

Older fish tend to develop chronic issues, such as tattered fins, skin damage, cataracts, etc., that do not heal as quickly as in younger fish – and may not heal at all.

In captivity, many older fish suffer from fatty liver disease that can cause lethargy, ascites (abdominal swelling) and anemia.

Very old fish are less able to respond to environmental changes as well as younger fish, so moving an old fish to a new aquarium may result in serious problems.

Eventually, extremely old fish slow down and become moribund – just like people do. However, while they may slow down in regards to movement, their respiration rate may actually increase.

You can lower the specific gravity for a hypo treatment rather quickly – people routinely drop the specific gravity in half in just 24 hours time. This does not overtly stress marine fish. In fact, in cases where there is in active outbreak of Cryptocaryon, if people lower the S.G. too slowly, the disease keeps an upper hand, and the treatment may fail.

Raising the specific gravity at the end of the hypo treatment is where people get into trouble – this needs to be done VERY slowly, I’ll take five days or more to go from 1.011 to 1.022.

Also, if you decide to go as low as 1.009 (I don’t do that myself) you must be CERTAIN that your hydrometer is accurate and precise at that range. Too many times people go this low, not realizing that their hydrometer reading is off, and they end up with an actual S.G. of 1.008 or something, and fish may die.

Finally, be on the look out for an outbreak of Uronema while running hyposalinity…