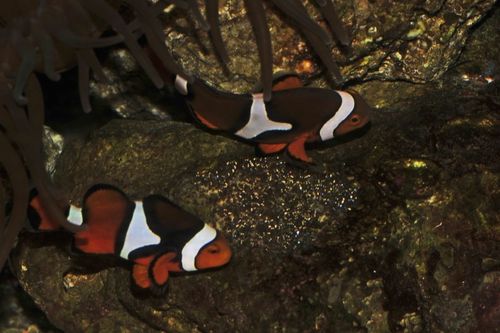 I first raised clownfish when I worked for the Shedd Aquarium back around 1986. Myself and another aquarist worked on raising some skunk clownfish, but since we did not have rotifers, we used “algae squeezings” basically microbes that we isolated from algal mats growing in our display tanks.  I think we raised a dozen or so that way.  In 1991, at the Toledo Zoo, we raised some Clark’s clowns in 1991 using Brachionus plicatilis rotifers being fed Nannochloropsis.  Since that time, I hadn’t worked with any clownfish until this year.  One of my departmental goals for 2008 to 2010 is to develop some marine propagation projects, but after a year of beating our collective heads against the wall trying to raise boarfish, Capros aper (We had gotten the boarfish to day 18, but then their spawning season ended). I decided to take a step back and try some easier clowns, to give my staff a chance to have some success before the boarfish season starts again in the fall. 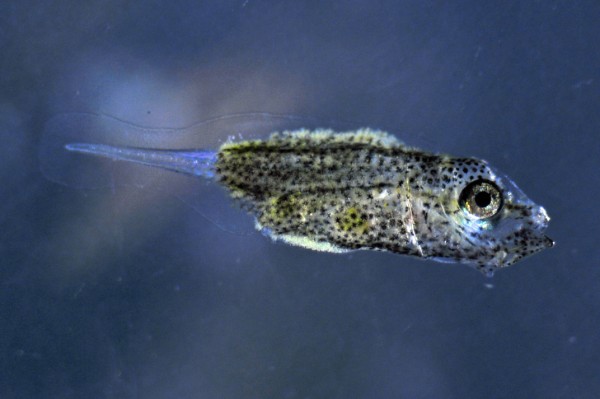 We have a nice pair of true percs from PNG, so I thought we would try those first. Our rotifer culture had lapsed when the breeding season for the boarfish ended, so the first task was to start that up again. Of course, the clowns laid eggs before we had any rotifers to speak of, and my staff still wanted to try with them, so we dipped up a 150 or so larval clowns the night they hatched and started them off on Tisbe nauplii being fed Isochrysis.

My recollection of my previous clownfish work doesn’t match what I saw this time around. I recall that the larva were gray/tan, couldn’t swim very well, and we were lucky to raise a dozen per brood. These true percs were a lot more active,  were a deeper orange color, and our mortality had been minimal (excepting a few lost in the first 24 hours due to trauma from being dipped up and moved to the black rearing tub).   We raised the larva at 82 degrees F.- pretty warm, so I thought things would be a bit quicker, but as of day 11 only one has metamorphosed, with four others having head stripes.  There was zero mortality from day 2 to post-metamorphosis, something I did not expect.  I feel that our painstaking work with the boarfish, although not yet successful, gave us the experience to make clownfish rearing much easier.  The copepod naups and the Iso probably worked together to enhance the nutrition of the larval clowns to a much higher level than we had seen before.  When we worked with rotifers, we would aim for a density of 5 rotifers per milliliter.  With the copepods, we had nowhere near that density, probably more on the order of one nauplii per 25 ml, yet the clowns thrived.  Using a round black polypropylene tub seems superior to the standard aquariums we used in the past – with the only drawback being that you don’t have lateral viewing of the larvae.

I came up with a quick, accurate and fairly efficient way to count the baby clowns.  I  took an overhead digital photo of the rearing tub, imported the image into Photoshop, enhanced the contrast so that the larval clowns showed up better, then used the computer mouse to click on each clown, counting them in turn.  By setting Photoshop to leave a blue dot with each mouse click, I could avoid counting a larva more than once. 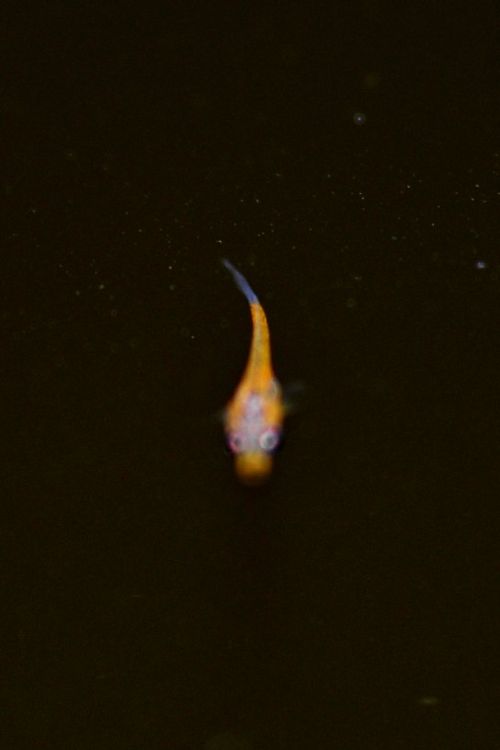 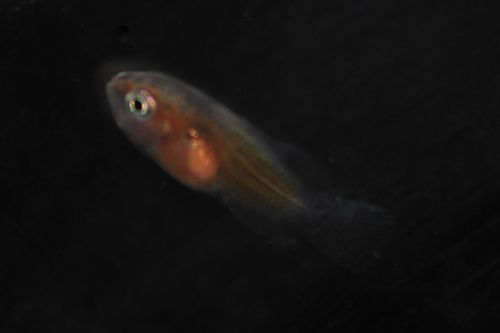 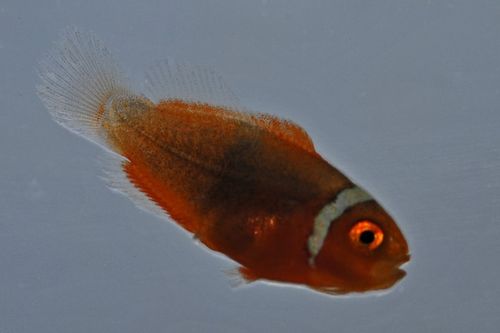 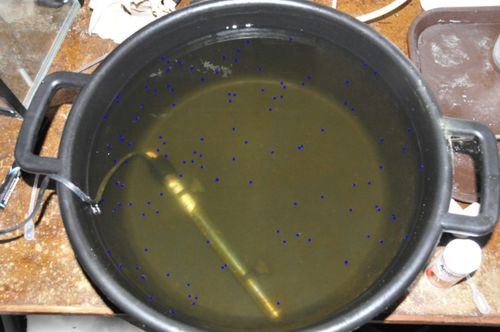 Each blue dot represents a larval clown in the rearing tub 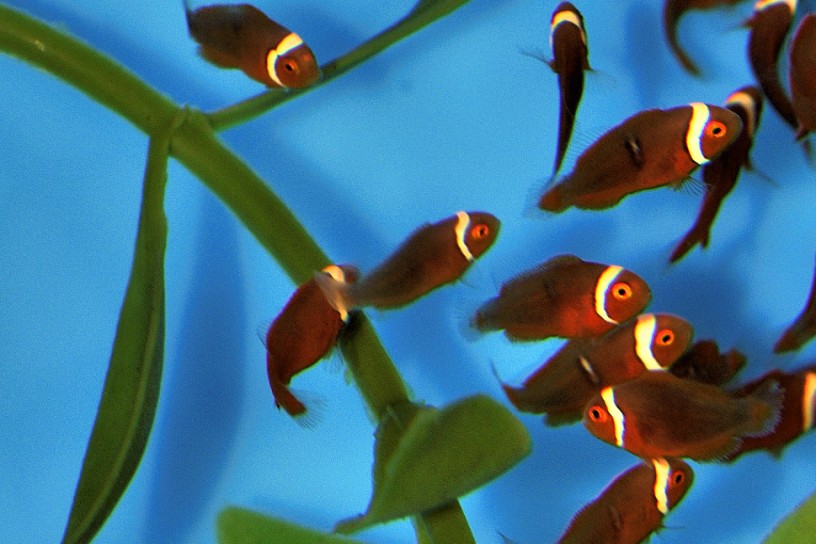 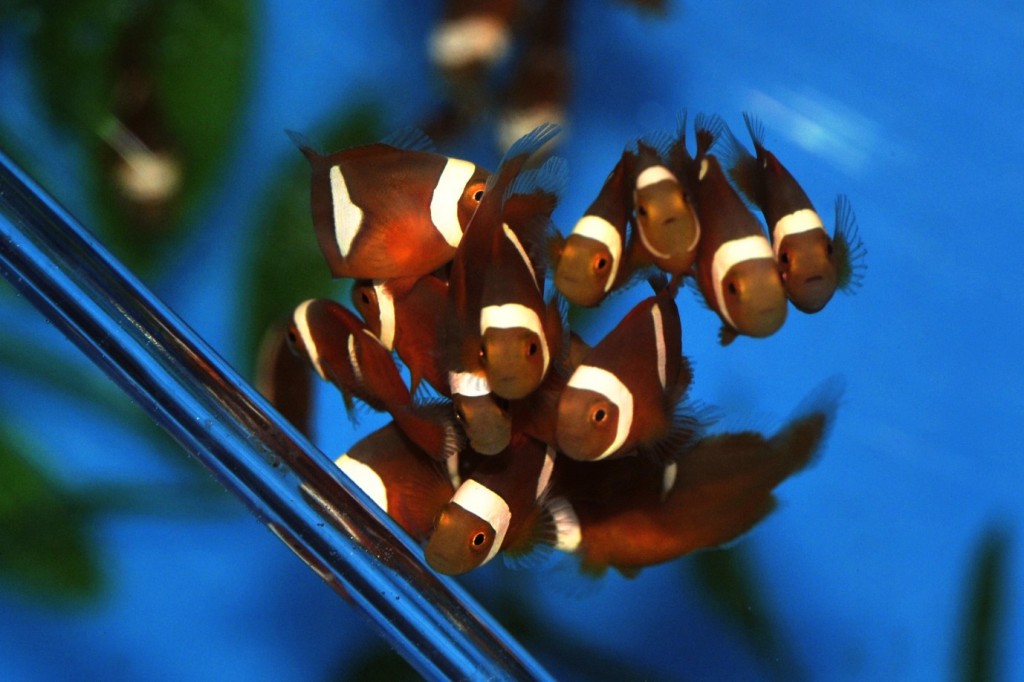