Happy Earth Day! Or maybe not so happy.

Yesterday (April 21) PBS aired the Frontline episode “Poisoned Waters.” Details and clips have been posted, together with some of the press reaction. 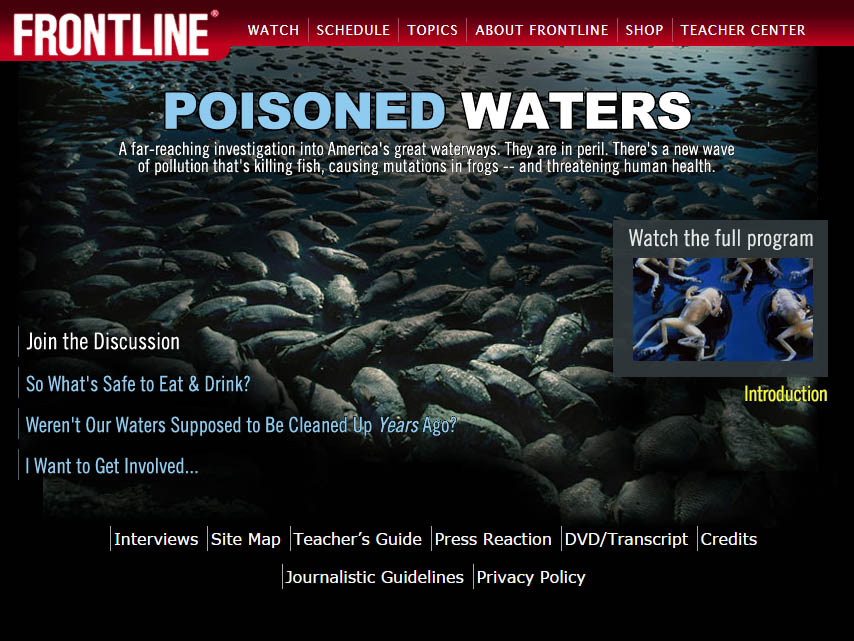 The program provides additional evidence of the degree to which human development and other activities threaten our aquatic heritage. Indeed, threaten our own survival. Presenting scientific observations such as the discovery of frogs with multiple limbs and male fish producing eggs, the producers demonstrate once again the degree to which fish and other aquatic life become “first responders” to the pollution of waterways.

As one might expect, the industries responsible for the problems have their heads firmly buried beneath the sand. In one of the highlights of the program, a poultry industry spokesman claimed, with a straight face, that nitrogen pollution finding its way into the Chesapeake Bay came not from the half million chickens housed in a factory farm on Virginia’s eastern shore, but rather from the wildlife in the surrounding woods. This would be funny if it did not demonstrate such craven disregard for the common welfare in the name of profit.

The challenges faced by those who try to protect watersheds were made clear in another segment of the program. In the region around Puget Sound, new land use regulations designed to protect the estuary have led to the formation of a committee of opposition. Comprised of property owners disgruntled by the new restrictions, the group allowed Frontline reporter Hedrick Smith to tape one of their meetings. During that taping one participant expressed surprised that residents have not resorted to violence in response to what he considered the unfairness of the new regulations. This portion of “Poisoned Waters” made all too clear the intensity of perceived conflict between individual rights and public health.

All environmental issues are ultimately about land use. In such matters, when water is involved, as it almost always is, activities far removed can create major impacts downstream. Inevitably, property owners will try to assert their rights, and in many cases do so with little regard for the rights of their neighbors. Such conflicts may well become the major focus of environmentalism in the 21st Century. “Poisoned Waters” did not attempt to offer specific solutions to the problems it uncovered. But it did make clear the urgent need to find answers to those problems, because our nation’s, indeed the world’s, waters cannot much longer bear the insults of unbridled development.