The Garden Reef: A Detrimental Trend 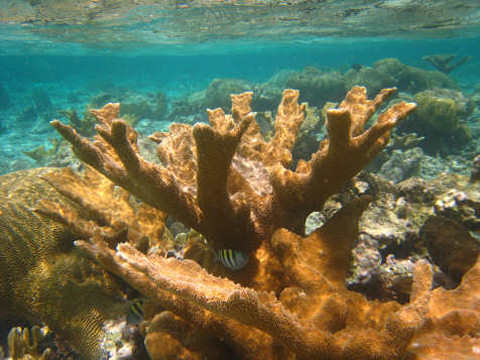 Coral in shallow water, Belize barrier reef. Notice the lack of species variety; all coral present is scleractinian in origin and requires intense lighting. An aquarium simulating these conditions would be a poor environment for ‘LPS’ or ‘soft’ corals. Image by Mike Maddox

A current trend in the hobby as of late seems to be the’conglomerate’ or ‘garden’ reef aquarium, with many coral species being crammed (for lack of a better word) into a reef aquarium with little to no consideration for the individual coral species’ requirements. This tendency towards an “all-in-one” approach detracts from the health of the animals within, because the aquarium conditions cannot possibly replicate the ideal habitat for such a variety of animals.

A common example of hobbyists combining animals that require wildly different conditions would be the trend of placing shallow water Acropora spp. species and Acanthastrea spp. animals in the same aquarium. Shallow water Acropora occurs on reef crests, in areas of extreme water motion and incredibly intense lighting. Acanthastrea corals hail from the outer areas of the reef, which are calmer and deeper, with higher turbidity. Replicating both of these conditions in one aquarium would be exceedingly difficult, if not impossible. Both of these species can obviously be maintained in the same aquarium for a time, but I ask of you, can they both be maintained in the same aquarium with optimum health, coloration, and growth? I think unlikely would be an understatement for this example.

To ensure optimum health of the inhabitants, I encourage hobbyists to build their reef aquarium replicating the natural conditions of the animals they wish to house, and choosing animals whose requirements are similar. This approach allows for healthier and more successful reef inhabitants, and helps minimize troubles stemming from competition and allelopathy. 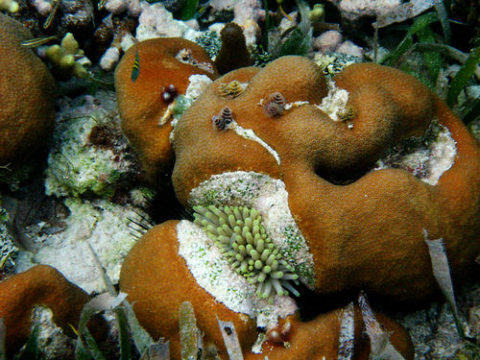 An anemone slowly destroying a scleractinian coral, a good example of what to avoid in the home aquarium. Grassflats, Drowned Cayes, Belize. Image by Mike Maddox

Another common occurrence I recommend avoiding is the placement of motile anemones with sessile coral species in the same aquarium. Contrary to popular belief, most of the anemone species commonly imported for the trade do not reside “on a coral reef”. Combing these animals in the same aquarium is not a recipe for long term success, as the the mobile anemone will eventually encounter a sessile coral, with detrimental results to both invertebrates. Please remember that “success” is not a term to be measured in months or even years, as the natural lifespan of anemones and coral can be measured in the hundreds (!) of years.

I hope that this short piece will encourage the reef aquarist to better prepare their aquariums with specific species and their requirements in mind so that long term success can be achieved! I feel that this approach is much more conscientious, ethical, and responsible than creating an unnatural hodgepodge of various corals chosen purely for aesthetics that are simply surviving in the short term.

Mike Maddox is a marine aquatics author and consultant. Visit him at Captive-Aquatics.com, or blog.captive-aquatics.com.